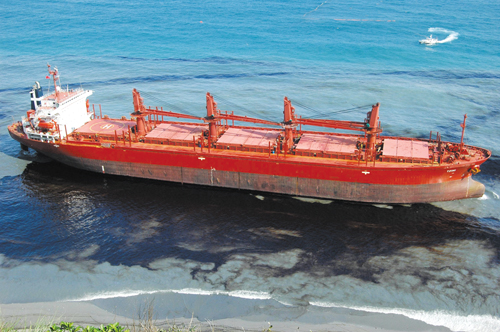 A vessel that spilled approximately 110 tons of oil into the area when it ran aground off northern Taiwan last Sunday will face another fine of NT$1.5 million, as the owner on Wednesday night secretly towed the ship away without permission from the Taiwan authorities.
The Environmental Protection Administration had ordered the 23,000-ton Malta cargo vessel "Tzini" to remain in the area until three conditions were met in order to prevent any further oil leaks from a tear in the ship's hull sustained when it ran aground on the Yilan Suao sandbar.
Amid environmental concerns of damage to a reef sanctuary in Nanfangao and a possible negative impact on marine life and fishing resources, the owner of the Tzini was fined NT$1.5 million on December 25.
The EPA ordered that the oil spill be cleaned up, the remaining fuel in the vessel be drained and that the management company present a full report on the incident before the Tzini could be cleared for departure.
However, the order was ignored and the vessel was towed away late Wednesday,according to a Coast Guard Administration official, Yang Yung-hsing.
"The Coast Guard was keeping a 24-your watch on the vessel, but on Wednesday the team went out on an emergency mission to rescue a boat that had lost power and the Tzini took advantage of the situation and the rising tide to slip away," Yang said. It was towed seven nautical miles to Suao Port without being noticed."
An EPA official Hsu Jen-tse said, after a preliminary investigation yesterday, it was fortunate that a second spill had not occurred during the process of moving the ship.
He said the Tzini violated the Ocean Pollution Control Act and will face an additional fine of NT$1.5 million as well as a lawsuit filed by the EPA.
Hsu added that the vessel will however be allowed to enter Suao Port for repairs after it has been confirmed there is no danger of further oil leaks.
The ship's insurance holder was quoted by the Central News Agency as saying that it will cover all damage caused by the spill in the Suao sea zone. However, the company that owns the vessel will appeal the EPA fines, the CNA said.
Chairperson of the Suao Fishermen's Association Lin Yueh-ying said yesterday that according to fishermen around the Suao port, the fishing nets around Suao and Dungao were heavily soaked with oil, and the sandbar zone was polluted as well.
"It is highly possible that fishermen will not be able to catch any fish in the area for the next six months," Lin said, adding the association will definitely bring a lawsuit against the related agencies.
Fisherman Lee Chun-kuang claimed that since the spill occurred, the fish caught around the Nangfangao area are not fit for consumption.
"The fish stink of oil - there is no way that they could be sold or eaten," Lee said.
Ilan County government official Chen Ching-ju noted it is easy to evaluate the visible damage, but the invisible damage caused by the spill would be difficult to assess, especially in the reef sanctuary in Nanfangao Port.