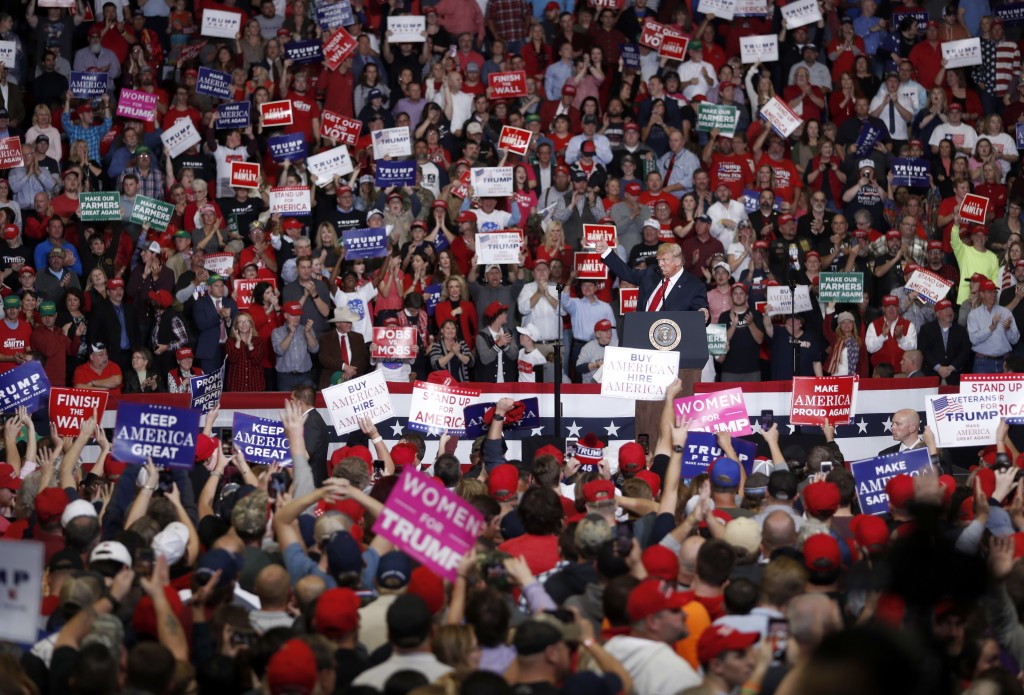 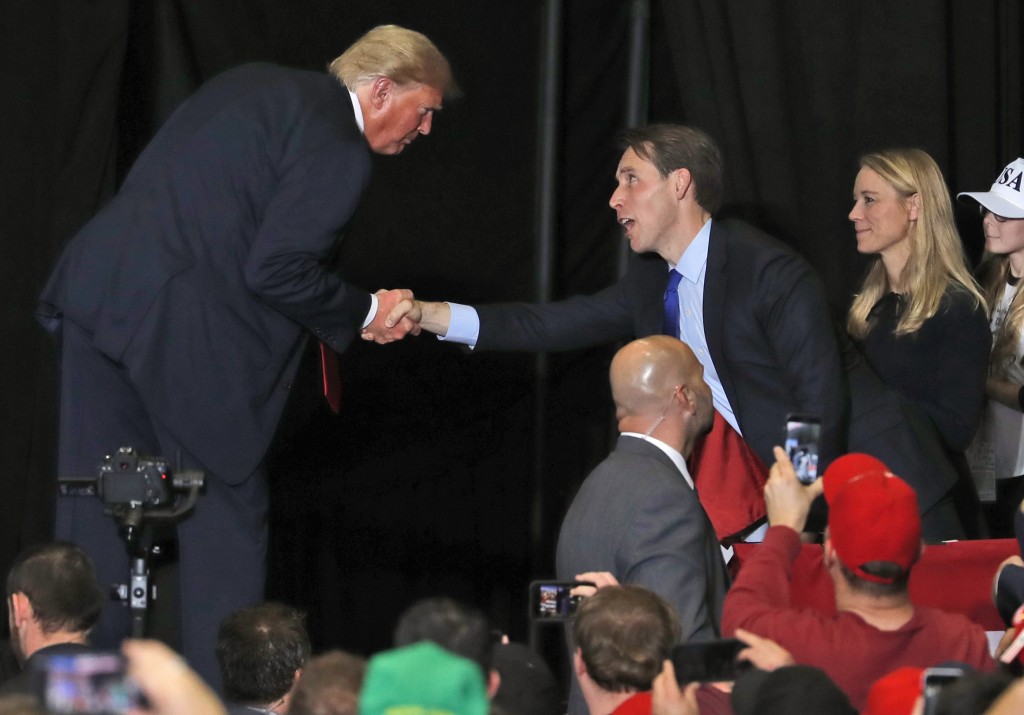 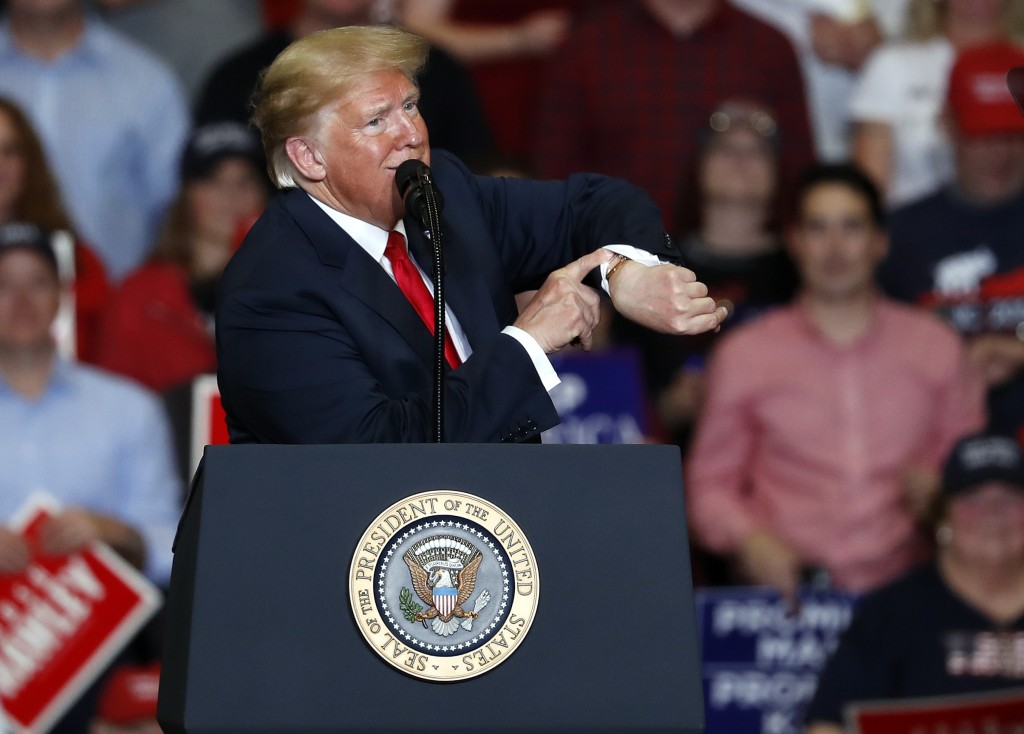 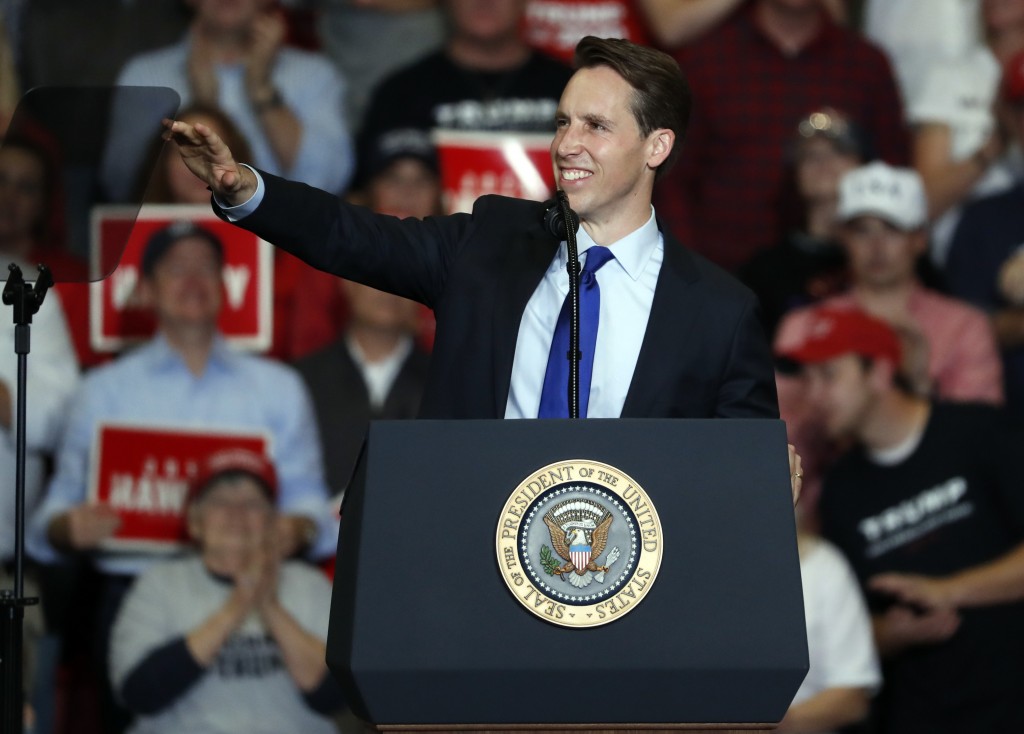 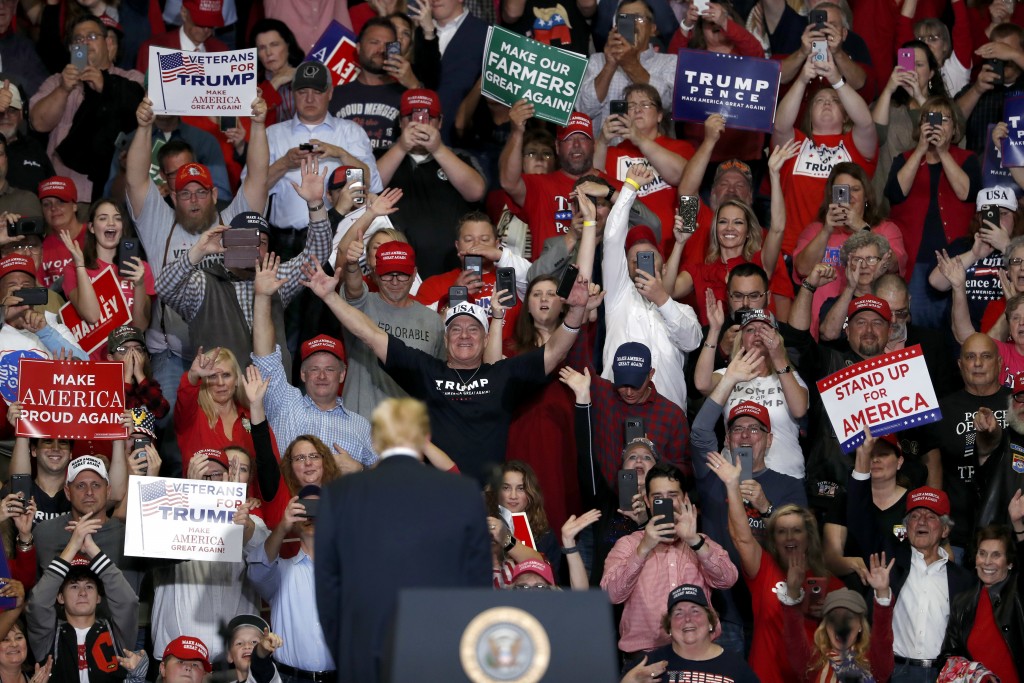 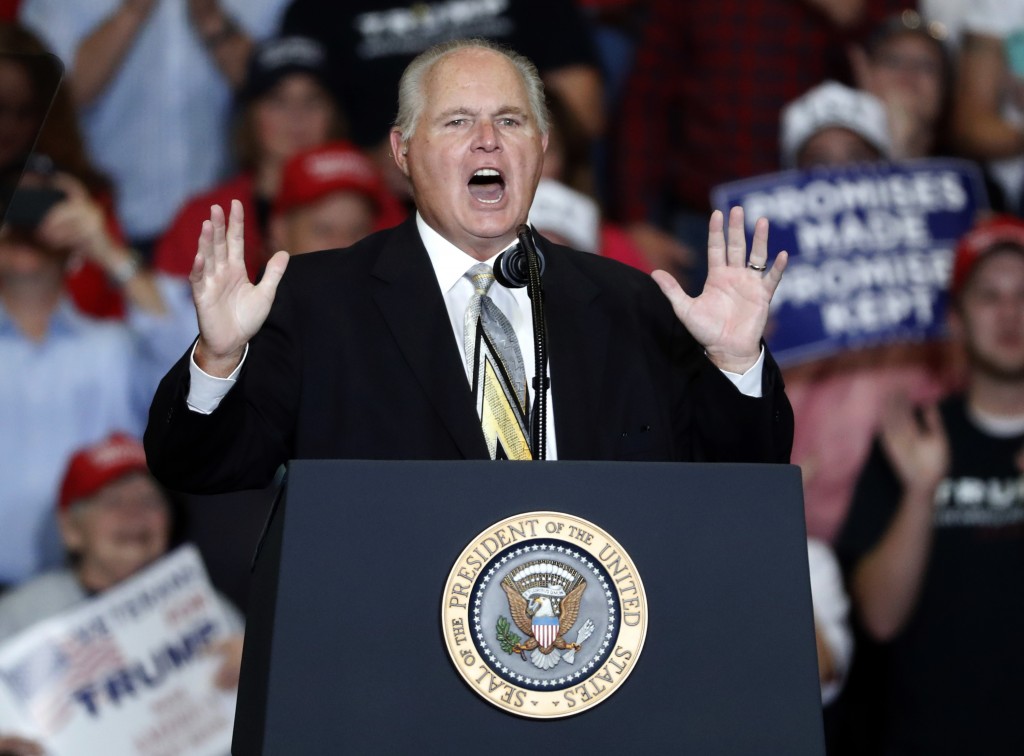 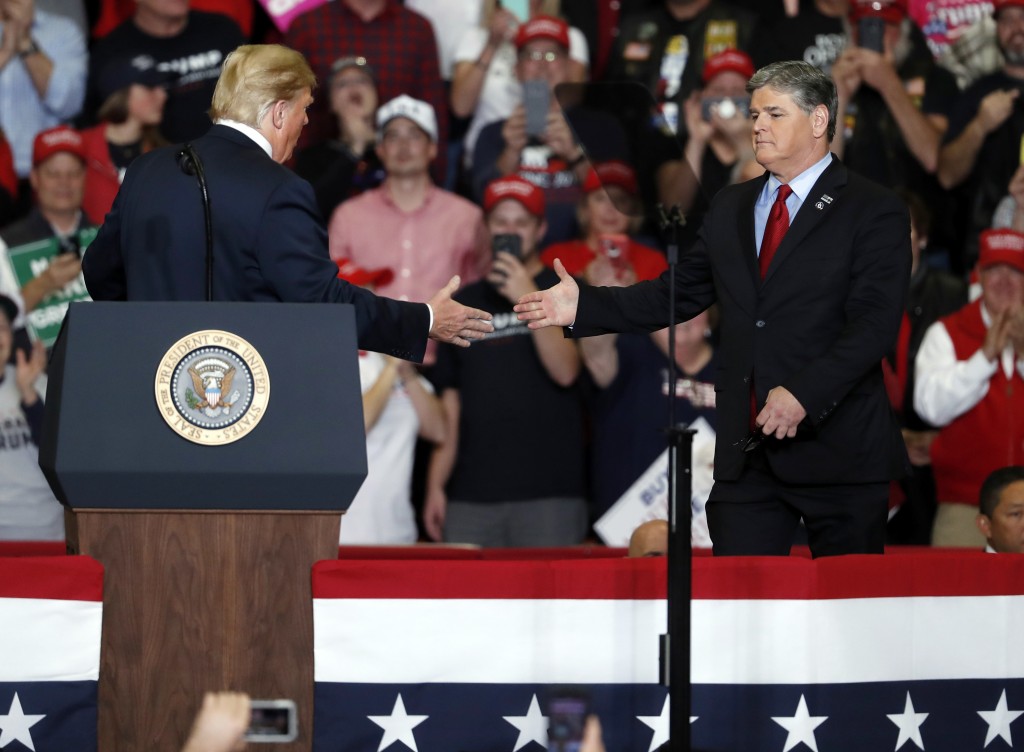 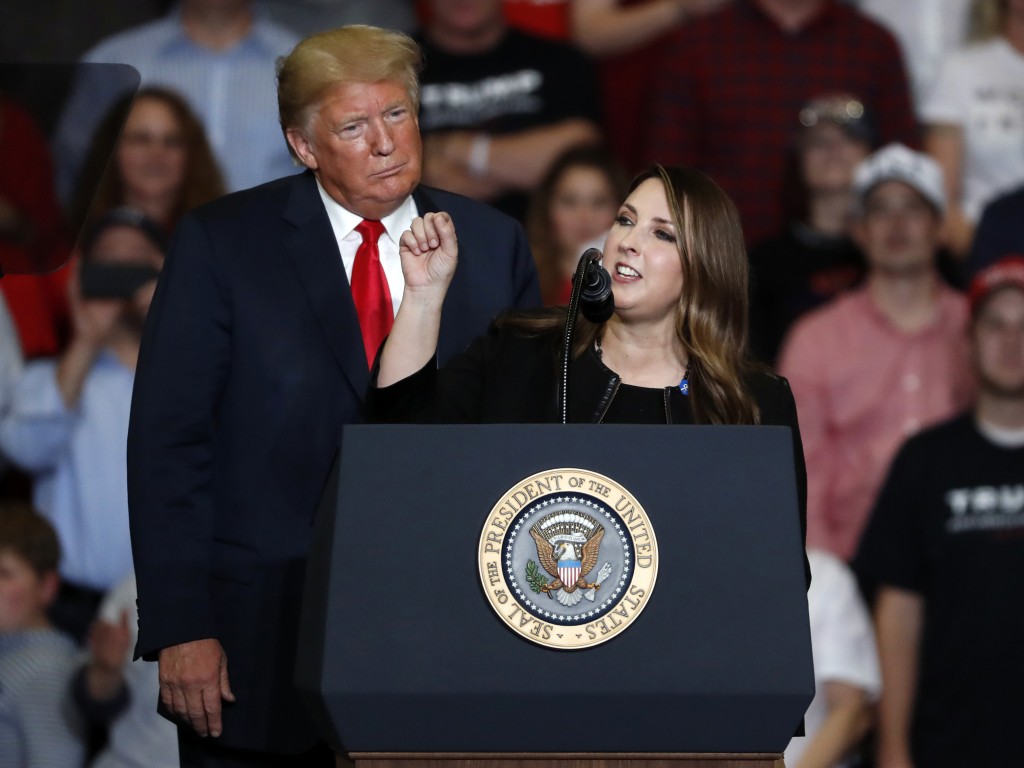 CAPE GIRARDEAU, Mo. (AP) — President Donald Trump, his shadow hanging over midterm elections that will determine the future of his administration, used his final pitch to ask voters to help preserve "fragile" GOP victories that could be erased by Democratic gains in Congress.

With the monthslong fight serving as a testing ground for his nationalist appeals and the strength of the coalition that powered him to the White House two years ago, Trump closed out a campaign season that has been defined by his racially charged rhetoric, hard-line immigration moves and scattershot policy proposals. Acknowledging the stakes in the closing days of campaigning, Trump stressed to voters that everything is on the line.

"It's all fragile. Everything I told you about, it can be undone and changed by the Democrats if they get in," Trump told supporters Monday on a telephone "town hall" organized by his re-election campaign. "You see how they've behaved. You see what's happening with them. They've really become radicalized."

In an election-eve interview, Trump struck a gentler note with media conglomerate Sinclair Broadcasting, saying he regretted some of his caustic campaign rhetoric.

"I would like to have a much softer tone. I feel to a certain extent I have no choice, but maybe I do," Trump said.

There was little of that on display as Trump spent his final hours on the trail Monday in Ohio, Indiana and Missouri, where his rhetoric on illegal immigration turned harsh and he lobbed attacks at Democrats.

In a Monday tweet, he warned that law enforcement was "strongly notified to watch closely for any ILLEGAL VOTING which may take place in Tuesday's Election (or Early Voting)." Trump has falsely claimed that millions of illegal votes were cast in 2016, which he says deprived him of a victory in the popular vote, and has stoked concerns, without providing evidence, of rampant fraudulent voting.

"I do eventually want to unite," Trump said in Fort Wayne, Indiana, "but I'm driving them crazy."

Trump has also sought to distance himself from any potential blame if Republicans lose control of the House, saying, "My primary focus has been on the Senate."

Whatever the outcome, Trump made clear he knew his political future was on the line.

"In a sense, I am on the ticket," he told a raucous crowd in Cleveland.

He warned supporters on the telephone town hall to get out and vote because "the press is very much considering it a referendum on me and us as a movement."

Republicans are increasingly confident they will retain control of the Senate, but they face Democratic headwinds in the House. In an interview with The Associated Press last month, Trump said he would not accept blame for a GOP defeat at the polls.

Trump has maintained a busy campaign schedule in the final stretch of the race, with 11 rallies over six days. In the closing days Trump has brought out special guests to join him. Country singer Lee Greenwood performed Trump favorite "God Bless the USA" on Sunday in Chattanooga, Tennessee, and appeared with the president Monday night in Missouri.

In Indiana and again in Missouri, Trump invited White House press secretary Sarah Huckabee Sanders and counselor Kellyanne Conway on stage to speak along with his daughter Ivanka Trump.

Fox News personality Sean Hannity and conservative radio host Rush Limbaugh served as "special guests" at the final rally, according to Trump's campaign, though Hannity insisted on Twitter he would only be "covering (the) final rally for my show." Trump, however, did call Hannity to the stage.

At his rallies and on Twitter, Trump's closing argument has largely focused on fear — warning, without evidence, that a Democratic takeover would deliver the country into socialism, spurring an influx of illegal immigration and a wave of crime.

Faced with low Republican enthusiasm, Trump is convinced that immigration will again be an animating issue for his base. He seized on the caravans of Central American migrants to reinforce an immigration message that recalls the racially charged immigration talk of his 2016 campaign.

"That's an invasion. I don't care what they say," Trump said Monday of the thousands of migrants marching toward the U.S.-Mexico border.

Trump has also used the confirmation battle for Supreme Court Justice Brett Kavanaugh to stir up his most loyal supporters, with his aides believing it to be one of the most effective arguments for bringing GOP voters to the polls.

"We energized the Republican Party with that," Trump said in Missouri. "The Democrats overplayed their hand."

In the final sprint to Election Day, Trump has pushed forward with rallies amid news events that would have halted previous leaders — holding a massive event in Illinois the same day a gunman massacred 11 people in a Pittsburgh synagogue.

Often the candidates Trump has traveled to support feel like supporting actors in the theater of his rallies, though in the final days of the campaign Trump has been more generous in his praise of the Republicans he wishes to see elected.

In cramped aircraft hangars and pack arenas across battleground states, Trump has boasted about the energetic displays of support from his most loyal backers, drawing parallels to his own White House bid. "There's electricity in the air like I haven't seen since '16," he said Monday.

"This is a very important election," Trump added, emphasizing the stakes. "I wouldn't say it's as important as '16, but it's right up there."

Trump's midterm efforts will not stop with his Missouri rally on Monday night. He plans to spend Election Day encouraging voters to get to the polls from the White House. And his own bid for re-election in 2020 is already underway.