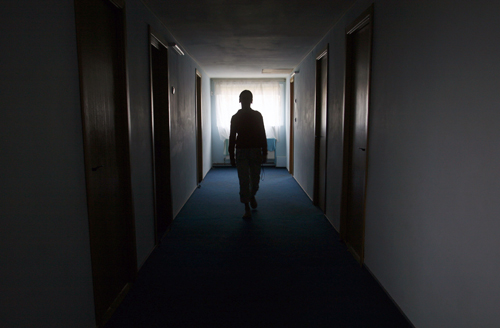 Anca thought girls who spoke on television about being sold into sex slavery were paid to invent such stories to boost TV show ratings.
That was until she answered a friend's invitation to join her in Germany and work as a dishwasher in a town near Hamburg.
When she arrived, her passport was taken away and her captors forced her to work as a prostitute for their clients.
Three months later she slid down two floors on a drainpipe, ran several kilometers through a forest and finally found a taxi that took her to a police station and safety.
"The girl who invited me won her freedom by bringing in two other girls," said Anca, a quiet 20-year-old from a Romanian village. She asked for her real name to be withheld to protect her from her captors.
As they prepare to join the European Union, Romania and Bulgaria are struggling to contain human trafficking and smuggling, particularly in drugs, which is endemic in the Black Sea region that will soon become the EU's eastern border.
Every year, thousands of women such as Anca, some as young as 13, are kidnapped or lured by promises of well paying jobs or marriage and sold to gangs who lock them up in night clubs and brothels or force them to work on the streets.
Observers say even more women could be at risk after the two countries join the EU in January and traffickers seek to increase business by taking advantage of easier access to western Europe, where most of the victims end up.
"There is a lot of exploitation in Romania and I am sure the numbers will get bigger," said Gina-Maria Stoian, Anca's case manager and the director of The Adpare Foundation, a Romanian organization that helps victims of human trafficking.
"Already there is sex tourism around the Black Sea."
Criminal routes
Romania and its southern neighbor Bulgaria are among 11 countries listed by the United Nations as top sources of human trafficking, based on reported numbers of victims.
Other countries in the region, the poorest in Europe, are also hotbeds for organized crime and illegal trade such as Moldova and Ukraine.
Poverty and disillusionment with the region's slow reforms after the collapse of communism, and the fraying fabric of society following decades of forced repatriation of many communities help the gangs flourish and find easy victims.
"There is poverty, dysfunctional families, mentality. The girls have no roots, no self-esteem," said Iana Matei, who runs Reaching Out, a Romanian charity that helps trafficking victims.
"The traffickers now look for 13 to 14 year olds. They are easier to control. They are trained and brain-washed here. They see they can get little help from police, the system. And they think they can make money and become independent," she said.
Geography is also a problem. Bulgaria and Romania are part of the "Balkan route" for transporting heroin from Afghanistan - which produces the vast majority of the world supply of poppies - to Western Europe. Eighty percent of Afghani heroin reaches Western users through this route.
"Romania will be the final border, the final frontier of the EU," said Cristian Duta from Bucharest's SECI Center, which supports trans-border crime fighting in southeastern Europe. "It will be the first step for anyone who wants to get into the EU."
Fighting abuse
Some observers worry that Romania and Bulgaria's membership of the EU could aid the spillover of illicit trade that plagues the Black Sea region into the west.
Bucharest and Sofia governments say they are doing all they can to combat trafficking and abuse. Romania has won praise from Brussels for reforming border controls, combating endemic corruption and improving police cooperation.
But the EU has been more cautious on Bulgaria, rapping Sofia for not doing enough to fight rampant organized crime.
"Our borders are a 100 percent secure," said Dumitru Licsandru, who runs Bucharest's state agency against human trafficking.
The agency's data shows about 1,400 Romanian victims of trafficking, including sexual exploitation and forced labor, were identified in the first nine months of this year, while some 200 perpetrators were arrested.
Sofia's interior ministry's organized crime unit said 4,000-5,000 Bulgarian women are trafficked a year.
"We cannot deny the fact the problem of trafficking exists," said interior ministry spokeswoman Katya Ilieva, adding that the numbers had dropped compared to previous years.
Observers say official figures on the numbers of people trafficked show only the tip of the iceberg.
Aid workers say police work is not enough. Governments need to train judges and prosecutors, better protect victims and fight corruption which still allows traffickers to take women through borders or keep underage girls on the streets.
They also need to change the mentality in the traditional Balkan societies which often blame victims for their plight.
"My girls all knew about trafficking. But they thought it only happened to whores," said Matei, whose charity assists girls caught up in prostitution rings.