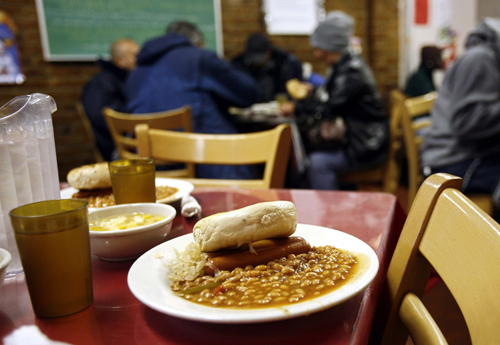 Food or rent? That is the daily choice faced by about 1.2 million of New York's 8.2 million people.
Faced with that choice, mostly they pay rent and rely on emergency or charity food to survive, poverty activists say.
"It's a struggle," said 53-year-old Pierre Simmons, who has a part-time job, as he wrapped up a bagel from his soup kitchen lunch for later. "I have a job, but the cost of living is so high it makes it hard to buy food."
Hunger is not unique to New York. More than 12 million U.S. households - or 35 million Americans - struggled with hunger in 2005, according to the U.S. government.
But of all places in the U. S., New York has perhaps the most visible income gap.
While the city's Wall Street bankers are due to collect nearly US$24 billion in bonuses this year, more than one-fifth of New Yorkers are battling to make ends meet below the national povety line of US$10,000 a year for an individual.
About 3,800 people were living on the streets in 2006, according to New York City statistics.
From a 9,000 square-meter warehouse in an industrial section of New York's Bronx borough, Food Bank For New York City distributes more than 30 million kilograms of food a year to more than 1,200 community groups and charities in the city.
"I feel angry that we still need to be in this kind of business," said Lucy Cabrera, the Food Bank's president and chief executive.
"I would rather be giving my expertise to try and solve the hunger issue in a third world country, where they have no food. Here we have the food," she said, as workers zipped about the warehouse floor on pallet jacks filling agency food orders.
On the other side of the Bronx, people began to gather outside a soup kitchen operated by Part of the Solution as rain started to drizzle from the sky.
"When I first came here it was a lot of minorities, drug users, now it's the families, the struggling person," said Executive Director Sister Mary Alice Hannan, who has worked at the organization for 10 years.
"There's just some kind of a lack of awareness of the size of your family versus your income, your ability to live," Hannan said.
One quarter of New York's 1.9 million children are living in poverty, 40 percent of families with children had difficulty affording food in 2005 and one-fifth of the city's children rely on free food to survive, according to a report by the Food Bank For New York City.
The Part of the Solution soup kitchen, in operation for 25 years, serves about 325 lunches and dinners a day and gives out around 2,700 generically packed shopping bags, each containing nine meals.
On a weekday shortly before Christmas, hot-dogs and baked beans, served with a bagel, are on the menu at Part of the Solution. More than 100 people stream through the doors during a three-hour lunch window and strangers sit silently together to eat.
"You don't have to be homeless to be hungry," said POTS kitchen manager Daune Moore, who is known as Diz, as she stood with her arms folded watching over the lunchtime crowd.
Ironically, many people struggling with hunger are also battling the bulge, and both the Food Bank For New York City and Part of the Solution aim to provide nutritious, balanced meals.
"I get my child a hamburger, French fries and soda and they're satisfied and it's only cost me 99 cents - I go to the supermarket and I can't even get a can of beans for that," Cabrera said.
The Food Bank for New York City, which helps distribute food for 250,000 meals a day, hands out more than 11 million pounds a year of fresh produce.
"It's about being able to feed people in a way so that they stay healthy, continue to work." Cabrera said.
But for some at the Part of the Solution soup kitchen, working is no longer an option. Virgilio Avilus, 45, limps back to his table carrying his lunch. In 1988 he was working as a window washer, earning up to US$1,000 a week, when he fell four floors.
After spending six months in a coma and 10 years in hospitals, Avilus now has an apartment of his own that costs him US$200 a month rent. His government income is US$250 a month.
"That's all I have to my name," he said. "I have to eat here. I can't be spending US$10 a day on food."