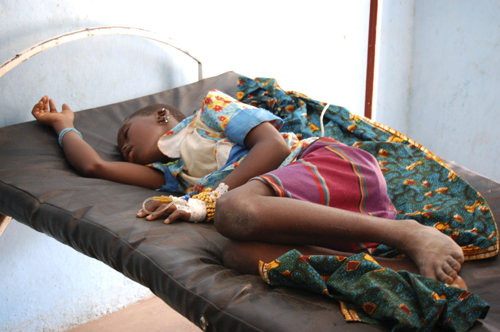 A young girl, unconscious by the time her mother brought her to a rural clinic in southern Burkina Faso, had the classic symptoms of meningitis: fever, stiffness, vomiting.
With treatment, doctors hoped to be able to save her life although she may be permanently disabled: deafness, epilepsy or paralysis are among the effects of the disease.
This latest outbreak in the remote Leraba region bordering Ivory Coast triggered alarms far away in the capital, Ouagadougou, amid fears of another epidemic wave of the disease.
In the arid Sahel region south of the Sahara, every year from December through May thousands of people, many of them children, get meningitis. Up to one in 10 who contract the disease die.
Africa's "meningitis belt," stretching from Senegal to Ethiopia through some of the world's poorest and most war-scarred places including Sudan's Darfur, accounts for more than half the cases of the disease worldwide each year.
Climate conditions such as dust wind and cold nights increase the risk of the illness along with overcrowded living and the movement of large populations.
Now health workers using high-tech methods to diagnose, control and even predict the disease hope to reduce its grim toll.
They say a new low-cost vaccine, lasting longer than those currently available, could be available as soon as 2009. A new test should make diagnosis quicker. And by studying the climate, they hope to be able to tell in advance where the disease will hit, and intervene before the first patient gets sick.
Experts say the new vaccine could eradicate meningitis from a community in much the same way that sustained vaccinations have all but wiped out polio worldwide.
"That is going to change the face of epidemic meningitis in the region," said William Perea, a World Health Organization meningitis expert.
New epidemic
Meningitis cases in the region reached a 20-year low in 2005. But then by April 2006, more than 30,000 had been reported to the WHO - five times as many as the previous year.
The pattern is typical. Since the 1970s, there have been meningitis epidemic waves every decade or so, each lasting three to four years.
Experts say last year's surge signals the start of another major epidemic in the Sahel region. In a worst-case scenario, according to WHO estimates, there could be as many as 160,000 cases in the next two years.
Meningitis is an infection of the thin lining that surrounds the brain and spinal cord. It is caused by different bacteria but when diagnosed early and treated with antibiotics many patients recover fully.
It can cause complications including brain damage, deafness and learning problems. About 5-10 percent of patients die from the illness, according to the WHO.
It is an infectious illness that is spread by sneezing, coughing and living in close quarters. Early symptoms include a stiff neck, headache, fever and sensitivity to light.
Health workers across the meningitis belt report cases to a central agency, in cooperation with the WHO, every week.
"In a district of fewer than 30,000 people, we try to compare the figures from two weeks," said Salam Sanne, director of emergency medicine in Burkina Faso for Medecins Sans Frontieres (Doctors Without Borders), who helped treat the girl.
"If there are two cases, and next week there are four, then we consider it an epidemic."
When the alarm is raised, medical teams spring into action to supply extra antibiotics and launch a vaccination campaign. But the WHO's Perea said the current system is not enough.
For one thing, it is too slow because vaccines are targeted against specific strains of the disease. Identifying each means first sending a bacteria sample from the patient's spinal fluid to a laboratory: "The whole response may be delayed," he said.
And the current vaccine is not effective enough.
New test
"The current vaccine has a short-lived immunity. In three years there is no more immunity," said Perea.
A quick and simple diagnostic test, now in final trials at Niger's center for Medical and Health Research, should help.
"You just put a few drops of the cerebral-spinal fluid in the tube and you put your dipstick inside your tube and about 10 minutes later you will have the result," said Suzanne Chanteau, director of the research team that developed the test.
Her team, known by its French acronym CERMES, is also working on improving predictions of where the next outbreak will hit.
"There is a hypothesis that the low humidity in this region and also maybe the dust winds are favorable conditions for the development of infection," Chanteau said.
Researchers use satellite data to track Sahara dust storms and determine the extent of the connection between the dry, dusty air and meningitis.
"We want to have atmospheric conditions categorized and be able to say if ... there are favorable conditions to have meningitis or not," says Isabelle Jeanne, head of the Geographic Information Systems-based project at CERMES.
"The whole time-length will be shortened for intervention," Perea said, adding that vaccines and other new technology should help "eliminate epidemics from the belt."