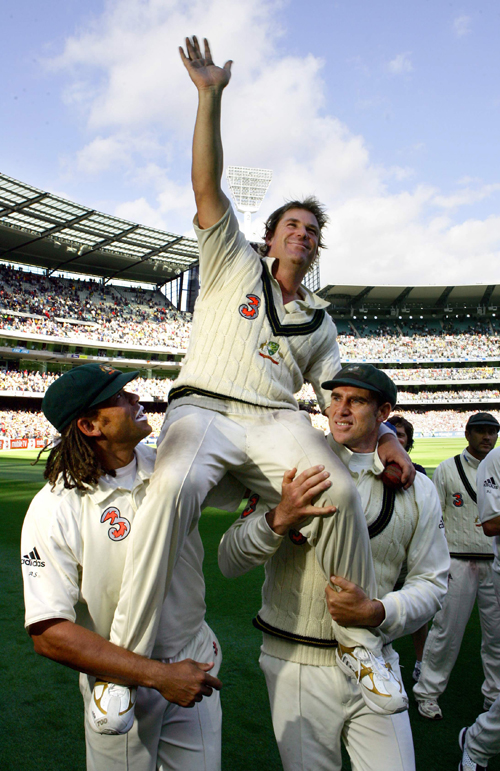 Australia will go to Sydney aiming for the first 5-0 Ashes series clean sweep in 85 years after crushing England by an innings and 99 runs in the fourth Test at the Melbourne Cricket Ground yesterday.
The Australians, hellbent on exacting full revenge for losing the Ashes in England last year, routed the tourists for 161 in their second innings off 65.5 overs to win the Boxing Day Test inside three days.
Led by pacemen Brett Lee and Stuart Clark, Australia wrapped up the comprehensive victory at 5:44 p.m. local time and will be out to emulate Warwick Armstrong's 1921 team when they shoot for a series clean sweep in the fifth Test, starting on Tuesday.
It was Australia's 15th win (one drawn) in their last 16 Tests since losing the Ashes in September 2005.
Lee captured 4-47 off 18.5 overs and Clark claimed 3-30 from 16 overs, including the pyschological wickets of Kevin Pietersen (1) and skipper Andrew Flintoff (25).
It was another sorry England batting performance following their abject first innings of 159 off 74.2 overs after winning the toss and trailed by 260 runs on the first innings.
Clark triggered England's demise when he bowled Alastair Cook and Pietersen in the hour after lunch when England slumped to 49 for three.
Cook got an inside edge onto his stumps and was bowled for 20 and Ian Bell was leg before wicket for the second time in the Test when trapped by Glenn McGrath for two to give the retiring paceman his 557th Test wicket in his 123rd match.
Pietersen, promoted above Paul Collingwood to No.4 in the order, lasted just nine balls before he was beaten by Clark and bowled off-stump for one.
Collingwood was out for 16 in a soft dismissal, taking a Lee delivery on the rise and driving straight to Justin Langer close in to the wicket.
Andrew Strauss was out to the fifth ball after tea, nibbling at Lee to be caught by Gilchrist for 31 in 174 minutes.
Clark struck again for the third time, trapping Flintoff leg before wicket for 25 to expose England's brittle tail at 108 for six.
Shane Warne removed Sajid Mahmood (0) and Steve Harmison (4), both lbw, for his 706th Test wicket.
Lee had Monty Panesar caught in the gully for 14 and clinched victory when he bowled Matthew Hoggard for five. Wicketkeeper Chris Read remained not out on 26 in 127 minutes.
Warne, playing in his last Test in Melbourne before he retires after next week's final Test, remained unbeaten on 40 with six fours in Australia's first innings of 419.
McGrath, who will also retire from Test cricket in Sydney, was last man out for a duck, giving Mahmood four wickets for the innings, while wicketkeeper Chris Read marked his debut Ashes Test with six catches.
Andrew Symonds only added two runs to his overnight total before he was out for 156.
He had a rush of blood and chased after a wide ball from Steve Harmison to edge to Read and end his five-and-a-half hour knock containing 15 boundaries and the six off Collingwood, which brought up his maiden Test century on Wednesday.
Clark gave Read his sixth dismissal off Mahmood for eight before McGrath lasted six balls for his 35th Test duck, second only in Test cricket to West Indian Courtney Walsh (43).
McGrath and Warne walked off the Melbourne Cricket Ground (MCG) together to a huge ovation from the crowd, sensing their likely last innings at the famous ground before their retirements.
Mahmood finished England's most successful bowler with 4-100 off 21.3 overs with Flintoff taking 3-77 off 22 overs.