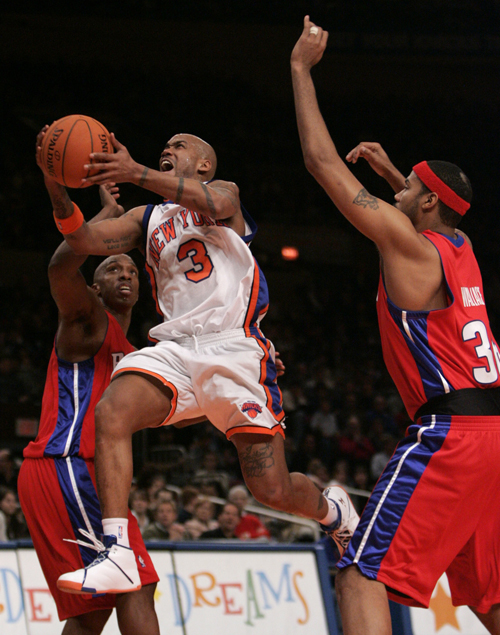 With the Garden rocking Wednesday night, Isiah Thomas' Knicks once again proved that nothing comes easy to them - nor rather expediently.
Winning their third overtime game in 10 days, their third of the season requiring multiple extra sessions and their second three-overtime affair, they took the Pistons not just to the wire, but well beyond in a classic 151-145 victory over the East's best team.
They got a Starbury night from Stephon Marbury, a season-high 41 points, including three free-throws to tie the game with 22.4 left in the first overtime, before he fouled out at the 2:05 mark of the second extra session.
They got a Mr. Inside supporting performance to Marbury's Mr. Outside from Eddy Curry, who scored 33.
They even withstood Carlos Delfino's game-tying three with 5.3 seconds left in regulation, plus Richard Hamilton's career-high 51 points, 12 in the first two overtimes. Yet, Hamilton scored none in the third extra session and got called for a critical technical with 13.6 seconds left and the Knicks up three).
Meanwhile for the Knicks, the standout performances just kept on coming.
David Lee double-doubled for the sixth straight game and team-leading 16th time overall (11 points, 13 rebounds). Jamal Crawford did likewise with 29 points (nine in the final overtime) and 11 assists and Channing Frye scored 26 - which included a game-tying right-wing 21-footer at the end of the second overtime.
All that production, Thomas' dream template, and still the Knicks had to work long and hard to seal the deal because they couldn't find Delfino (6-for-8 for a season-high 16 points) in front of (the absent) Spike Lee's seats at the end of regulation. They also couldn't contain Hamilton all night and finally couldn't keep up with the Pistons in the final five minutes.
Thus, they flew off to Phoenix for the start of a five-game West Coast trip today 7-4 for the 11-game December home stretch with which they hoped to revive their season.
With Jared Jeffries back in the starting lineup, the Knicks squandered leads of 11 in the first half and five in the seconds and by the 7 {-minute mark of the final quarter, trailed the Pistons by five.
Yet, Flip Saunders' team (which has now won six straight) couldn't put the Knicks away, with Frye's left-wing jumper on textbook pick-and-roll execution with Marbury giving the Knicks a 112-111 lead with 58.9 seconds left.
But they were up 116-113 after two Frye free throws with 9.7 seconds left when Thomas' team couldn't find Defino, who drained his third straight three to tie the game and Crawford missed a 15-footer at the regulation buzzer.
In the first overtime, after trailing by five with 2:17 to play, Marbury first scored on a penetration drive, then drew a Chauncey Billups foul behind the arc with 22.4 left and drained all three free throws to tie the game at 122 - where it remained when Billups missed a three and Nazr Mohammed a tip for the win.
In the second overtime, Detroit led by as many as four and would've led by that many again with 8.6 seconds left had Chauncey Billups (an 88.5 percent free-throw shooter entering the night) not rattled out the first of two free throws.
Following his made second, Crawford came down the floor, seemingly looking for his eight game-winning shot as a Knick. Instead, he found Frye on the right wing and the Knicks' second-year forward beat the buzzer for another tie.
In the third overtime, Curry's three-point play 35 seconds in gave the Knicks their first lead since regulation and they never relinquished it.
Once 1-6 at the Garden, the Knicks bid adieu to the building for the next two weeks having accomplished one thing this month: turning their home floor into a friendly place, instead of a feared one.
"I don't think we're looking forward to leaving the Garden," Thomas said. "It's like warm bath water right now."
It was also an exceptionally comfortable place during the 17-3 second-quarter run with which they built an 11-point lead while defending the Pistons' suspect second unit into a 1-for-7, four-turnover funk.
It was also fairly entertaining when Jamal Crawford had the ball as he racked up seven first-half assists, five in the first quarter and two on no-look, over-the-shoulder feeds.
Still, despite 21 points from Curry (11 in the game's first six minutes), plus 19 from Marbury in the first two quarters, the Knicks exited at halftime up only 61-60. And that was only because of a perfectly executed Jeffries-to Curry-to Marbury play in the final three seconds for a buzzer-beating three by Marbury.
Crawford and Thomas picked up late technicals, Thomas when he animatedly protested a second delay-of-game call against his team that also produced a third technical - and which was a no-brainer, when Steve Francis tipped the ball toward midcourt after a Jeffries follow-up score.
In other NBA action Wednesday: Cleveland 89, Atlanta 76; Toronto 100, Minnesota 97; Washington 114, Charlotte 107; LA Lakers 106, Orlando 93; Houston 96, New Jersey 71; Milwaukee 112, Memphis 96; Chicago 109, Miami 103; Sacramento 101, Philadelphia 76; Portland 100, New Orleans 85; LA Clippers 100, Boston 77.