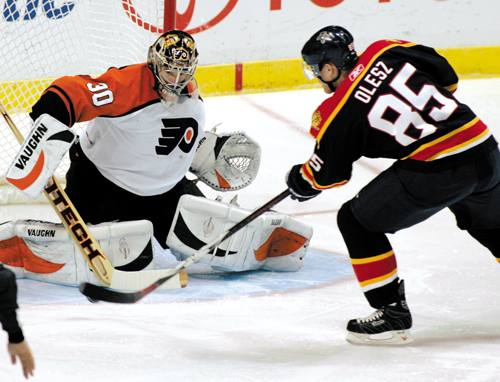 Wednesday night was one of the rare times the Panthers didn't have to worry about being at their best.
Yes, the Philadelphia Flyers are that bad.
Florida got an early goal from Rostislav Olesz and held off Philadelphia 3-1. It was Florida's first victory in the final game of a back-to-back set, with the Panthers entering the night 0-7 in such circumstances.
And, for the most part, the Panthers looked like a team that had flown to and from Raleigh, North Carolina - and played the defending Stanley Cup champs - in a span of less than 24 hours. Good thing the Flyers, who extended their franchise-record losing streak to 10 games, were on the schedule.
"I guess we did what we needed to and got the win,'' Jay Bouwmeester said. "Sometimes you need that.''
Not only are the Panthers 15 points in front of the Flyers, who are last in the Eastern Conference, but they are a point behind idle Tampa Bay for fourth in the Southeast Division and three back of Washington for third.
"You hope this gives us a little more confidence,'' said Jozef Stumpel, who got Florida's second goal. "This is a good win. We had to keep them down and give ourselves a boost.''
Philadelphia has the fewest victories in the league (eight). And things don't get any better: Wednesday's game was the start of an eight-game trip.
The Flyers haven't won since beating the Islanders on November 30, which pulled them to two points behind the Panthers. They've gotten just one point since.
"When a team comes in like this that's struggling,'' Bouwmeester said, "you have to jump on them early. Any time a team has been losing, they're dangerous.''
The Panthers did just that, flooding the Flyers zone after Olli Jokinen won the initial faceoff. After goalie Antero Niittymaki made his second stop in a 20 second span, Flyers defenseman Alexei Zhitnik lost control of the puck when Olesz swooped in.
Olesz fired the stolen puck past Niittymaki, and 30 seconds in, the Panthers were ahead.
"I just saw the puck and I picked it up and went in front of the net,'' said Olesz, the game's first-star, whose goal was the second-fast in a Panthers game this season.
Florida continued to dominate, but nothing got past Niittymaki until early in the second period, when Martin Gelinas sent long wrist shot that was nicked on its way down by Stumpel.
Philadelphia made it 2-1 at 7:38 of the second period when Kyle Calder took advantage of a five-on-three situation and wrapped a shot through Ed Belfour's legs.
Defenseman Mike Van Ryn made it 3-1 midway through the third period by taking Chris Gratton's faceoff winner and, from 50 feet away, beating Robert Esche, who had replaced Niittymaki.
"I thought we bounced back after Tuesday night's game and it was important to see that,'' coach Jacques Martin said.
Belfour was solid during a fairly easy night in net, stopping 23 shots.
Forward Janis Sprukts was returned to Rochester of the American Hockey League on Wednesday. David Booth was called up to replace him.
Flyers captain Peter Forsberg returned to the lineup Wednesday. Forsberg had missed three games after suffering a concussion December 16.
In other NHL action Wednesday: Ottawa 2, NY Islanders 0; Atlanta 4, Pittsburgh 2; Detroit 3, Minnesota 1; Montreal 4, Washington 1; Dallas 5, Colorado 4; Vancouver 6, Calgary. 5 (OT).