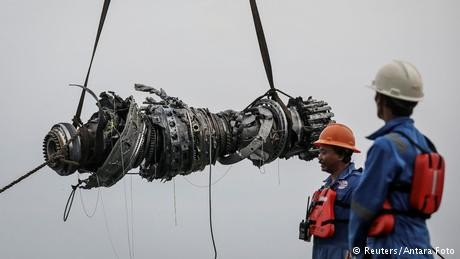 Data from the plane's flight data recorder, also known as a "black box," showed that the plane experienced issues on several flights prior to the crash, the head of Indonesia's National Transportation Safety Committee (KNKT), told reporters.

In order to dispel rumors, "we want to clarify that in the black box there were four flights that experienced problems with the airspeed indicator," agency head Soerjanto Tjahjono said.

The agency did not speculate on the role that the airspeed indicator problem played in the crash, saying they were working to determine what caused the problem and whether proper repairs were done.

Aviation experts also cautioned that it was too early to tell the exact cause of the crash and that the flight recorder still needs to be fully analyzed.

Hit the water at 'high speed'

Search teams are still trying to locate the missing cockpit recorder to determine why the nearly brand-new Boeing 737 MAX 8 crashed. Divers located the plane's fuselage on Saturday, with one volunteer dying while working to recover human remains.

"The plane was intact when it plunged to the sea, it did not explode in the air, and the aircraft engine was running when it touched the water at high RPM — it's marked by the loss of all blades of the turbine," KNKT agency head Tjahjono said.

Following the crash, reports emerged about problems with the plane's previous flight. Budget airline Lion Air confirmed that there had been issues, but said they'd been fixed.

Relatives of the victims confronted Lion Air co-founder Rusdi Kirana at a meeting organized by officials on Monday.

"Lion Air said the problem was fixed, is it true the problem was cleared?" asked Bambang Sukandar, who said his son was on the flight. "If not, technicians in charge must be responsible," he said.

Lion Air is one of the youngest airlines in Indonesia but has rapidly grown, expanding its flights in Southeast Asia. The budget airline has frequently received complaints over safety issues, poor service and unreliable scheduling.

Last Monday's crash is the worst airline disaster to happen in Indonesia since 1997 when 234 people died on a Garuda flight. It has also raised questions about airline safety in Indonesia, whose airlines were banned from European and US airspace until recently.