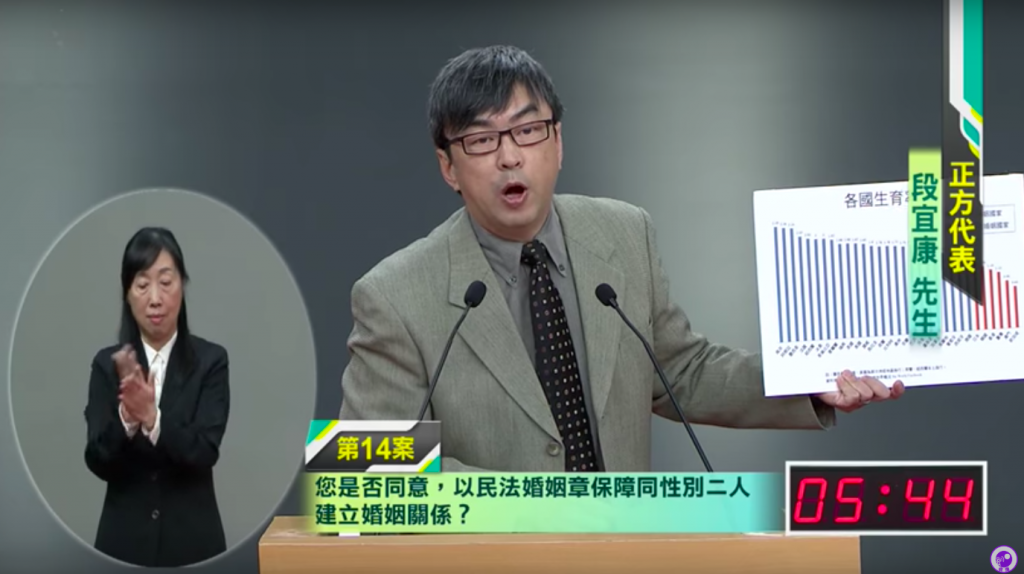 TAIPEI (Taiwan News) — Over the past few days, Formosa Television has live-streamed debates on each of the 10 public referendums set to take place on Nov 24.

In the first round of speaking, Tuan pleaded with the public to put themselves in the shoes of their LGBT compatriots and said that love between two consenting adults should receive equal protection under the law.

Opponents of equal marriage often say that democratic law should respect the rights and wishes of the majority rather than conferring minorities preferential treatment. Tuan contested, “if simply belonging to a minority makes one’s desires abnormal, does that mean aboriginals and new immigrants should be considered abnormal, too?”

The legislator additionally refuted concerns that legalizing same-sex marriage would further exacerbate Taiwan’s low birthrate and aging population issues. Pulling out a bar chart to demonstrate, Tuan pointed out that the 20-or-so countries that have legalized same-sex marriage still have higher birthrates than Taiwan, Hong Kong, Macao, Korea and Singapore.

He added that there is no scientific evidence to support claims about same-sex marriage lowering birthrates. In fact, the legislator noted, birthrates in France and Belgium have increased by 30 percent since 2000—which is around the time both countries enacted civil partnership laws conferring equal rights to same-sex couples. The professor added that the language of the law is deeply embedded with humanistic and cultural meaning and there is no need to change it. Permitting alterations to the law—expanding the psychological and physiological boundaries of gender—would cause deep upset, he claimed.

In the second round of speaking, legislator Tuan said that the worst thing about the equal marriage opposition is that they are willing to allow same-sex couples some legal rights as long as they are not completely “like them.” Tuan asked, “If this is not discrimination, then what is?” He compared it to the U.S. “separate but equal” Jim Crow laws of the early 20th Century.

The legislator concluded his speech by reiterating the importance of safeguarding the rights of everyone equally, and said that as long as there is love in one’s heart, it should enjoy the protection of the law. Professor Tseng said everyone should be protected by the law regardless of color or creed, but devising a new way to recognize same-sex relationships would have less of a negative impact on society.

Commentators on the live-stream video have largely praised Tuan Yi-kang for his concise, well-supported argument and heartfelt delivery, while criticizing Tseng for putting forward a rather confused case—with some claiming they had no idea what he was talking about. Many have expressed Tseng’s motives were clear, yet he had no evidence to back up his claims.

Referendum 14 on legalizing same-sex marriage opens for public vote on Nov. 24 alongside nine other referendums, including four more that relate to marriage rights and diversified gender education. Equal Love Taiwan continues to stress the importance that every citizen goes out to vote to guarantee equality triumphs. 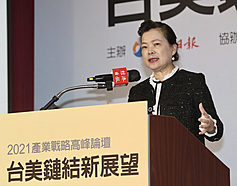 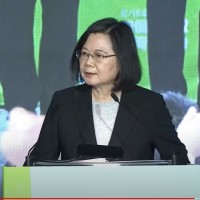