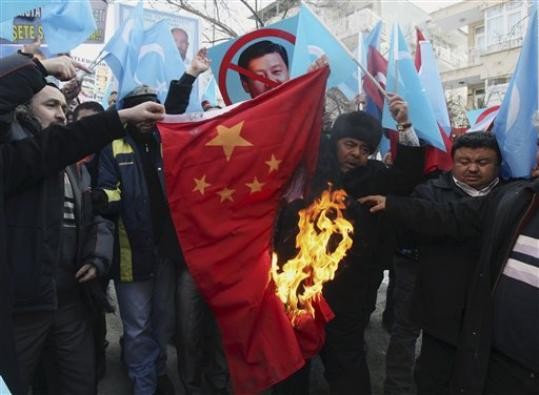 CANBERRA (East Asia Forum) -- Since ethnic riots broke out in Urumqi in 2009, the Chinese Communist Party (CCP) has steadily turned Xinjiang into a provincial police state. Uyghurs, Kazakhs and other Muslim minorities are being closely surveilled and detained by security forces.

The CCP states its targets are the "three evil forces" of ethnic separatism, religious extremism, and violent terrorism. Terror attacks by Uyghurs in China have blurred the boundaries between the three forces and triggered an expansion of policies targeting the sources of potential opposition to Party rule — among them are minority ethno-religious identities.

Last year, in an effort to contain "religious fervour," Uyghurs were banned from giving their newborns Islamic names. Other Uyghurs have been forced to de-don head scarves and shave beards. Defenders of Beijing’s policies argue that extreme measures are needed to curb radicalization and prevent terror attacks.

Critics charge that the policies are crude and will fuel resentment and drive more Uyghurs to extremism.

Affronts to constitutionally safeguarded minority rights and international human rights laws were only the beginning of what is now clearly a sweeping assimilationist program targeting China’s Muslim population.

Over the past months, it appears that hundreds of thousands of Uyghurs have been arbitrarily detained in re-education camps where they are coaxed and coerced to reject religious and cultural practices and to pledge their allegiance to the Party and the People’s Republic of China (PRC). Not since the Cultural Revolution has re-education and internment been conducted on such a massive scale.

How are we to interpret the roll out of such a draconian assimilationist initiative when the region was already in the tight grip of the state? The answer lies in a confluence of factors. Although the Chinese Dream identifies hard targets, it is rooted in official narratives of Chinese history that emphasize territorial integrity and the achievements of Chinese culture. It is a unitary vision of the nation driven, in part, by frustration at the apparent lack of unity in parts of the country.

Perhaps inevitably, the Chinese Dream is Han-centric — a "with us or against us" version of nationhood. This is reflected in the content of re-education, which squarely focuses on stronger identification with Chinese nationhood and Han culture and the rejection of "local nationalisms" — seen as an obstacle to CCP efforts to return China to national strength.

A centerpiece of Xi’s grand strategy is the Belt and Road Initiative (BRI), part of which aims to strengthen linkages between China and Central Asia. Violence in Xinjiang, or the fear of it, threatens the BRI in tangible ways.

Xi’s vision of a unified China is also undermined by Muslim minorities ’identification with other Turkic groups in Central Asia, which exposes the multicultural edges of the nation-state.

He has a keen ally in the Xinjiang Party Secretary Chen Quanguo. Chen was the party secretary of the Tibet Autonomous Region where he used internment camps as part of a repertoire of measures designed to subdue ethnic Tibetan political mobilization — measures that Chen has expanded and intensified in Xinjiang. Like top party officials before him, his achievements in the restive ethnic minority regions is helping to propel his career. Indeed, Chen was elevated to the Politburo in 2017.

The tight grip of the security apparatus in Xinjiang has made it possible for Chen to expand his coercive measures. Extensive surveillance and a strong physical presence of security forces mean the state can deal with any blowback from the local populace.

And as domestic security operations are now overseen by the high-profile National Security Commission that Xi established, the Commission’s success will be judged on its ability to prevent unrest in Xinjiang. With Xi personally leading the Commission, failure is not an option.

Xi and Chen do not, of course, operate in a policy vacuum. Universities and policy research centers in Xinjiang and Beijing have been consistently hawkish in their proposals for dealing with unrest in the region.

Their classified submissions to local and provincial Party and government agencies are often the source of ideas for coercive programs such as the ban on religious names for newborns. It is likely given what we know about the channels of policy communication on ethnic policy that the expansion of internment was recommended or at least supported by scholarly advice.

Official narratives present Xinjiang as a hotbed of terrorism and Uyghurs and other Muslim minorities as ungrateful beneficiaries of state largesse. Even though the wider public knows little about the camps, state media’s relentless criticism of "splittism" and "terrorism" appears to have rallied strong public support for doing what it takes to crush the "three evil forces."

China’s clout in international affairs has also meant that the international response has been relatively muted. Even though the Trump administration has flagged sanctions for human rights abuses, these seem inconsequential in the context of the unfolding trade war.

The alignment of the Party leadership’s strategic goals with institutional capacity, expert advice, public opinion and the personal ambitions of key officials suggest that coercive measures will be a prominent feature of ethnic policy under Xi.

His dream of a unified and rejuvenated China will be realized by assimilation rather than accommodation. And where assimilation cannot be achieved peacefully, it will be coerced. A Uyghur child below a sign that reads "Love the Party, Love the Country" (Associated Press Image)

Ben Hillman is an associate professor at the Crawford School of Public Policy, The Australian National University. This article was originally published on East Asia Forum on Oct. 24, 2018.