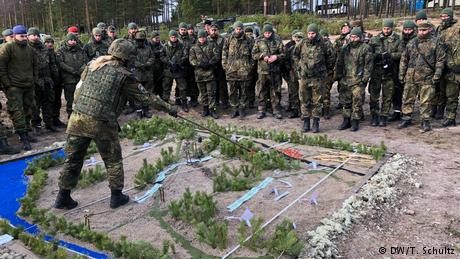 So why should 50,000 troops be trudging across the Norwegian tundra testing old-school tanks and blowing up bridges?

It's all about the potential for hybrid surprises — from a traditional border incursion to a hijack of the highest-tech remotely-operated weapons system.

While there's only one nation that can muster all these tactics near NATO territory, the alliance insists Trident Juncture is not about Russia. Secretary General Jens Stoltenberg declared NATO's defense arsenal must span the "full spectrum, from conventional weapons all the way up to nuclear weapons." Ulrike Franke, a security and defense analyst with the European Council on Foreign Relations agreed that NATO's menu of battle options needs to include "all of the above."

Franke, who specializes in drone warfare, warns that most NATO countries are not sufficiently prepared if the "next war" is indeed waged by cyber and other new technologies. But at the same time, she emphasized to DW, "I would also criticize NATO if now they would abandon all kind of conventional arms or conventional warfare and just focus on cyber or on autonomous weapons. That's unfortunately the reality of today: We need to do everything."

Visiting the exercises, German Defense Minister Ursula von der Leyen cited NATO's challenges as running the gamut from the crisis in Ukraine to the stabilization of Africa.

French Lieutenant Colonel Herve Jure is stationed with NATO's Allied Command Transformation headquarters in Norfolk, Virginia, the arm of the alliance tasked with advancing its technological capabilities. Speaking to DW at a demonstration of future warfighting techniques in Norway, Jure said the advantages of moving to more automation and remote operation include being able to reduce the number of people put in harm's way, especially for simple logistical tasks, a lesson he said NATO learned in Afghanistan.

Read more: The strengths and weaknesses of Russia's military

One example is using drones to deliver spare parts to troops stationed in difficult terrain. US Marine Sergeant Samuel Margarini said that out in the field, getting replacement for parts that break "in some cases take hundreds of days, even 300 days" if they are still in production at all. That time can be reduced to mere hours, Margarini said, using 3-D printers that could soon be a standard part of military equipment.

But on the other hand, Jure noted, relying too much on technology carries its own dangers. "All those capabilities have to be reversible," he explained, and forces need to know how to fill in quickly, because the "systems can be jammed or destroyed or taken by someone else."

Bundeswehr goes back to basics

On the base in Rena that German troops share with Belgian, Dutch, French and Latvian counterparts, Lieutenant Colonel Helge Lammerschmidt was overseeing amphibious capability training — getting tanks and other equipment across waterways — using techniques he acknowledged date from the Cold War but are still effective.

Lammerschmidt is candid about the Russia factor. "As a result of the Ukraine crisis [in 2014] we saw that it is more important to change back from stability operations to high-intensive warfare operations," he told DW, noting renewed ambition to "move larger formations and heavy equipment, and this has not been trained and done within the last 10 years."

The back-to-basics training even had German troops practicing how to use explosives to get rid of barbed wire, which can completely disable a tank, and to fell trees in an enemy's path. Simple, but effective — and unhackable.

All these efforts are highly appreciated in Norway, which shares about 200 kilometers (120 miles) of land border with Russia as well as a maritime "delimitation" line extended across the Barents Sea and Arctic Ocean. Norwegian Army Colonel Eystein Kvarving said Norway had long thought NATO needed to refocus on territorial defense, and it was more than happy to provide that training ground.

"It feels reassuring," Kvarving said. "It's very nice to see that it actually works." He noted that in recent years the US has prepositioned equipment in Norway and added a contingent of Marines. "I think that's a sign of an alliance that's there for you, should you need it," he added. "And then let's hope we never have to do that in real life."