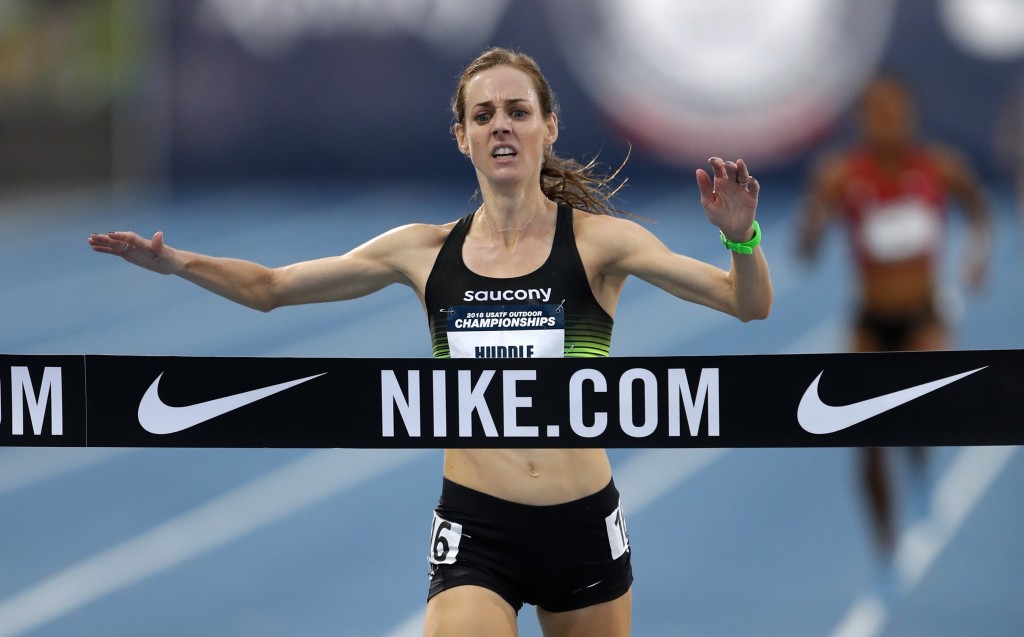 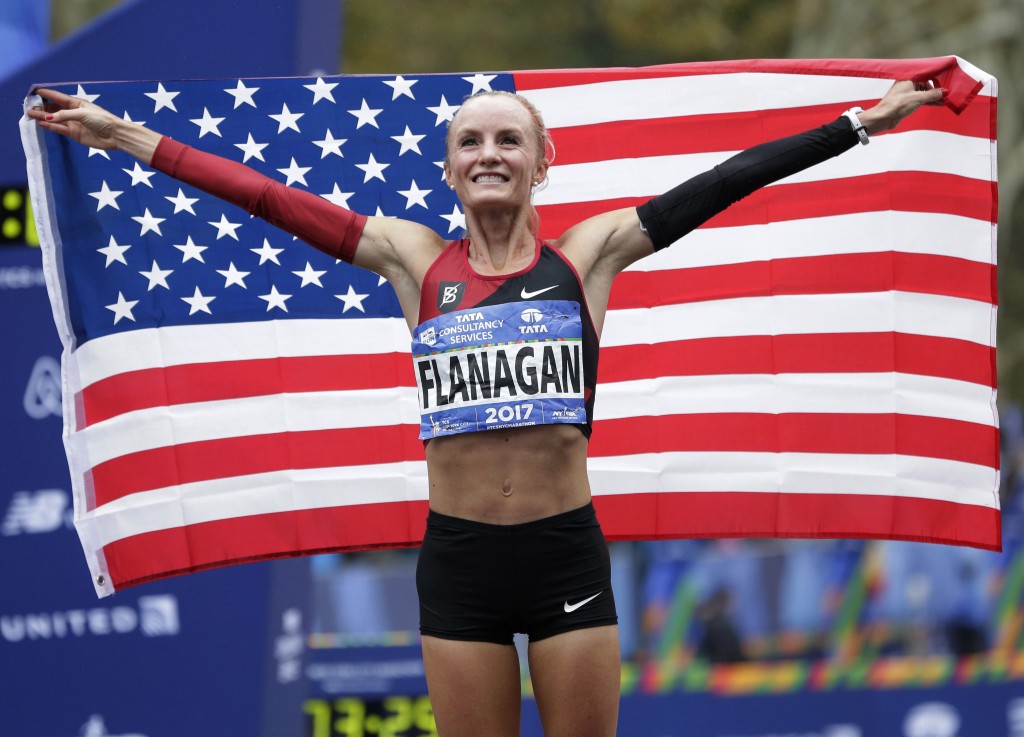 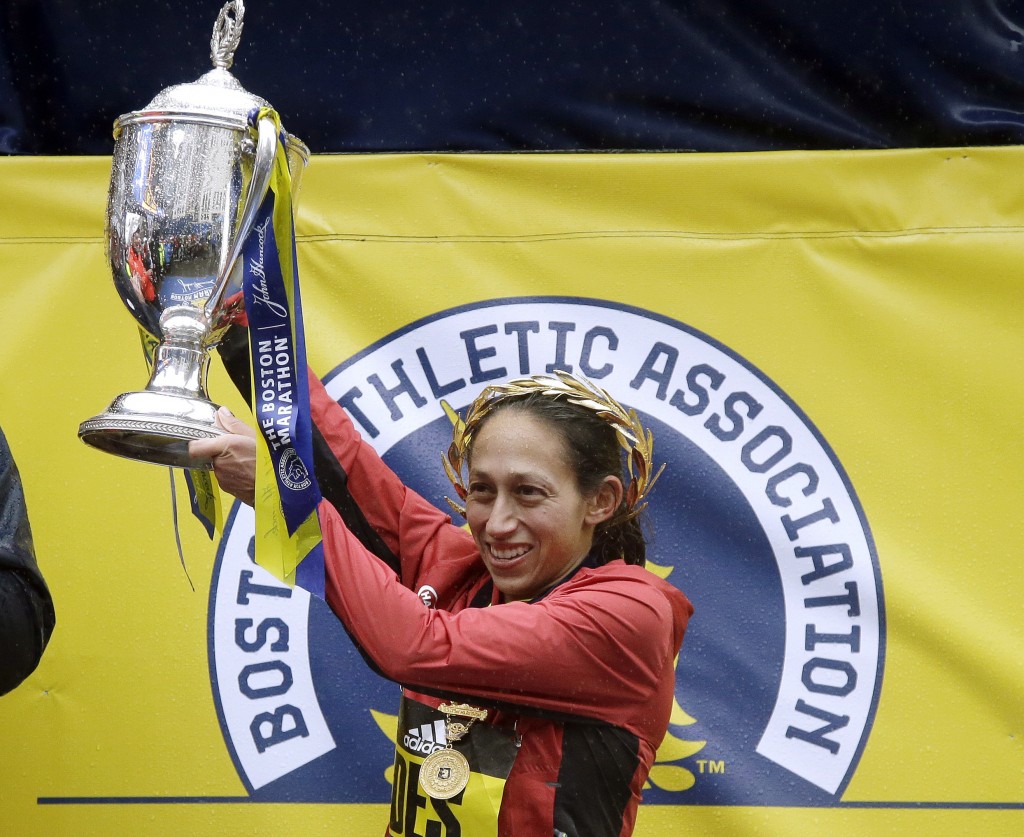 Desiree Linden followed with a victory in April at the windy and rainy Boston Marathon, the first American woman to accomplish that feat in 33 years.

Those achievements motivate Molly Huddle, who finished third at the 2016 NYC Marathon in her debut at 26.2 miles after a successful middle-distance career.

"We have a very talented group of women knocking on the door," Huddle said.

The 34-year-old from upstate New York is among that group. At the 2016 Rio Olympics, Huddle broke Flanagan's 10,000-meter American record from the 2008 Beijing Games.

In January, Huddle broke Deena Kastor's 2006 American record at the Houston Half Marathon. Kastor, who won bronze in the marathon at the 2004 Athens Olympics, watched Huddle surpass her record in Texas.

"Some of the other American women already have the accolades under their belt," Kastor said. "Molly is coming in a little more hungry. So I think we'll see something special out of her on Sunday."

Huddle recently trained for two months in Arizona in the high altitude of Flagstaff and Scottsdale. She earned state championship titles in cross country at Notre Dame High School in Elmira, New York, (which didn't have a girls' track team) and set a school record in the 5,000 at the University of Notre Dame.

She lives and trains in Providence, Rhode Island, where her longtime coach Ray Treacy is the track coach at Providence College. She's married to Kurt Benninger, who also ran middle distance at Notre Dame and is part of her support team.

The 5-foot-4 Huddle called it a "confidence boost" to finish on the podium in her first marathon. While pleased with her NYC Marathon result, she didn't expect "so many solo miles" when dropping behind the pack during the five-borough race.

"It's the ultimate challenge in the running world," Huddle said of the event, noting the uphill portion of the Queensboro Bridge at Mile 15 as the hardest part of the route.

She got a stitch in her side on First Avenue, where crowds are often the largest and loudest. But the best part came during the Central Park finish where "a lot of people are yelling your name."

She calls the marathon a "mature athletic event" that's based on endurance and strength.

"You can't be impetuous in a marathon," Huddle said. "Everything is going great, great, great and then with 4 miles to go, you're on your back. You need to read your body really well. You hope one day your potential is No. 1."

She hit the wall during the Boston Marathon, where she finished 16th and struggled with an infected tooth and hypothermia in 30-degree temperatures, whipping wind and a downpour.

"Weather a big part of the marathon, it magnifies everything," she said. Temperatures are forecast in the 50s on Sunday.

Defending champion Flanagan and Linden will be in the field, along with Kenyans Mary Keitany and Vivian Cheruiyot. Last year, Flanagan brought it home to a cheering crowd against a fading Keitany.

"She really captivated everybody watching, the 2 million people on the streets, those of us glued to our televisions or here at the finish line to welcome her at Central Park," Kastor said. "It was an extraordinary performance."

Kastor will be rooting for Huddle, who looked to her as a role model during her college days. Huddle aims to make the U.S. team for the 2020 Tokyo Olympics.

"Molly has such a great range and she's pushing it into the marathon," said Kastor, who received the Abebe Bikila Award for outstanding contribution to the sport Thursday. "She could really make the team in whatever event she chooses — 5K, 10K and marathon."

Huddle says the surge of American women in the marathon has its roots in watching Kastor, Flanagan and others perform at nationals and on the Olympic stage. She says "once you see it is possible" it helps "shift your subconscious."

"It's raised the bar," Huddle said. "It's more encouraging than anything."