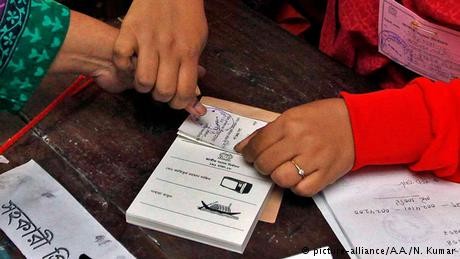 Doubts abound about the ability of Bangladesh's election commission to hold a free and fair general election, expected to be held at the end of December. Skepticism has grown further after a court recently doubled the jail term for imprisoned opposition leader Khaleda Zia from five to 10 years for what her supporters say are trumped-up corruption charges.

The decision came a day after Zia, arch-rival of current Prime Minister Sheikh Hasina, was handed a separate seven-year term for other graft charges. The rulings have thrown the already beleaguered main opposition party into a state of total disarray.

Bangladesh's ruling Awami League, meanwhile, is looking to cement its power by securing another victory in the upcoming elections. But critics have called PM Hasina's rule increasingly authoritarian. They point to the recently passed digital security law, widely criticized by media outlets and rights groups for its potential to be misused by the authorities to curb dissent and free speech.

The government says it has been enacted to protect the country from misinformation and propaganda.

Critics of Hasina's administration, including a prominent photojournalist and lawyers and journalists, have been detained since major anti-government protests in August brought hundreds of thousands to the streets.

While the Awami League had previously rejected to hold any talks with opposition parties on the looming election, it has now relented and agreed to talks with an opposition alliance that includes the BNP. The talks are set to be held on Thursday.

Despite the fragile democratic situation in the poverty-stricken South Asian

country, the European Union said it has decided not to send an election observer team to Bangladesh to monitor the upcoming polls.

In a DW interview, EU Ambassador to Bangladesh Rensje Teerink spoke about the reasons for not sending the observer team as well as the current state of affairs in the country.

DW: How do you view the current relationship between Bangladesh and the European Union?

Rensje Teerink: The relationship between the two sides is very good and longstanding. It was previously characterized by development cooperation, but now trade also plays a more prominent role. The EU is the biggest destination for Bangladesh's garment sector.

Politically, too, we share a good and cordial relationship. We work together on a wide range of areas, including human rights, good governance, development programs, public finance management and education. I think there's always scope to do more, but we have come a long way after all these years.

The new digital security law in Bangladesh has been criticized by rights groups for its potential to muzzle free speech and silence critics. What's your take on this law?

We have been listening to all voices here in Bangladesh, including the media, civil society groups, academics and intellectuals, who were voicing their concerns about the law. We raised the issues with the Bangladeshi law minister and other high-ranking officials. We even had a meeting on the issue chaired by the foreign minister.

Read more: Bangladesh: Beware of what you say on talk shows

During these meetings, we were updated on the law and told that it's still open for changes. So it's rather positive if the government is really still open to making changes. Many are looking at Bangladesh to see how they deal with this situation. We're also closely following the developments here, particularly at a time when multilateralism is coming under increasing attack.

Free speech and free press are universal values that the EU always strives to uphold. That's why we're monitoring how countries worldwide, not only Bangladesh, are upholding the freedom of expression.

Opposition parties and civil society groups accuse the Bangladeshi government of committing gross human rights violations and curtailing political space for opposition voices. How do you view these allegations?

It's really difficult for me as a spectator to go into political discourses here. Every side has its own story. I tend to try and see what's actually going on in the country. I think it's quite positive that the opposition and the ruling party are now going to meet on November 1 to hold talks on the elections. We welcome this development.

I am a relative newcomer to Bangladesh; I have been here for just a year. I have always been told that when Bangladesh gears up for elections, there will be political turmoil and mass demonstrations on the streets. But so far, I must say, it has been quite calm.

We remain hopeful and we welcome these elections. It's good that the opposition is participating in the elections this time round. And we're confident and hopeful that it will be a genuine, credible, transparent and inclusive election.

But the EU is not sending its observer team to monitor the elections in Bangladesh. Why?

No, we're not sending an observer team. That's because sending a credible observer mission is a very big operation. It requires a big number of observers and months of preparation. So, in budgetary terms, it's quite expensive. And it takes a lot of effort and preparation.

We have therefore decided not to send a team this time round. That doesn't mean that we're not going to follow these elections. We will definitely be paying close attention to the developments in the country.

Furthermore, Bangladesh has good local observers, who probably are going to do an excellent job monitoring the elections.

Read more: Why Bangladesh student protests are not just about road safety

What criteria, other than money, does the EU take into consideration while deciding to send election observers?

It's a question of prioritizing, and I cannot go into all the details because there are so many elections taking place around the world.

So we have to make very informed decisions on whether or not to send observer missions.

One of the most important criteria is the time span available to us to carry out the mission. Then, there are security constraints in certain places. So there are multiple criteria we consider before taking the decision.

How do you see Bangladeshi politics and democracy evolving in the coming months and years?

I don't have a crystal ball and I am not going to make any predictions. What we look forward to is political stability in Bangladesh. We also hope the country maintains its current economic growth trajectory.

The country has performed exceedingly well when it comes to achieving the Millennium Development Goals. Its economic expansion over the past decade has been impressive. So we would like to see the country develop into a stable and prosperous place for all Bangladeshis.

The interview was conducted by Harun Ur Rashid Swapan. It has been edited for clarity.