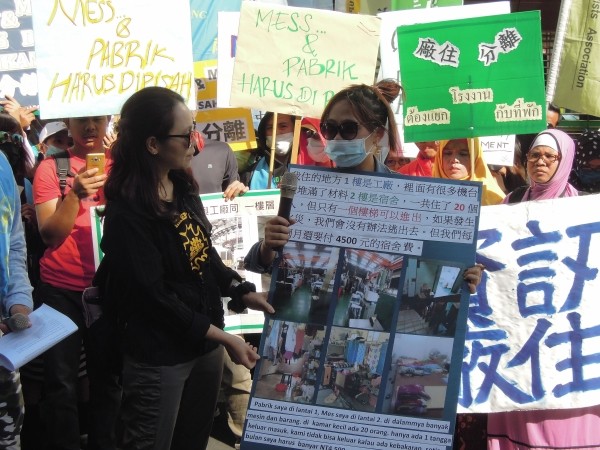 TAIPEI (Taiwan News) -- To mark the six-month anniversary of a deadly factory fire that claimed the lives of seven people, protestors gathered in front of the Ministry of Labor (MOL) today to criticize the ministry for failing to deliver on its pledge to ban onsite factory dormitories.

In April, five firefighters and two migrant workers were killed in their dormitory by a fire at a printed circuit board factory owned by Chin Poon Industrial Co (敬鵬工業) in Taoyuan City's Pinzhen District. Today, the Taiwan International Worker's Association (台灣移工聯盟) organized a protest rally and press conference to urge the MOL to implement a ban on onsite factory dormitories as soon as possible.

At the event, the organization presented four cases of actual onsite factory dorms and invited foreign workers who actually lived in the facilities to appear in person. At the press conference, photographs were presented of such living quarters.

Although the dorms photographed were in different factories, they all had the same characteristics, including narrow stairs, spaces filled with clutter, and living areas located inside factories or on the floor above. A migrant worker who is employed at a textile mill appeared to say that his dormitory was inside the factory, but there were no emergency exits and that he feared for his safety in the event of a fire, reported CNA.

The migrant worker also said that because the factory is not separated from the dormitory, the machines on the factory floor are running 24 hours a day and even if someone wanted to have a good rest, it would be impossible due to the noise, according to the report. The worker expressed his hope that the MOL could quickly pass a law requiring dormitories to be separated from factories.

Hsu Wei-dong (許惟棟), a member of the Hope Workers' Center in Hsinchu, said that these cases were only the tip of the iceberg. Hsu said that out of 1,022 questionnaires his organization sent to foreign workers, 182 respondents reported living in onsite factory dorms, meaning about 1/5 to 1/6 of factory workers live in housing that is vulnerable to factory fires, reported CNA.

In December of last year, six Vietnamese workers lost their lives in a fire in their illegal dormitory at a plastics factory in Taoyuan. In the aftermath of the deaths, in May and June of this year, there were large protests held by foreign workers over housing and safety issues, including the separation of worker dormitories from factories.

Last week, the MOL announced that it planned on holding inter-ministerial meetings on amending the labor law to make onsite factory dormitories illegal and penalize employers for the deaths or injuries of foreign employees by lowering their worker quota. On Oct. 25, Hsueh Chien-chung (薛鑑忠), a section chief in the MOL's Workforce Development Agency, said that current Ministry of Economic Affairs (MOEA) regulations allow for the existence of dormitories in the factory areas. Therefore, in order to make this practice illegal, the MOL will need to hold inter-ministerial discussions with the MOEA.

According to government statistics, as of September, the number of foreign migrant workers has reached 699,379.