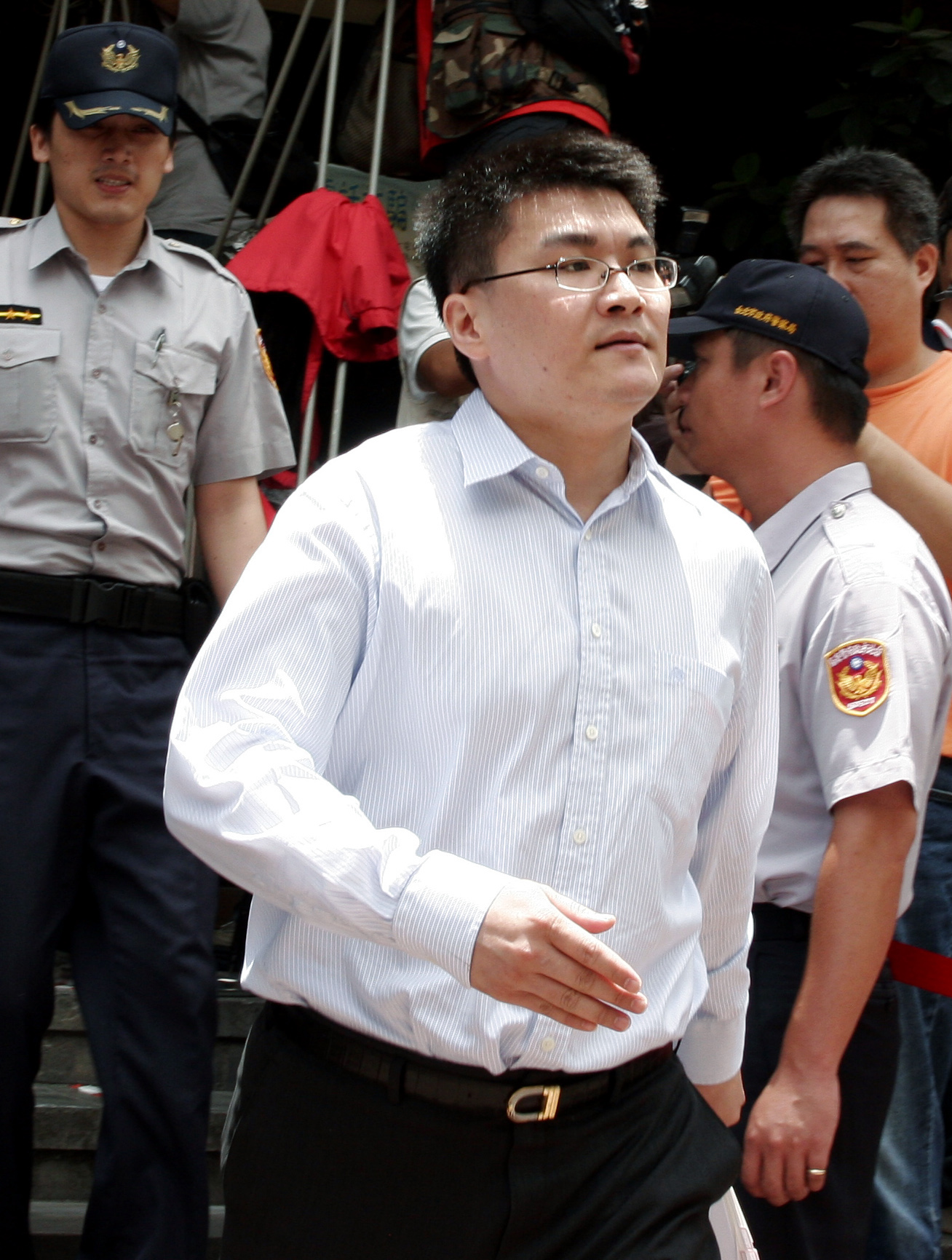 President Chen Shui-bian's (陳水扁) son-in-law Chao Chien-ming (趙建銘) was sentenced to six years in prison and fined NT$30 million after being found guilty of insider trading charges.
After a five-month investigation into the Chao and his father's alleged insider trading of Taiwan Development Corporation shares, the Taipei District Court announced its verdict at 3 p.m. yesterday in the high-profile case.
According to the verdict, the judges ruled that the TDC case was a typical crime committed by influential people and because neither the father nor the son showed remorse for their actions, they deserved to be given stiff penalties.
"Chao Chien-ming, a doctor as well as one of the first family members, and his father Chao Yu-chu, a retired principal, even made use of their influence to obtain confidential information that had a positive effect on the prices of TDC shares. They obtained huge profits through the buying and selling of TDC shares," the verdict read, which put the total profits earned by the two at over NT$58 million.
"A panel of three judges convicted Chao Chien-ming and his father of making illegal gains through insider trading and decided not only to send them to prison but also to fine them NT$30 million respectively," court spokesman Liu Sau-song said at a press conference.
Liu further noted that Chao Yu-chu was sentenced to eight years and four months in prison for not only insider trading of TDC shares but also for embezzling NT$4.5 million from a total of NT$11 million in donations made by Eslite Chairman Robert Wu and other people to the table tennis association he headed.
According to the verdict, the elder Chou put the NT$11 million in donations in his personal account and then loaned NT$4.5 million of it to a friend and to make investments in the stock market.
In addition to Chao Chien-ming and his father, former TDC Chairman Su Teh-jien, real estate developer Yu Shih-yi and Waterland Securities Co. board director Tsai Chin-wen were all given jail sentences for their involvement in the insider trading case.
Su was sentenced to four years and three months in jail for leaking confidential information to the president's son-in-law, Yu and Tsai. Su told them of the approval of a syndicated loan from a banking consortium that would save Taiwan Development from potential bankruptcy and also that Chang Hwa Commercial Bank was willing to release its shares in the developer.
The verdict noted that through Su, Chao Chien-ming, his father, Yu and Tsai all bought a large number of TDC shares released by Chang Hwa Commercial Bank. Except for Tsai, they also bought thousands of additional shares of TDC stock on the market.
When the syndicated loan to TDC was made public, the company's share price soared to the benefit of the four individuals convicted yesterday.
Judges believed that the way in which the accused obtained the shares released by Chang Hua Bank was illegal.
The verdict pointed out that the illegal profits that the father and son made on transactions of the TDC shares released by the bank was only NT$4.27 million, but it found that they also profited to the tune of NT$54 million from the trading of 5 million shares bought in the name of Chao Chien-ming's mother.
For Yu, in addition to illegal gains of NT$4.27 million, the gains he made from the trading of TDC shares bought separately amounted to more than NT$66 million. As a result, Yu was sentenced to four years in jail and fined NT$60 million.
Court spokesman Liu added that in addition to the fines judges imposed on the senior Chao, the junior Chao and Yu, illegal profits the three obtained will be confiscated.
Because Tsai confessed that he took part in the insider trading case and donated all of the illegal profits he obtained to the Securities and Futures Investors Protection Center, he was given a two-year jail sentence with a suspension of four years.
Meanwhile, in another case derived from the TDC case, two top managers of Nice Group's subsidiaries Chen Jing-yao and Huang Min-sen were respectively sentenced to two and one and a half years in prison for breach of trust, district court spokesman Liu noted.
According to the verdict, Chen was convicted of harming the interests of the company he manages by misusing the companies' money to provide loans of NT$40.8 million to the senior Chao through Huang.
In addition to transferring the NT$40.8 million from Chen to the senior Chao, Huang gave the senior Chao NT$7 million that he took from the company he manages.
All of those convicted have the right to appeal the verdict.