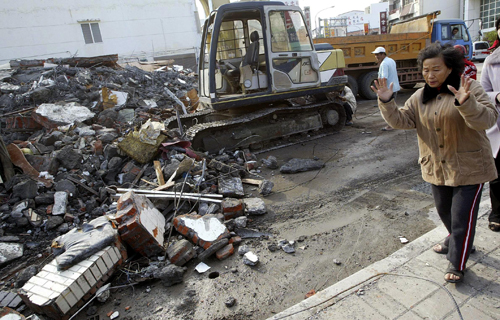 A strong earthquake in Taiwan has damaged several undersea cables in the region, jamming up the Internet and telecoms systems across much of East Asia, regional operators reported yesterday.
The disruption was widespread, hitting services in Japan, Taiwan, South Korea, Singapore and Hong Kong, with knock-on effects elsewhere, they said.
The most significant infrastructural damage was to the two undersea cable lines. It cut off 50 percent to 60 percent of Chunghwa's overall telephone capacity, the company said, severely affecting connections to China, Japan and Southeast Asia.
Service to the United States - where 60 percent of capacity was lost - was also hard hit.
Chunghwa Telecom said yesterday that it will take two to three weeks to repair its undersea cables damaged in the magnitude 6.7 earthquake
The damage to the cables caused by earthquake - which struck at 8:26 p.m. Tuesday, with the epicenter located 22.8 kilometers southwest of Hengchun, Pingtung at a depth of 21.9 kilometers underground - has severely affected data traffic between Taiwan and Hong Kong and Southeast Asia, with data capacity reduced to a mere 2 percent, Lin Jen-hung, a Chunghwa Telecom manager, said at a news conference held in Taipei yesterday.
Vocal data traffic capacity to the United States has been reduced to 40 percent, that to Japan reduced to 11 percent and that to China reduced to 10 percent, Lin said.
Digital data traffic capacity has been reduced by about 30 percent, with Internet users in China, Hong Kong and Singapore experiencing congestion in the wake of the earthquake, Lin said.
It was unclear when the Internet service would be back to normal, the company added.
Taiwan's undersea communications cable system consists of seven lines, extending from northern and southern points on the island. When the earthquake damaged the two southern lines, the northern lines were also affected, because the cables are interconnected.
Chunghwa said the damaged portion of the cables will be pulled to the surface and repaired aboard a ship.
With the work expected to take as long as three weeks, there were fears of further communications difficulties on Taiwan, Asia's fifth largest economy, and additional telephone and Internet glitches in neighboring countries including Japan, China, and South Korea.