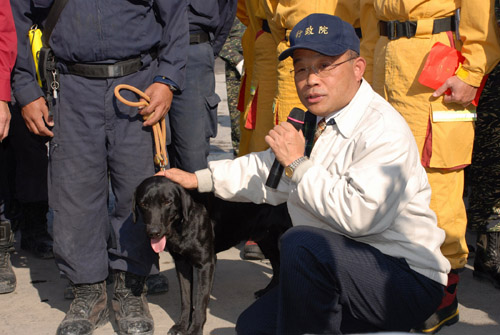 Maintenance crews began clearing the rubble in the southern country of Pingtung yesterday, hours after a powerful earthquake struck the area, killing two people and injuring 47. The quake, which hit late Tuesday just offshore of the Pingtung County township of Hengchun, occurred on the second anniversary of the devastating tsunami that took more than 200,000 lives in southern Asia. Government officials came forward yesterday with offers of assistance and to express condolences to the affected families in the Hengchun area. Military personnel and firemen were working around the clock to rescue people who were trapped and injured, and maintenance crews began clearing the rubble in the area. Two members of a Hengchun family were killed when their four-story house collapsed. Six other members of the family were rescued from beneath the rubble in the early hours of the morning yesterday. Local cable news stations reported that one woman, Fang Shu-chuan, held her 7-year-old twins and shielded them with her body as the building collapsed. Fang died from injuries sustained but her two sons survived. One of them suffered minor injuries and the other, more seriously injured, was rushed to the hospital. His right leg, damaged beyond repair, was subsequently amputated. "My son is conscious after the operation," the child's father said tearfully. "He said to me, 'I want my leg.'" "It was all too late when I rushed back to the house," the father said. Fang's brother was also killed when the building collapsed. Hengchun residents and tourists in the Hengchun area spent most of Tuesday night out on the streets. "The building swayed so badly that a lot of guests panicked and ran out of their rooms and into the streets," said Liao Ching-ling, a hotel manager. But another hotel manager Chang Chi-Kuang said the quake did not affect business in Kenting as there was no cancellation of hotel bookings and visitors were looking forward the upcoming New Year holiday. A total of 134 elementary and high schools in five southern cities and counties sustained damage in the quake, including nine that were heavily damaged in Pingtung and one damaged in Kaohsiung City. No serious damage was reported in the Southern Taiwan Science Park. Premier Su Tseng-chang (蘇貞昌) and Minister of the Interior Lee Yi-yang (李逸洋) yesterday visited the affected areas and hospitals to offer condolences to the relatives of those killed in the quake and to those who were injured. "The damage was reduced to a minimum because of the efforts of rescue crews and the emergency relief system that was established after the September 21, 1999 earthquake," Su said. Meanwhile, Lee disclosed that the relatives of those who died in the quake will be given compassionate compensation of NT$800,000 for each death, those seriously injured will receive NT$150,000, while those whose homes have been damaged will be given subsidies ranging from NT$30,000 to NT$150,000 after the city government has evaluated the damage. Democratic Progressive Party Chairman Yu Shyi-kun (游錫<方方土>) said yesterday that the DPP headquarters staff will donate one day's salary to help the affected families. Yu also called on the general public to donate to the relief effort. The Financial Supervisory Commission is urging members of the public to buy earthquake insurance to cover their possessions.