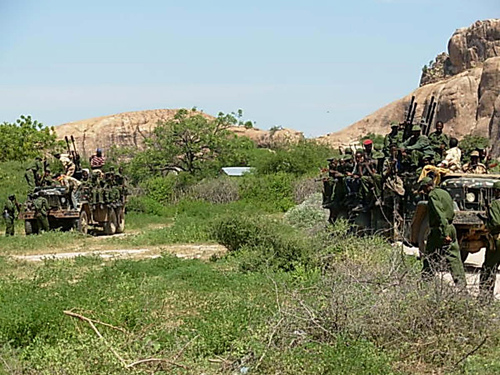 Ethiopian and Somali government troops attacked at dawn yesterday and drove Islamic movement fighters out of the last major town on the road to the capital.
A former warlord who ruled the town, Jowhar, before it was captured by the Council of Islamic Courts in June led the Somali government troops as they drove into the city, residents said.
"Ethiopian troops and Mohammed Dheere have entered the city," said Abshir Ali Gabre. Dheere, who was wearing a white "I Love Jowhar" T-shirt, shook hands with residents and handed out dozens of the shirts to cheering residents. Radio Jowhar, an independent radio station, quickly began broadcasting Western music, which the Islamists had banned.
"We will attack Mogadishu tomorrow, from two directions," Dheere told the crowd, although his statement appeared to overstep his authority. Dheere does not speak for the government or the Ethiopians.
Government spokesman Abdirahman Dinari said his troops were heading toward the small village of Balad, about (30 kilometers) 18 miles away from Mogadishu. A Balad resident, Mohammed Abdi Hassan, told The Associated Press by telephone that the Islamists had left and that no one was in control.
Thousands of Ethiopian and Somali government troops were seen in tanks heading toward Balad, said Nadifo Ali Tifow, a resident in Qalimow, a village 45 kilometers from Balad.
Fighting could still be heard at a military camp south of Jowhar and in the village of Lego. An Islamic movement official said his troops were simply entering a new phase in their battle.
"Our snakes of defense were let loose, now they are ready to bite the enemy everywhere in Somalia," said Sheik Mohamoud Ibrahim Suley. He did not elaborate, but some Islamic leaders have threatened a guerrilla war to include suicide bombings in Addis Ababa.
Ethiopian forces entered the country in large numbers on Saturday, and Ethiopian fighter jets crossed the border Sunday to help Somalia's U.N.-recognized government push back the Islamists. Ethiopian Prime Minister Meles Zenawi said he aims to severely damage the courts' military capabilities and allow both sides to return to peace talks on an even footing. He has said he would not send his troops into Mogadishu, which the Islamic movement has held since June.
The government forces attacked Jowhar yesterday with artillery, mortars and heavy machine guns, and Islamic fighters used irrigation canals as fortifications, witnesses said. The militia, which wants to rule Somalia according to Islamic law, had stopped what their leaders earlier called a tactical retreat to defend Jowhar.
Hundreds of people have been fleeing Jowhar, anticipating major fighting, but others seemed resigned to it.
"We do not know where to escape, we are already suffering from floods, hunger and disease," said Abdale Haji Ali from Jowhar. "We are awaiting death."
Meles said Tuesday he had been given unconfirmed reports that as many as 1,000 people had died and 3,000 were wounded since the fighting began on Saturday.
"Some of them are Somalis, but a very significant proportion of them are not Somalis," Meles told reporters in the Ethiopian capital, Addis Ababa, referring to foreign Islamic radicals who have reportedly joined the fighting.
The International Committee of the Red Cross reported 850 people injured since the fighting began at hospitals supported by the relief agency in Mogadishu and Baidoa, but had no figure for fatalities.
Meles said his forces had completed about half their mission. He said there were 3,000 to 4,000 Ethiopian troops in Somalia - "but no more."
Somalia has not had an effective government since warlords overthrew longtime dictator Mohamed Siad Barre in 1991, pushing the country into anarchy. Two years ago, the United Nations helped set up the interim government.
At the United Nations on Tuesday, the U.N. secretary-general's special representative to Somalia told an emergency meeting of the Security Council that fighting has expanded across a 400-kilometer wide area.
The U.N. Security Council was expected to continue discussing Somalia yesterday.