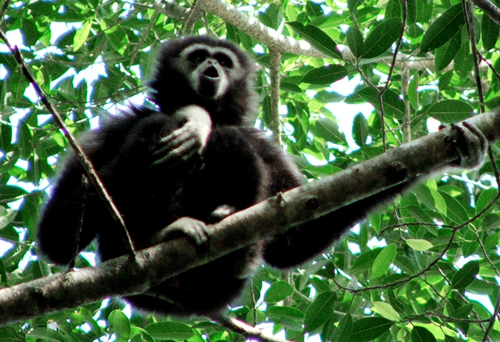 Gibbons living in Thailand have been found to communicate threats from predators by singing - the first time the behavior has been discovered among non-human primates, researchers said yesterday.
While other animals have been shown to use song to attract mates or signal danger, researchers writing in this month's journal PLoS said their study was the first to show gibbons - a slender, tree-dwelling ape - issuing song-like warnings to each other.
"This work is a really good indicator that non-human primates are able to use combinations of calls ... to relay new and, in this case, potentially lifesaving information to one another," said Esther Clarke, a University of St. Andrews graduate student and co-author of the study.
"This type of referential communication's commonplace in human language, but has yet to be widely demonstrated in some of our closest living relatives - the apes," she said.
Clarke along with Klaus Zuberbuhler from St. Andrews in Scotland and Ulrich Reichard of the Max Planck Institute in Germany spent 2004 and 2005 at Khao Yai National Park in Thailand observing groups of white-handed gibbons.
Mostly black with a white face, gibbons live in the treetops and are renowned for their elaborate hooting sounds that echo across the forest for up to 1 kilometer (0.6 mile) to advertise pair bonds or attract mates.
To test the primates response to danger, the team conducted a series of experiments in which they placed models of predators - snow leopards, pythons and crested serpent eagles - near a group and then made audio recordings of their response.
What they found, Clarke said, is that the gibbons approached the potential predator and began uttering a series of sounds - "wa's, wow's and hoo's" sounding similar to a bird - that were picked up by other gibbons, who then repeated the calls to others.
The sounds made when encountering a predator were more chaotic and louder than those used to win over a mate, Clarke said. "Gibbons can rearrange their songs to denote different circumstances, much like we do with words," she said.
Thad Q. Bartlett, a gibbon expert at the University of Texas at San Antonio, said in an e-mail the findings were interesting and significant.
"From a cognitive standpoint, the claim that gibbon calls are digital is interesting because this is one of the hallmarks of human language, that is, the ability to rearrange discrete elements to create new meanings," he said.
Bartlett also said the findings provide further insight into the behavior of gibbons, contradicting earlier studies that suggested their small social network - a male, female and their offspring - were largely a result of them facing few threats.
"Because large group size is often seen as a response to predator pressure, researchers have long assumed that gibbons are largely immune from predators," Bartlett said. "To my mind, this research further demonstrates the importance of predator pressure to the evolution of gibbon social systems."