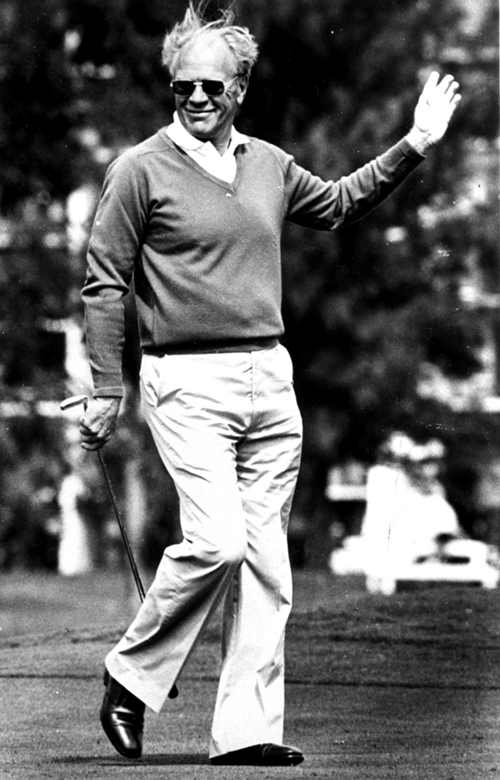 Four days after becoming the 38th president amid Watergate's carnage, Gerald R. Ford was fiddling with the speech he would make to a joint session of Congress in less than two hours.
Suddenly, Ford looked up from his text and his martini.
"Have you had dinner?" he asked Commander Howard Kerr, the naval aide who had delivered the final draft to Ford's modest home in suburban Alexandria, Virginia.
When Kerr said he hadn't eaten, Ford bounded from his easy chair, led the officer into the kitchen and plucked the remains of the new first lady's tuna noodle casserole from the oven.
"Have some dinner," he said. "I'm going to go work on the speech."
That is the Jerry Ford I remember: an ordinary guy in the noblest sense of the word, a steady, solid Michigander whose old-fashioned virtues were the perfect antidote for a fractured country desperate for stability and healing.
"I'm a Ford, not a Lincoln," he liked to say. It was an apt analogy. He was utterly uncomplicated, lacking in artifice or pretense. He didn't like opera or ballet and didn't care who knew it. He never developed a taste for fancy food, preferring steak and butter pecan ice cream to almost any other menu combination. He always counted being the first Eagle Scout president one of his proudest moments.
When he woke up in subzero Vladivostok during his 1974 summit with Leonid Brezhnev, the first thing he wanted to know was the score of the Michigan-Ohio State football game.
The genuine article
Other presidents have pretended to be average Joes, but Ford's common touch was the genuine article. In the final days of the ill-fated 1976 campaign, for example, his entourage was booked into a Marriott Inn in Cleveland. As he entered his ninth-floor room for a few hours of downtime, the president noticed he was staying in the Emperor Suite.
"I don't like that," he growled to an aide. A piece of cardboard was quickly taped over the nameplate with the suite's new name scrawled in felt-tip pen: "Jerry Ford's Room."
In 25 years as a GOP congressman from Grand Rapids, Ford developed a reputation as a bit of a dullard. That unfair rap - he once conducted his own federal budget briefing without notes - is probably responsible for his being president. Richard Nixon picked Ford to replace disgraced Vice President Spiro Agnew as "impeachment insurance" - nobody would dare remove him, Nixon bet, if Old Jerry were the alternative.
It was a lethal miscalculation: the country was actually desperate for an unimperial president who, at his first state dinner a week into the job, danced up a storm to a tune called "Bad, Bad Leroy Brown."
Code of ethics
After Nixon's divisive reign, Ford's normalcy and personal integrity were potent political assets. Asked at his first press conference if he planned to issue ethical guidelines to avoid another Watergate, he politely replied: "The code of ethics will be the example I set." Coming from Ford, no followup was required.
He toasted his own English muffins, scooped his golden retriever's poop from the South Lawn, and was master of the small gesture - like calling a reporter's spouse on the eve of cancer surgery, with breast cancer survivor Betty Ford offering encouraging words on an extension line.
Unlike most in his profession, Ford refused to take himself seriously. Heading home from a political trip as vice president, he wandered up to the press section of his turboprop Convair 580, martini in hand, and asked: "Say, what did you think of my speech?"
Not wishing to be impolite, nobody spoke, so he answered himself: "Not worth a damn, was it?" Then out came that booming, infectious, middle-American laugh of his.
His 1,076-day accidental tenure may never rank among the greatest of presidencies. But his pardon of Nixon, which doomed his election chances in 1976, is seen as more of an unselfish act of statesmanship as time passes.
Ultimately, history may well decide that Ford's enduring legacy is summarized in the title of his memoirs, "A Time to Heal."
"Amidst the worst constitutional crisis since the Civil War, thank God for Jerry Ford," Vice President Cheney, his White House chief of staff, told me in 2002. "He was there when the country needed him. He served superbly under extraordinary circumstances."
Cheney's veneration for his former boss is echoed by hundreds of Ford associates, who for a quarter-century gathered each year for an alumni dinner hosted by Jerry and Betty Ford. It's difficult to imagine another president generating that level of sustained affection decades after becoming a private citizen.
By the 2002 dinner, Ford was looking and sounding frailer. In remarks that choked him up and brought tears to the eyes of many former colleagues, he concluded the evening by saying: "I look forward to seeing you next year - I hope to be around."
'Aristocracy is of the soul'
On February 28, 1976, Ford was blitzing Florida during that bitter primary struggle against Ronald Reagan. Toward the end of a typical marathon Ford day - 16 events, 13 cities - he was drenched in a sudden downpour at a shopping mall in Boca Raton. When he started to speak, his hair was slicked back, his suit a sea of wrinkles. The leader of the free world was a mess, and he knew it.
"We've had a little rain," he told the audience, "and I should apologize for my appearance, but there's an old saying: 'Aristocracy is of the soul, not of the cloth.' So, I don't look very good, but I think I'm a darned good president."
Historians will no doubt debate the merits of that waterlogged self-assessment forever, but there can be no argument about this: Jerry Ford was always a darned good guy. Those of us lucky enough to have been along for part of the ride cherish the experience, and savor our memories.