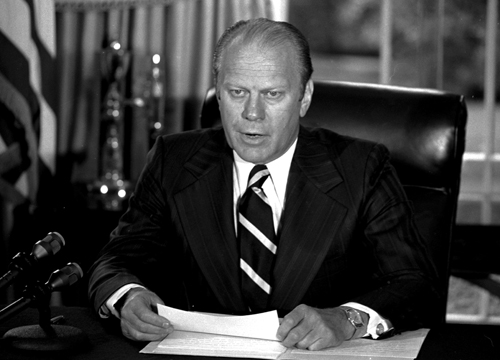 The presidential pardon of Richard Nixon's Watergate misdeeds defined Gerald Ford's singular presidency.
That is not exactly what Ford had hoped. He saw Nixon's pardon as the first step toward being elected to the presidency on the merits of his own work. And there was no way Ford could focus on the nation's business as long as Nixon's legal fate remained unresolved. A criminal trial could take years, and Nixon would not wait out that time quietly, Ford wrote in his autobiography.
Yes, he hoped that pardoning Nixon would soothe the wounds of anger and distrust inflicted on the nation by Watergate. He felt, too, that Nixon and his family had suffered enough.
But in pardoning Nixon September 8, 1974, Ford was tending to his own future, too. "I had to get the monkey off my back," Ford wrote in his 1979 memoir, "A Time to Heal."
In fact, pardoning Nixon did nothing to seal Ford's place in history as, he hoped, a popularly elected president. Instead, the pardon had the effect of denying Ford his goal and delivering his opponent, Democrat Jimmy Carter, the White House in the 1976 election.
Even as he pondered the question that summer of 1974, Ford saw the downside no matter what he did.
If he sided with the 56 percent of Americans who wanted Nixon denied a pardon and tried in court, the legal drama would overshadow Ford's administration and possibly his election campaign.
Nixon, after all, had not been indicted but stood accused of serious crimes that would take time - perhaps years - to sort out. A grand jury had voted 19-0 to name him an unindicted co-conspirator in the coverup of White House involvement in the 1972 break-in at Democratic headquarters in the Watergate office building.
On the other hand, granting a pardon could touch off an uproar that would sink Ford's election hopes.
"I'm aware of that," Ford recalled snapping at a cautious aide. "It could easily cost me the next election if I run again. But damn it, I don't need the polls to tell me whether I'm right or wrong."
Ford sought wisdom from the nation's founders, who had foreseen the possibility of a president faced with just such a choice.
"Oftentimes a pardon can be issued to maintain public order and confidence," Alexander Hamilton counseled from the pages of The Federalist Papers, a series of articles published between 1787 and 1788 aimed at persuading New York voters to ratify the proposed constitution. They appeared serialized in New York newspapers.
The Supreme Court, too, offered direction in the form of a 1915 case in which the justices ruled that a pardon "carries an imputation of guilt, acceptance and a confession of it."
"So I had the legal authority to move ahead," Ford wrote. But arriving at the decision to grant the pardon was only the first step in Ford's painful political and personal struggle to shake himself - and the nation - free of Watergate.
Nixon, of all people, held up the process when he balked at Ford's request for a public statement of contrition.
"President Nixon is not issuing any statement whatsoever regarding Watergate, whether Jerry Ford pardons him or not," declared Nixon's spokesman, Ron Zeigler, Ford wrote.
The defiant style and the condescending use of Ford's name tempted Ford's aides to get up and leave a meeting with Nixon's representatives. Instead, Zeigler drafted three versions of the statement, the first "disastrous," Ford wrote.
The final draft, while worded more strongly, bore no acknowledgment of guilt.
"That the way I tried to deal with Watergate was the wrong way is a burden I shall bear for every day of the life that is left to me," Nixon wrote.
Before taking the statement back to Washington, Ford's aides asked to see Nixon. Shuttered in his San Clemente, California, offices, Nixon was gaunt, shrunken and unresponsive. His handshake was weak, Ford's aides reported.
"His attention span was short," Ford wrote. "What few remarks he made were left incomplete, in mid sentence."
"I was taking one hell of a risk, and he didn't seem to be responsive at all," Ford wrote. Still, he accepted the statement and made his way to the Oval Office. Ford turned to face the cameras, and the nation.
"My conscience tells me it is my duty not merely to proclaim domestic tranquility but to use every means that I have to ensure it," he explained. And with that, Ford read from the text of the pardon.