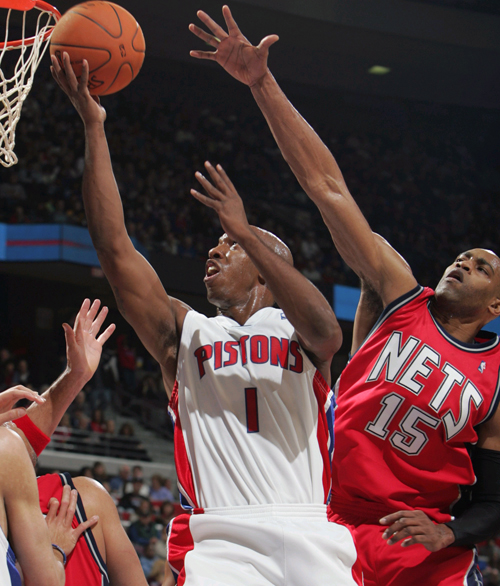 Vince Carter has tried to shrug off his recent shooting woes and his most inconsistent play as a Net. But he finally admitted Tuesday it's weighing on his mind.
"I sat at home one night and said, `What the hell is a (Vince Carter) game?'" Carter said Tuesday morning. "I don't know. I've heard it a couple of times now. Whatever it means, it has to come out."
Whatever it is, Carter was having one of them against the Pistons, scoring 28 points to go with five rebounds. But Carter couldn't finish. He missed a 17-foot jumper from the right wing in the closing seconds of a 92-91 loss at the Palace of Auburn Hills.
There was plenty of contact on the possession as Rasheed Wallace ran into Carter before he freed himself for the jumper. But nothing was called. The Nets' bench was incensed. After the game, coach Lawrence Frank ran onto the court screaming at the officials and had to be restrained.
Wallace and Richard Hamilton each had 21 to lead the Pistons (18-8). Chauncey Billups, who scored 27 against the Nets nine days ago, shot just 1-for-10, and finished with 6. But he made two foul shots with 7.2 seconds left to give Detroit the lead for good.
Richard Jefferson added 17, but missed a critical foul shot with 57.5 seconds left for the Nets, who have lost three straight and fell to 11-17.
The Nets took an 80-73 lead with 7:23 left after a slam by Jason Collins (season-high 13 points). But the Pistons tied it at 81 after a Hamilton three-pointer with 5:17 to go. Collins gave the Nets the lead again with a 16-foot jumper.
The lead exchanged hands six times over the next 3:24. But it was tied at 90 after Tayshaun Prince made two from the line.
On the ensuing trip, Richard Jefferson was fouled and made one-of-two for a 91-90 Nets' lead with 57.5 left.
Billups was fouled by Carter with 7.2 seconds left and made both to give Detroit the winning one-point margin.
Carter, who has been reluctant to talk about himself lately, said he's not doing enough to help the Nets. They need him more than ever with Nenad Krstic out for the season after tearing his ACL.
"I can do better, of course," he said. "I can play better. I got to hit shots. I got to rebound more. I got to do what needs to be done.
"We all have to do it. (But) I have to find it deep down inside, just to get it done. And I'm one to do that."
It has been a rough stretch for Carter. He was averaging 20.7 points a game on 36.6 percent shooting in the six games before Tuesday, and was out of it on both ends of the court in the Nets' loss at Milwaukee on December 23.
Carter took just four shots in the first half and was scoreless at halftime Saturday.
But Carter came out more aggressive against the Pistons. He attempted a shot on the Nets' first trip and took 10 by halftime, which New Jersey trailed 47-39. Carter was only 3-of-10 with nine points at intermission, but dished out five assists.
Carter said he will turn it around and he doesn't need any Nets coaches to speak to him to try and light a fire under him.
"I don't get into all that," he said. "I come to play every day.
"Everyone has an opinion how you should go about things, how they went about things in their careers, well, play through it. That's the only way I know. ... I'm going to keep playing through it until things are back."
Bucks surprise Spurs
Michael Redd scored 36 points and Australian Andrew Bogut added 14 points and 11 rebounds to help spark Milwaukee past flu-stricken San Antonio 114-107 Tuesday.
The victory enabled Dallas to move past the Spurs for the best record in the National Basketball Association and gave the Bucks their fifth victory in a row and first triumph on the Spurs' home court since 2001.
The Spurs were without guards Manu Ginobili and Brent Barry as well as forward Matt Bonner. They raced ahead 78-65 with 16 minutes remaining but could not hold off the Bucks.
In other NBA action: Indiana 81, Houston 76; Washington 116, Memphis 101; Minnesota 100, Chicago 98; Dallas 97, Charlotte 84; Denver 116, Boston 105; Phoenix 110, Portland 87; Utah 102, LA Clippers 92; Seattle 102, New Orleans 94; Golden State 116, Philadelphia 97.