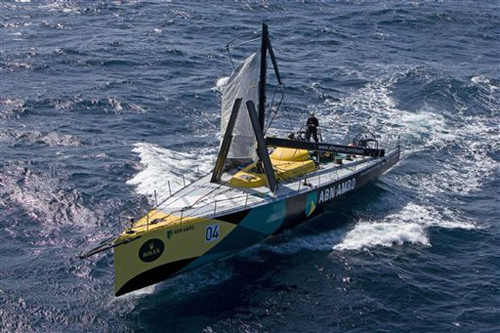 Eight crew members abandoned their sinking boat and another three badly-injured sailors were airlifted from the deck of New Zealand maxi yacht Maximus during a rough Sydney-Hobart race yesterday.
Maximus and sophisticated Dutch entry ABN AMRO were both dismasted in rough seas overnight, five other damaged boats were forced to retire and the 38-year-old timber boat Koomooloo was adrift and sinking.
Koomooloo's crew issued a distress signal and abandoned their Australian boat after it was damaged when it fell heavily off the back of a steep wave.
They were safely plucked from their life rafts by British entry Adventure, crewed by Royal Army Signal Corps members, and later transferred to a police launch.
"We did everything we could to save the boat," Koomooloo's owner and skipper Mike Freebairn told reporters.
He told race officials his crew had ripped out the boat's floorboards in a vain attempt to find the leak. Koomooloo, which won the race in 1968, recently underwent extensive restoration.
"We are all pretty devastated. It's been my life for 10 years. We've restored every nut and bolt," he said.
Six crew members were hurt on board Maximus when its US$500,000 carbon-fiber mast snapped. ABN AMRO was leading the 78-strong fleet when it was dismasted but no one on that boat was hurt.
The Maximus crew members were hurt when the boat's mast snapped and brought tangled rigging down onto the deck in darkness amid headwinds of up to 30 knots and swells of about three meters.
"There was a hell of a crack... it smashed all the deck and knocked guys down," Maximus co-owner Bill Buckley told Australian Broadcasting Corp. radio.
Race officials and a rescue helicopter spokeswoman said one crew member had suffered chest injuries, another had a suspected broken pelvis and the third had a back injury.
All three were flown by helicopter to hospital, while another three of their crew mates suffered minor injuries.
The police launch carrying Koomooloo's crew later picked up the skipper of Australian boat Illusion after he suffered cracked ribs, officials said.
Strict new safety rules were put in place after six sailors died and dozens were plucked from the sea in a terrifying storm during the 1998 race. Minor injuries are still common during the grueling 628 nautical mile race.
Maximus had overcome rigging problems shortly after Tuesday's start in Sydney Harbor to sail past 2005 winner Wild Oats.
"I think we were leading when it broke, we were leading the race, so it's been a hell of a devastation," Buckley said.
Maxis Wild Oats and Skandia were leading the fleet, but rough weather meant Wild Oats was unlikely to better the race record of one day, 18 hours, 40 minutes and 10 seconds it set last year.