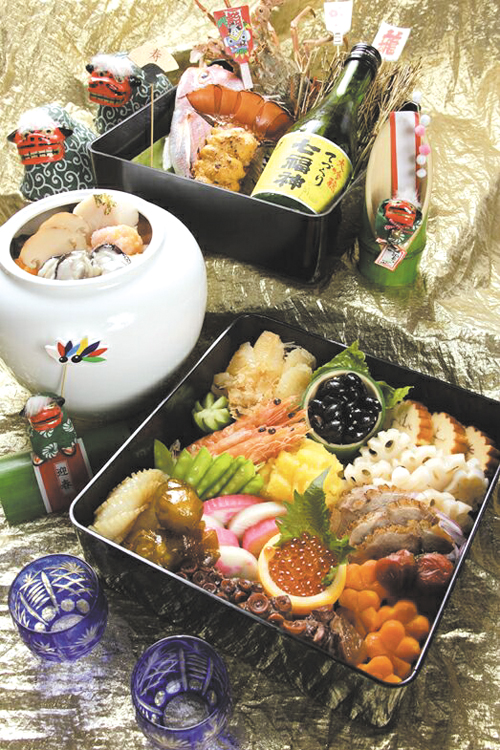 As Taiwan makes its way into the global market, the number of foreign businesspeople is increasing. In addition to offering traditional western Thanksgiving and Christmas Feasts, Grand Formosa Regent Taipei's Japanese New Year cuisine is also becoming more popular.
This year, WASABI, the Japanese restaurant located on the fourth floor of Taipei 101 Mall, is introducing the Japanese Imperial Feast for Takeout, with exquisite cuisines placed in an attractive Japanese lacquer box and a Japanese Buddha's Tureen made by five-star chefs with fresh ingredients completely imported from Japan. This Imperial Feast brings a brand new experience to Japanese New Year's cuisines.
Solar New Year to the Japanese is like Lunar New Year to the Chinese; family members gather after a year of hard work to spend some quality time together, and most people order an Imperial Feast to take home so that Mom would not have to slave over the hot stove during the holidays. Thus, many of the dishes in the Imperial Feast are pickled so that they can be preserved for longer and eaten cold over a course of five days. The choice of shape and color is especially important as they represent fortuity.
"The Japanese Imperial Feast that we have this year utilizes the five methods, colors, and flavors customary of Japanese traditions," says WASABI's Executive Chef Yang Chen-chuang. "The five methods being raw, bake, stew, steam, and fry; the five colors being red, yellow, green, black, and white; and the five flavors of sour, sweet, bitter, spicy, and savor. Be it the use of ingredients, color, or taste, each step follows closely the Japanese customs for festive cuisine."
The traditional Japanese cuisine is placed in a wooden lacquer box that is split into two layers. On the top layer are appetizers stewed in sweetened soy sauce, including black beans to symbolize a year's hard work and chestnut balls (signifying wealth).
The Japanese Imperial Feast at WASABI is available only for takeout for NT$4,800 including a bottle of smooth sake. A limited 88 sets are available, so reserve them now before they're gone! Orders accepted starting December 25th; pickup from afternoon of December 31st to January 1st. Please call (02)8101-8166 (WASABI) for more information.