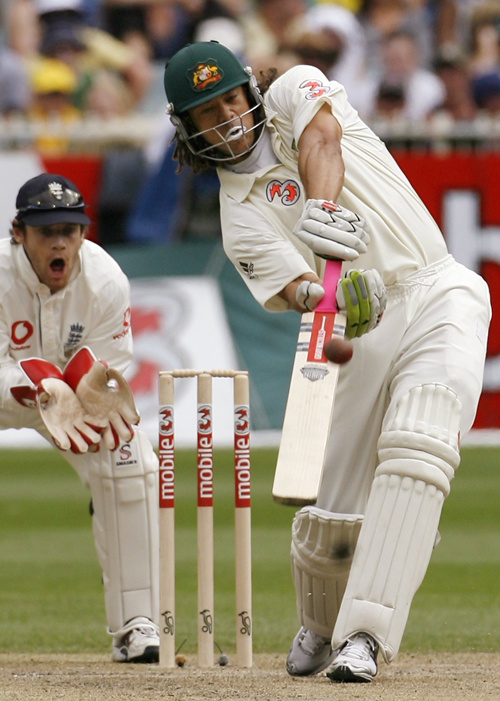 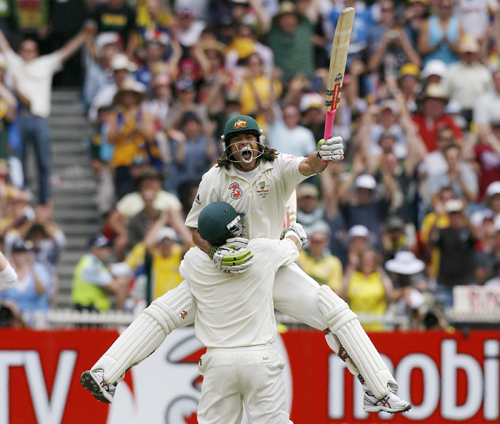 In 2000, good mates Matthew Hayden and Andrew Symonds found themselves in the water struggling for survival, after their boat capsized while fishing near Queensland's North Stradbroke Island.
On that occasion the determined pair swam more than a kilometer to shore and safety.
At the Melbourne Cricket Ground yesterday, they again found themselves thrown together under duress, but this time it was Australia's first innings in the fourth Ashes Test that needed rescuing.
And once again the pair toughed it out and overcame the odds, first defying a buoyant England attack and then eventually tearing it apart as they put on a match-turning 279 for the sixth wicket.
Symonds' life was not at stake this time, but his Test career certainly was, and the all-rounder responded with his second timely batting performance in as many Boxing Day Tests.
He came to the crease at 84 for five and with his own place in the side under intense scrutiny after two more failures with the bat in the third Test in Perth, but finished the day an Ashes hero after posting a memorable maiden Test century in front of 75,770 fans.
"It's been an amazing Test match for me. I didn't think I would be anywhere near playing in the series, to playing with Shane Warne out here getting 700 wickets, scoring 100 with one of my best mates of all time in the Boxing Day Test ... it's been a fair old week," Symonds said.
Despite his belligerent 72 from 54 balls in the corresponding game against South Africa 12 months ago, Symonds averaged a modest 18 with the bat and 40 with the ball in his previous 11 Tests.
With the England bowlers pressing, the powerful right-hander looked uncomfortable early as he tried to survive a testing period directly before lunch, and took 21 balls to get off the mark.
"I was very nervous when I first got out there, but I was seeing the ball well out of the (bowler's) hand and after a dozen balls I was thinking where am I going to get a run here?" Symonds said.
Arguably playing only because of Shane Watson's injury woes, as Australia looks for its answer to Andrew Flintoff, Symonds was also quite fortunate to survive an lbw appeal by Monty Panesar, with umpire Rudi Koertzen again failing to raise the finger despite the evidence in front of him.
However, Symonds blossomed as the innings developed and started to play some of the imperious strokes that have made him a one-day matchwinner.
Symonds brought up his first Test century in remarkable fashion, smashing part-time seamer Paul Collingwood way over long on for his first six.
"I was thinking whether I should do this (century) in ones or give it some 'Larry Dooley,' and I decided if he slipped one up I would give it some Larry Dooley, but I didn't know it went for six," he said.
It sparked wild celebrations from Symonds, who leapt high into the air and into the arms of Hayden, before punching the air in jubilation.
For the first time in his Test career, he had mixed aggression and caution with success, facing 215 balls in 316 minutes at the crease, hitting 15 fours and the six.
At stumps, Symonds had gone on to be 154 not out and the innings had been chanceless, although he survived another confident lbw appeal, this time turned down by Aleem Dar, from the bowling of Flintoff when on 142.
Hayden and Symonds had come together with their side trailing by 75 runs and facing a possible first innings deficit.
By the time Hayden fell to Sajid Mahmood for 153, the pair had batted for most of the day and helped give Australia a lead of 213 by stumps.
This time it was a shattered England that was all at sea and the possibility of a 5-0 series whitewash was becoming very real.