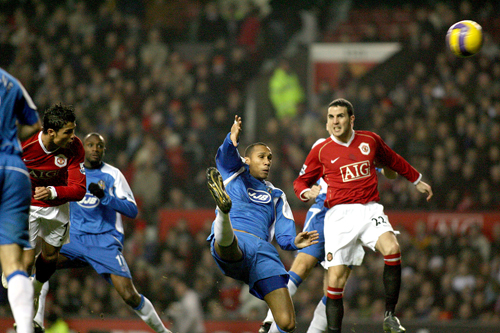 Sir Alex Ferguson savored scoring a psychological victory over his title rival Jose Mourinho as Manchester United moved four points clear of Chelsea at the top of the Premiership.
Chelsea opened an eventful Boxing Day program by dropping two home points in a 2-2 draw with Reading before United's clinical 3-1 demolition of Wigan at Old Trafford, featuring two goals from Cristiano Ronaldo and a third from Ole Gunnar Solskjaer, pushed Ferguson's side clear at the top of the table.
"Jose said the other day that we will drop points before the end of the season," said Ferguson. "But he is forgetting that they will drop points as well between now and the end of the season.
"That is the nature of football and you just hope you are consistent enough that you don't drop too many and can win the league."
"There will be some difficult days ahead and you have to handle those days and recover, as we did when we lost to West Ham last week.
"It just tells you football can knock you on your head, it turns the tables on you all the time but what is going to win the league is consistency and we have shown that so far this season."
Ronaldo scored a header and converted his own missed penalty kick within five minutes of coming on as a halftime substitute after Wigan had frustrated the home side in a goalless first half.
Added to the two goals the Portuguese winger scored in Saturday's 3-0 win at Aston Villa, they took Ronaldo's tally for the season into double figures and marked a fabulous Christmas weekend for the United fans' favorite.
"I thought he could always change the game with the form he is in," said Ferguson of his halftime introduction of Ronaldo.
"But to score from a corner kick with a header was a marvelous start and I was really pleased with the way we started the second half and put them on the back foot."
Solskjaer's seventh goal of the season made it three before Leighton Baines scored a last minute penalty for Wigan.
Blues rue own goal
Chelsea lost ground to the Premiership leader after Didier Drogba appeared to set the reigning champion on course for three priceless points with two typically clinical headers.
But the Blues were thwarted by a bizarre own goal from Michael Essien with just five minutes remaining.
Reading's Kevin Doyle - anonymous virtually all afternoon - charged down the left and fired in a bouncing cross. Ashley Cole's attempted clearance bounced off Essien and spun past Chelsea's helpless goalkeeper Hilario.
The draw was made worse for Chelsea by manager Jose Mourinho's announcement that influential skipper John Terry, also the England captain, may need surgery for his back problem.
The center half, who missed this match, has now been absent from Chelsea's last four games and Mourinho said: "I've no idea when John will be back. The medical department have said surgery might be a possibility. I want them to make a quick decision."
Mourinho is also waiting for an update on Joe Cole's fractured foot with the England midfielder possibly also facing an operation.
"It's the same with Joe Cole. I don't know if he will need surgery or not."
And the Portuguese said the absence of Terry and goalkeeper Petr Cech had added to Chelsea's worries.
"To lose Petr and John at the same time is a very difficult problem to solve, especially in a squad without more central defenders."
In other Tuesday action: West Ham 1, Portsmouth 2; Tottenham 2, Aston Villa 1; Blackburn 1, Liverpool 0; Everton 0, Middlesbrough 0; Sheffield United 0, Manchester City 1; Bolton 2, Newcastle 1.