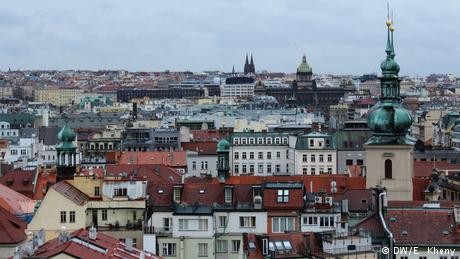 Situated in the Czech Republic, Prague is famously known as the "City of 1000 Spires". Even before stepping down from the bus, I could see the silhouettes of spires etched into the city's skyline at a distance. I knew then that I had arrived.

With the passage of time, a mix of architectural styles emerged in Prague, fusing to create a mesmerizing spectacle. Spared by the unfortunate fate which met other European cities in the Second World War, this capital city is to this day home to some original historic buildings.

In Prague, Romanesque rotundas from the year 800 meet Gothic elements from the 13th century, while 16th century geometric Renaissance competes with 17th century Baroque effects. Distracted by the rows of beautiful buildings, I tried not to loose my way in the maze of winding streets which make up the Old Town.

As a norm, it is always packed with hundreds of people at any given time of the year. The main attraction here is the world's oldest functional astronomical clock -known as Orloj- which is an ancient visualization of time in our universe. The clock was stopped this year as it underwent repairs but it has been back in action since September 28, 2018. As the clock strikes the hour, an elaborate procession of the 12 Apostles commences alongside a play by other figures.

Before it all begins, phones and cameras are switched on and held overhead by tourists, who are determined to record everything. Despite being sandwiched in the middle of a big crowd, I watched in fascination as the skeleton - which represents Death - rang his bell and rotated an hourglass to start the procession. This 600 year old clock was mounted in 1410 on the gothic Old Town Tower, which was my next stop.

From the height of 70 meters (230 feet), I looked down at the city center dwarfed by the Church of Our Lady before Tyn. With two spires topping its towers, the church is a distinctive symbol of Prague. With gothic exteriors and baroque interiors, it is home to the oldest organ - dating back to 1673 - in the city. Admiring it from this perspective, I could understand why it is featured in many travel photographs and also rumored to have inspired the Sleeping Beauty castle.

King of Bohemia and Roman Emperor Charles IV is considered to be the most beloved king of the Czech people. Under his rule, in 1357, he commissioned the construction of the infinitely famous Charles Bridge and is known to have laid the first stone himself.

Today, this 516 meters (1693 feet) long pedestrian bridge not only connects the two sides of the Vltava River but it is also a gothic masterpiece and one of the most popular tourist attractions in Europe - and therefore, perennially congested.

Although I was expecting lots of tourists, the sheer volume of people during the day was overwhelming. The only time I was lucky enough to find the bridge relatively empty was on a weekday morning as early as 7 am when the tourist groups were not yet in full swing.

The local vendors had just opened shop as I took a leisurely stroll across the bridge, admiring its baroque statues. Forming two rows - one on either side -, these 30 statues of patrons and patron saints were erected between 1683 and 1714 across the entire length of the bridge.

Even today, people pay homage to the statuary of the Holy Crucifix and Calvary and also make a wish at the statue of St. John of Nepomuk. Although all the statues were replaced with replicas in 1965 and the originals were transferred to the National Museum, their importance continues to draw innumerable tourists here.

As in medieval times, I followed the way from the Old Town across the Charles Bridge to the Lesser Town, then further onto Prague Castle - the other most visited highlight of the city.

Climbing a series of stone steps through picturesque alleyways, I ascended up the hill towards the castle. Dating back to the 9th century, its massive 70,000 square meters premises include a number of churches, palaces, towers and gardens.

Known to be the largest ancient castle complex in the world, it is the seat of the President, home to the Bohemian Crown Jewels and the grounds offer some of the best panoramic views of the city.

The reality of this experience however can be quite tedious with a horde of tourists posing for photographs, selfie sticks poking out everywhere and long queues at the ticket office. Thankfully, I secured a small empty space in one corner to enjoy the view. From this vantage point, the red-roofed city stretched before me till afar, its fairytale beauty seemingly frozen in time.

Descending from the hill after my tour of the castle, I opted for a quick meal of traditional Trdelník - a type of rolled spit cake sprinkled with sugar and walnut mix - along with a glass of local red wine at a roadside kiosk. This saved me precious time since standing in long queues for a table at a restaurant is a common sight in Prague, especially in peak season.

Warm, delicious and cheap, this refreshment break energized me to dive into the life of Franz Kafka. The Prague-born novelist had a surreal and complex writing style which went on to coin the term 'Kafkaesque'.

On my way I passed the controversial fountain affectionately titled "Piss" which was installed in 2004 by artist David Cerny featuring two gyrating, mechanical men urinating on a map of the Czech Republic. Text a personal message to the number next to the exhibit and these fellows will happily waggle their bronze penises around to spell it out for you.

Leaving the fountain behind me I entered the Franz Kafka Museum to find it surprisingly full. Since this museum does not rank as a common tourist attraction in Prague, I had expected it to be relatively empty. Surely, I had underrated Kafka's popularity. The museum displays Kafka's letters, diaries and photographs giving insight into his life and writing. His first edition books are a highlight with dozens of people crowding around the display.

After this serious immersion experience, I walked around the area, keeping my eyes peeled for the John Lennon Wall. Many walk past it without much thought but there are those who make it a part of their agenda. This colorful graffiti wall - located in a quaint corner - is an odd addition to the old city. Although it was a normal wall till the 1980s, it has over time emerged as a symbol of peace.

On this autumn day, faithful fans were sitting in groups, listening to tunes played by a musician duo on guitars. Others waited patiently for a part of the wall to free up to take photographs. Despite the crowd there was no impatience or restlessness here, unlike the rest of Prague which seems to struggle with the growing burden of excessive tourism.