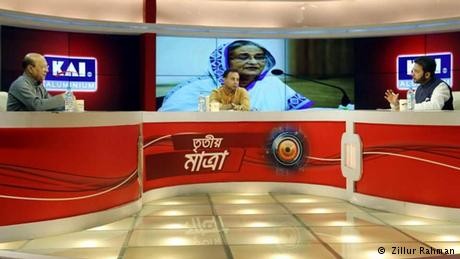 If there's one thing that has turned global attention to Bangladesh over the past several years, it's the repeated attacks by extremists on secular bloggers, activists and public intellectuals in the country.

These assaults have put an unacceptably high price on free speech in Bangladesh, which is the world's eighth most populous country and third-largest Muslim-majority nation.

The Bangladeshi government, led by Prime Minister Sheikh Hasina Wajed, hasn't helped matters either by cracking down on voices deemed critical of the ruling party and authorities.

Journalists and activists have often found themselves in the firing line, sometimes for criticizing the government in international media, as the case of distinguished photojournalist Shahidul Alam demonstrates.

Alam was pulled from his home by plain-clothes officers in August and detained for criticizing the government's handling of mass protests by students demanding better road safety.

Other prominent cases include the recent arrest of the publisher of the English-language New Nation daily, Mainul Hosein. Police said his arrest was linked to a television talk show appearance where he called a journalist "characterless" for asking him if he represented the political opposition.

To strictly monitor cyberspace and control public discourse, Hasina's government came up with the Digital Security Act (DSA). It contains provisions mandating long prison sentences of up to 14 years or harsh fines for any statement posted online that might disrupt law and order, hurt religious feelings or damage communal harmony.

Read more: Why Bangladesh student protests are not just about road safety

Individuals, including journalists, could be convicted of espionage for entering a government building and gathering information secretly using any electronic device. The act also allows police to search and detain individuals without a warrant.

Many inside and outside Bangladesh have lambasted the government for enacting the DSA. They say it's just going to be another instrument for the Hasina administration to silence critics. "This law will not only deal with cybercrimes but also gag the independent media," said Mahfuz Anam, a prominent editor.

Even before the dust settles on the digital security act, the government is attempting to put a new broadcast law in place. If it comes into effect, the measure will allow authorities to send someone to jail for giving "false and misleading" information while appearing on television talk shows.

It also foresees harsh punishment for fabricating information regarding the Bangladesh Liberation War in 1971 and for spreading rumors in broadcast and online media.

The bill envisages a Broadcast Commission ,which could act if it finds any advertisement, story, song, or other content going against Bangladeshi "sovereignty" or provoking "militancy, violence, destructive activities" or law and order concerns.

"It is very difficult to define what is 'misleading' and what is 'false.' A talk show is an opinion-based show not a news item, and the invited guest's comments generally come from his or her subjective outlook," Fahmidul Haq, a journalism professor at Dhaka University, told DW. "So the idea of expecting 'sincere' and 'absolute truth' in an opinion-based show is wrong in itself," he said.

Officials and government supporters, however, say the proposed law was aimed at "making broadcasting and online mass media stronger and dynamic." Some point to the recent controversy involving an internationally acclaimed Bangladeshi doctor as justification for the broadcast law.

Appearing on a talk show, Zafrullah Chowdhury, the founder of the rural healthcare organization Gonoshasthaya Kendra, claimed that Bangladesh's army chief General Aziz Ahmed was "court-martialed after arms and ammunition had been stolen from Chattogram when the army chief was the general officer commanding there."

The statement incensed Bangladesh's military establishment, which lashed out at Chowdhury for making "untrue and irresponsible comments." The doctor later had to recant his remarks and apologize for his "improper statement and wrong choice of words."

Bangladesh's cabinet approved the draft of the broadcast law days after Chowdhury apologized to the army chief.

But a big concern for critics is that the government will use it to suppress dissent and muzzle the already feeble freedom of expression in Bangladesh. "There is little hope to build safeguards to make sure the proposed law will not be used to muzzle press freedom," said professor Haq.

"It is always good to face 'misleading' information by presenting accurate information," he argued, stressing that enacting legislation like the broadcast law that have ample scope for misuse is not the right way to tackle the issue.

Bangladesh is expected to hold general elections at the end of December and many fear the proposed law may unduly favor the ruling party by forcing opponents and activists to exercise self-censorship.