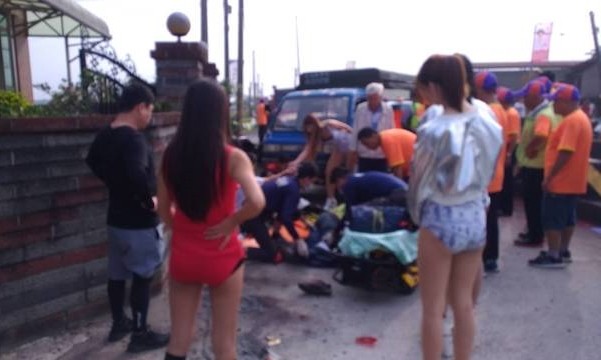 TAIPEI (Taiwan News) -- A pole dancer along with two others were injured this morning when the jeep she was performing on suddenly crashed into a beverage truck and scooter, reported UDN.

Early this morning, a convoy of jeeps with pole dancers performing on them sped through an industrial road in Chiayi County's Taibao City as part of a pilgrimage ceremony for Fuan Temple (福安宮). At 8 a.m., witnesses at the scene reported suddenly hearing a woman scream and seeing a jeep with a pole dancer on it collide with a beverage truck in front of it.

At the same time, the deputy director of the temple, who happened to be passing by on her scooter, was also caught up in the collision, suffering a broken bone in the process. The pole dancer was thrown from her platform on the jeep, causing bruises and abrasions.

Driver of scooter being treated for injuries. (Internet image)

Witnesses said the jeep suddenly rushed forward before smashing into the beverage truck and scooter. The driver of the jeep also suffered minor bruises during the crash.

All three were sent to Chang Gung Memorial Hospital in Chiayi for treatment, but none of the injuries were considered life-threatening.

In recent years, in an attempt to gain more attention to temple pilgrimages, scantily clad showgirls pole dancing on jeeps have been added to generate more "renao" (熱鬧) or "excitement," to energize the crowd and draw blessings from the gods. In Taiwan, pole dancers can also be seen at temple festivals, weddings, and even funerals to provide entertainment for both the living and the spirit world.