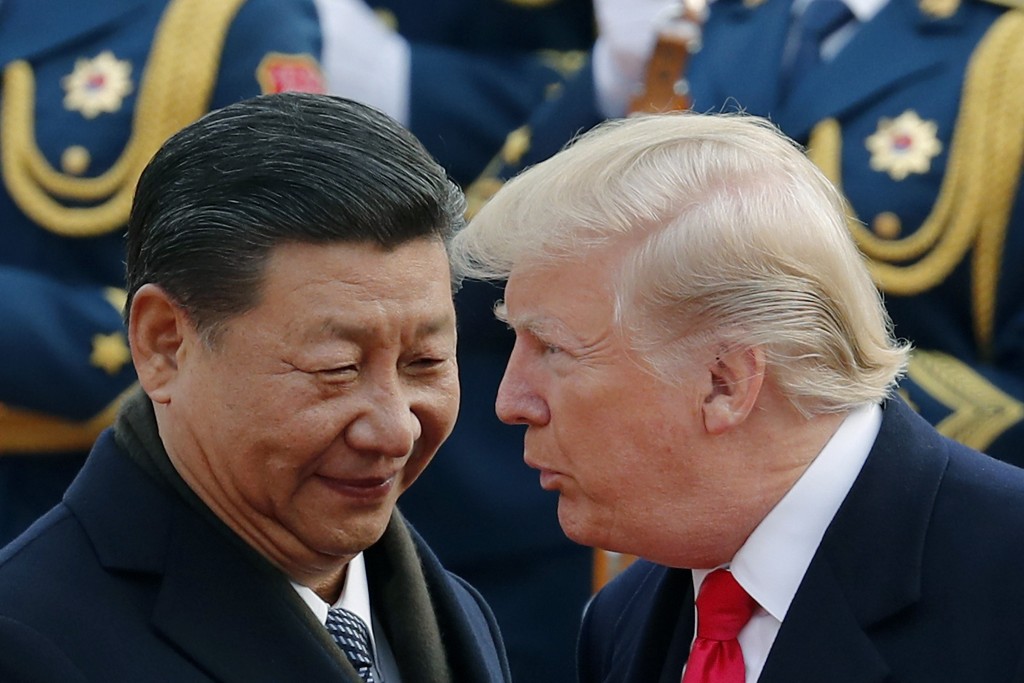 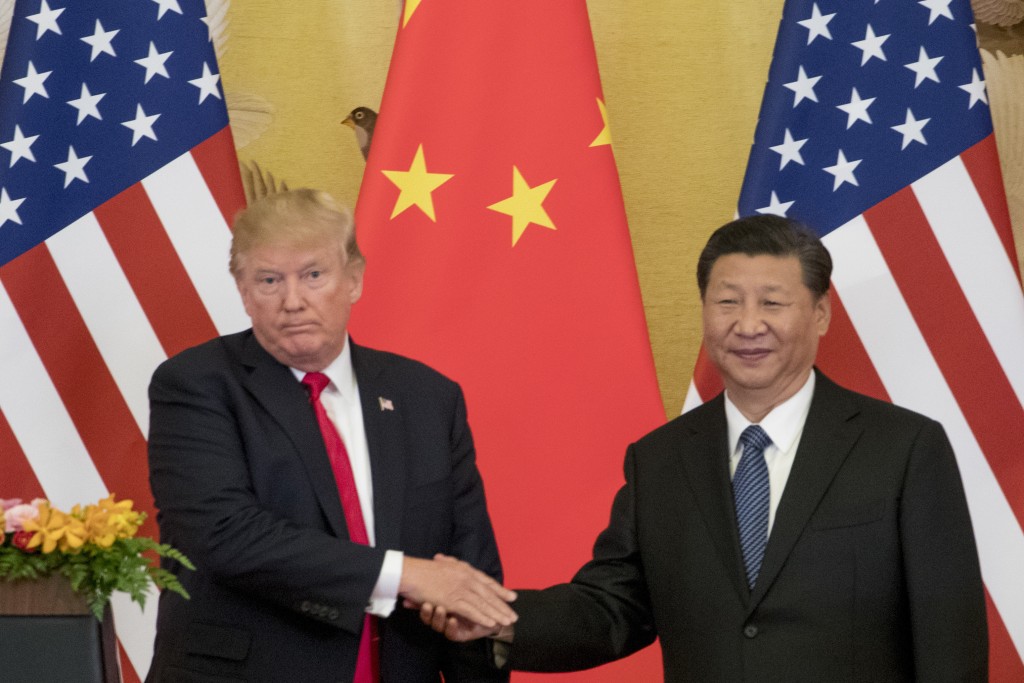 BEIJING (AP) — "Both ignorant and malicious" was how the official China Daily newspaper recently described comments by U.S. Secretary of State Mike Pompeo, offering a stinging insight into the current bitter tone of discourse between the two countries.

The White House's move to expand Washington's dispute with Beijing beyond trade and technology and into accusations of political meddling have sunk relations between the world's two largest economies to the lowest level since the Cold War.

A major speech by U.S. Vice President Mike Pence on Oct. 4 was the clearest, highest-level sign that U.S. strategy was turning away from engagement to confrontation. Pence accused China of interfering in the upcoming midterm elections to undermine President Donald Trump's tough trade policies against Beijing, warned other countries to be wary of Beijing's "debt diplomacy" and denounced China's actions in the South China Sea.

"What the Russians are doing pales in comparison to what China is doing across this country," Pence told an audience at the Hudson Institute think tank in Washington.

Both sides are trading increasingly sharp accusations over human rights and global hegemony, exposing an ideological divide that pits the two on a path of confrontation with no clear resolution in sight.

While a military clash has not been ruled out, American-based analysts envision a continuing push-and-pull for dominance between Trump and his Chinese counterpart, Xi Jinping, China's most dominant — and repressive — leader since Mao Zedong. Xi's aggressive foreign policy and authoritarian ways have altered views of China across the board.

"What has happened is a sea change in U.S. perceptions of China," said June Teufel Dreyer, an expert on Chinese politics who teaches political science at the University of Miami. While Chinese officials privately say they're concerned about the sharp deterioration in ties, especially given the massive links between the two in trade, immigration and education, it appears Beijing is more than willing to go toe-to-toe under the new circumstances.

Increasingly, the perception that as China grew more prosperous it would fall in line with global values and international law has been exploded. Into that breach has come hardening U.S. rhetoric toward Beijing and actions to counter, deter or defy China's moves in the international sector, particularly its "Belt and Road" trade and infrastructure initiative that seeks to expand Beijing's economic and political footprint from Cambodia to Cairo.

Beijing's outrage at Pompeo, meanwhile, was prompted by his recent warnings to Latin American countries about the dangers of accepting Chinese infrastructure loans that are a key aspect of Xi's signature foreign policy project.

"U.S.-China relations have deteriorated to their worst point" since the 1989 Tiananmen Square pro-democracy protests in Beijing that were crushed by the Chinese military, said Michael Kovrig, senior adviser for Northeast Asia at the International Crisis Group.

"It may not be a clash of civilizations, but it is a long-festering conflict of national, political and economic interest and systems that has reached a point of rupture," Kovrig said.

Xi has abandoned the strategy laid out by reformist leader Deng Xiaoping that China should bide its time and refrain from advertising its ambitions to become a world power. Instead, he has been accused of overreach by promoting China's drive to become a global technology leader by 2025, including by compelling foreign companies to hand over their know-how, and pushing Chinese-financed energy and transportation projects that leave target countries with unsustainable amounts of debt.

On the military front, a Chinese destroyer last month maneuvered perilously close to the USS Decatur in the South China Sea. The Chinese also denied a request for a U.S. Navy ship to visit Hong Kong and rejects U.S. concerns over its policies toward other countries.

"The U.S. simply aims to drive a wedge between China and relevant countries with those remarks," Foreign Ministry spokeswoman Hua Chunying said Monday. "It is meaningless and futile."

The tart rhetoric is evident on both sides.

Nikki Haley, the U.S. ambassador to the United Nations, said in a speech last week that China's government "is engaged in the persecution of religious and ethnic minorities that is straight out of George Orwell," referencing the internment of Muslims in the country's northwest in political reeducation camps.

This month, the United States went further by threatening to pull out of the Universal Postal Union because it says the treaty allows China to ship packages to the U.S. at discounted rates at the expense of American businesses.

Underlying the estrangement is the sense that Beijing lacks reciprocity, taking advantage of open markets and free societies to extend its interests, while denying the same benefits to companies, governments and individuals over which it has influence.

"My bottom line view is that Xi Jinping very much overplayed his hand taking advantage of the restrained and moderate (former President Barack) Obama," said Robert Sutter, a China expert at George Washington University. "Now he has an enormous American series of challenges to deal with, with no easy solutions."

While Chinese companies — often backed by easy credit from state banks — have been snapping up foreign assets, Beijing restricts such foreign purchases in key sectors such as energy, transport and telecommunications. Although China has loosened some joint-venture demands, including in the auto industry, that may be too little too late.

China is "not very willing to constrain itself under rules that it feels were forced upon it," said Dean Cheng, senior research fellow at the Heritage Foundation in Washington. "This includes the international trading system, which is dominated by the U.S."

Still, attempts to contain China along the lines laid out during the Cold War would be "difficult, if not impossible," given the broad range of contacts across political, economic and personal spheres, Cheng said.

The U.S. has also reinforced ties with Taiwan — claimed by China as its own territory — building an impressive new de facto embassy there, approving a major sale of military parts and services, and authorizing companies to help the self-governing island democracy build submarines to defend itself from China's threats to use force to bring it under Beijing's control.

The tensions are underscored by political uncertainties in both countries. Trump faces a referendum of sorts on his policies in next month's midterm elections, while Xi has come under rare criticism at home since he forced through a constitutional amendment in March to allow him to remain president indefinitely.

Xi is also beset by a slowing economy, made worse by U.S. tariffs that threaten the jobs of millions of Chinese workers. While China has retaliated with its own tariffs on U.S. goods, the loss of American markets will likely be a major drag on growth.

All such factors appear to speak poorly for any immediate resolution to the frictions.

Michael Mazza, a foreign policy expert at the conservative American Enterprise Institute think tank in Washington, said "competition will remain the norm" between the two countries unless China is willing to make significant changes in its domestic, economic and foreign policies.

"At this point, there is little reason to suspect that such a shift is in the offing," Mazza said.