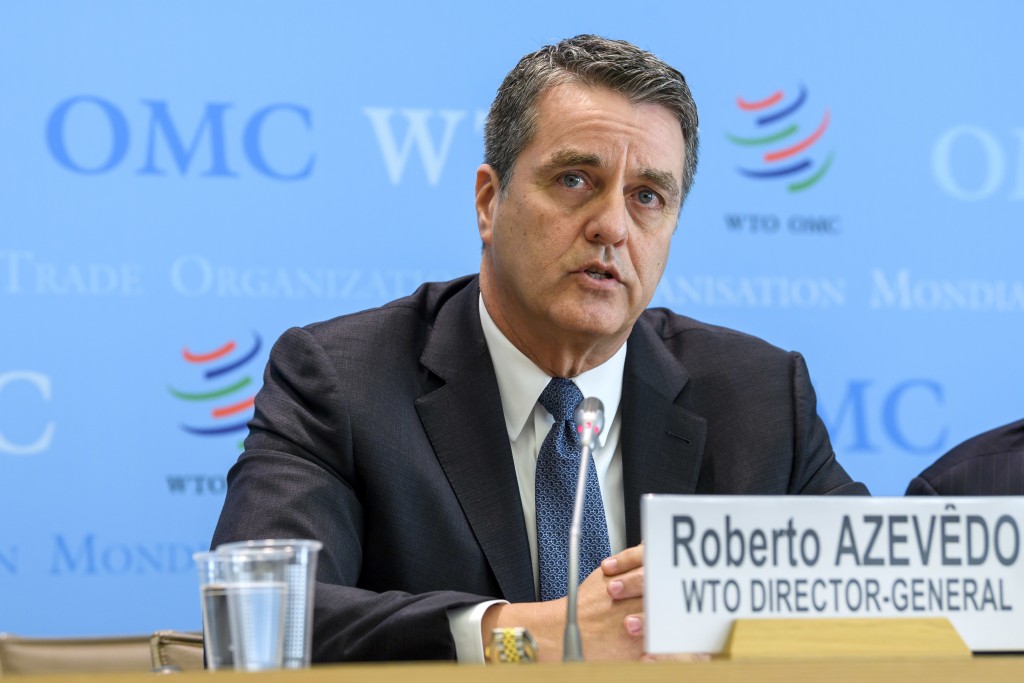 GENEVA (AP) — U.S. President Donald Trump wants to rip up the rulebook for global trade. China is by many accounts abusing it.

As a battle rages between the world's top economic power and the fast-growing Asian giant striving to take its place, Canada and the European Union are quietly working to update the laws of international commerce, which have not been changed since the internet boom.

The question is how to fix the World Trade Organization, which oversees trade rules and settles disputes as part of a global order the U.S. helped create after World War II to foster peace and get authoritarian countries to open up.

As it stands, the WTO is on track to become powerless by next year if the Trump administration continues to withhold support over its complaints that China breaks the rules.

The fallout could be big: Disputes like an ongoing standoff between plane makers Boeing and Airbus would go unresolved, gumming up the global trading system. Governments could feel empowered to change their trade policies on a whim, creating uncertainty for companies as they try to plan investments and business deals around the world.

Canada hosts ministers from the EU and about 12 other countries in Ottawa on Wednesday and Thursday to discuss reform of the WTO. Canada said it wants a meeting of "like-minded people" — and didn't invite the United States.

The EU, which is working bilaterally with China, last month floated ideas on how to change the trade body.

"We do believe the time has come for action," the EU's ambassador to the WTO, Marc Vanheukelen, told a panel discussion in Geneva this month. "We now need to put proposals on the table, and start negotiating."

The U.S. has largely self-exiled itself in the process. After plopping down its complaints on issues like state subsidies for Chinese companies or a lack of transparency from Beijing on China's domestic rules for business, it's sitting back as others work on a compromise.

"I know the EU has their paper, Canada and others are working on proposals," Dennis Shea, the U.S. ambassador to the WTO, said in the panel discussion. "If those proposals come to Geneva, we will certainly take a look at them."

Reform will be a tall order: The WTO works by consensus, and all 164 members will have to agree.

In the line of U.S. fire is the WTO Appellate Body, considered by some as the Geneva-based organization's crown jewel. Washington has blocked appointments to what should normally be a seven-member panel. Last month, the expiration of a term that went unfilled left it at the minimum three.

Its backlog of about a dozen cases is overloaded, and growing. And the clock is ticking. Another term expiration looms in December next year, which would halt its work altogether.

The U.S.'s main complaint is that China was allowed into the WTO in 2001 on the assumption it would fulfill certain promises, such as opening up its economy to foreign companies. But China has remained closed in many ways, arguing it is still a developing economy. For example, it asks foreign companies to set up joint ventures with local Chinese partners if they want to operate in the country. And the U.S. alleges China requires companies to part with intellectual property as a price of accessing its market.

Shea also says the appellate body has strayed from its original mandate by adding new powers and not meeting deadlines for cases.

Trump calls the WTO "unfair" and has threatened to withdraw the United States.

China insists it obeys the rules and notes its companies are paying 14 times more in intellectual property royalties to overseas owners than before it joined WTO. It is starting to open up its economy — slowly. It has agreed to let German carmaker BMW take over its Chinese joint venture — a first in the auto industry — from 2022.

China is almost more isolated than the U.S. on issues of trade. It is the defendant in half of all complaints before the WTO. It has tried to recruit Germany, France, South Korea, the EU and others as allies against the United States in its trade dispute — and not a single government has agreed.

They criticize Trump's tactics, but all agree with the U.S. complaints about China.

Those complaints are not new. Previous administrations railed about China and the WTO as well, but Trump's team has raised the pressure.

"What has changed is not the substance but rather the style of U.S. engagement," said Harvard Law school professor Mark Wu. "The U.S. has made clear that it will continue to block new appointments to the Appellate Body until its long-standing concerns are addressed satisfactorily.

"I expect the U.S. to stand firm on this pledge, even if it means paralyzing the Appellate Body," he said.

In many ways, the WTO is overdue for an update. It has helped lower tariffs dramatically over the years, helping boost economic fortunes, but its rulebook has hardly changed since it was founded nearly 24 years ago.

Dan DiMicco, a former steel executive who advised Trump in the 2016 presidential race, says the WTO has been too permissive with China in the hope that greater wealth would open up the Chinese economy and make it more democratic.

"Instead we got the opposite," DiMicco wrote in an email. "Frankly, ENOUGH IS ENOUGH!"

Jim Bacchus, a former Democratic congressman who once sat on the WTO's Appellate Body, says Trump is threatening the most successful venue for resolving disputes, and jeopardizing a fundamental U.S. interest for short-term gain. Bacchus has urged other countries even to unite against Trump's policies.

"The fact that they have gotten away with throwing their weight around so far through all their bullying of our trading partners only emboldens them to continue to do so," Bacchus said of the administration. "I believe it will catch up to them."