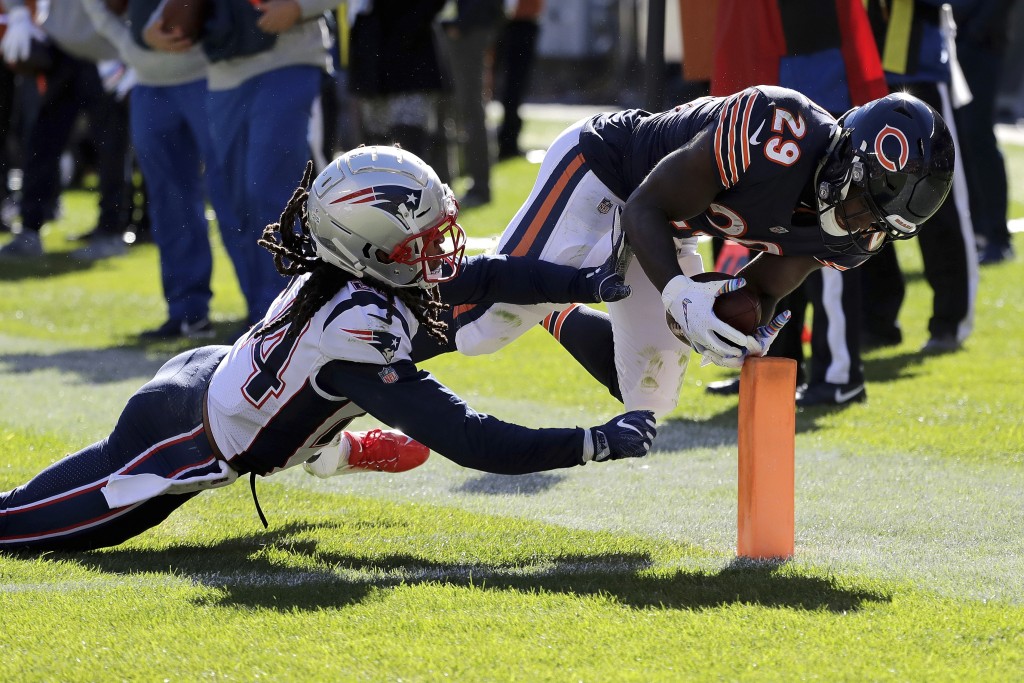 CHICAGO (AP) — Tom Brady and the New England Patriots are stacking up the victories and that's what matters most to them.

As for the aesthetics, they'll keep working on that.

"We need to make improvements," Brady said. "I think the more we're on the field, the more we can practice, the more we can figure out where everyone fits and what we're doing a good job at in general, those things start to sort themselves out. ... But I'd certainly take building on the wins rather than losing games."

Brady threw for three touchdowns and the Patriots hung on to beat the Chicago Bears 38-31 Sunday when Kevin White got stopped at the 1 on a 54-yard pass from Mitchell Trubisky.

The Patriots (5-2) won their fourth straight following a 1-2 start. Coming off a 43-40 win over Kansas City, New England came out on top when a swarming defense prevented White from crossing the goal line after he hauled in a heave from Trubisky on the final play.

That gave Chicago (3-3) its second loss in a row after winning three straight to grab sole possession of the NFC North lead.

Here are some things to know:

Already missing five-time Pro Bowl tight end Rob Gronkowski, the Patriots might also have to get by without promising rookie running back Sony Michel.

He lost a fumble and had to be helped from the field after he was twisted around while getting tackled by Bilal Nichols on the first play of the second quarter. In the previous three games, Michel rushed for 316 yards and four touchdowns.

Gronkowski missed his first game because of ankle and back injuries.

Mitchell Trubisky's accuracy came into question, but not his feet.

His career-high 81 yards rushing included a spinning, cross-field 8-yard TD run in which he initially scrambled back to about the 30. But he had two interceptions, should have had at least two more and finished 26 for 50 for 333 yards with two touchdowns.

The wildness was very apparent early against Patriot blitzes.

"Early on, it wasn't just Mitch," Bears coach Matt Nagy said. "Trust me. There were a lot of people that were out of rhythm."

The Patriots had been lacking a bonafide deep threat in the passing game, but recently acquired Josh Gordon is starting to make an impact. He had a 55-yard reception to set up Brady's 2-yard TD pass to James White to make it 38-24.

He now has 13 catches for 224 yards in four games with New England since a trade from Cleveland last month.

"We are just going to keep developing our confidence in one another, and he's making great plays when I throw him the ball," Brady said. "Just got to keep doing it."

The two-time All-Pro made little impact after injuring his right ankle early in last week's overtime loss at Miami. And it wasn't much different going against Brady and the Patriots.

Mack had one tackle, and he failed to register a sack for the second week in a row. He spent most of the time on the right side of the line of scrimmage instead of the left, where he usually plays. And he often dropped back in coverage.

"I don't know if it affected him yet," coach Matt Nagy said, referring to Mack's ankle. "Obviously we didn't feel it from our team as far as just getting the overall general pressure on (Brady)."

James White continues to give New England solid contributions in the receiving and running games.

He caught a team-high eight passes for 57 yards and two touchdowns. He also led New England with 40 yards rushing.

"You never know how a team is going to decide how to match up against you," White said. "No matter who is covering me, I just try to win my match whether it's a corner, safety, linebacker, D-ends. Just get open, man to man or find the right spot in the end zone and catch the ball and protect it."

White leads New England for the year in receptions with 45 and has six TD catches.