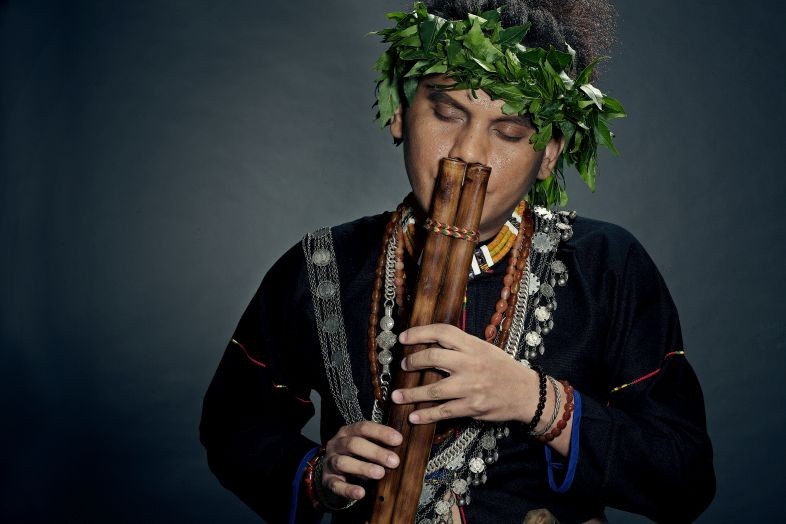 Sangpuy Katatepan Mavaliyw, a musician from Taiwan’s Pinuyumayan tribe, is cleareyed about the importance of environmental conservation, making it a central theme in his latest album “Yaangad,” or “life,” in the language of the indigenous people. “If Mother Nature is destroyed, other issues we fight for and the things we cherish will no longer exist,” he said.

A collection of original songs inspired by traditional tribal melodies, the record won Album of the Year at the 2017 Golden Melody Awards—the first time an indigenous language entry claimed the coveted honor. The soul-searching production was later named best album in the world traditional music category at the 2018 Independent Music Awards in the U.S.

Described by the GMA jury as possessing “an emotive voice rooted deeply in the land of Taiwan,” Sangpuy is a fixture in local and overseas music awards and festivals since his debut “Dalan” in 2012. Largely comprising traditional Pinuyumayan tunes blended with string instrument recordings, the album earned the artist his first GMA accolade of Best Aboriginal Singer in 2013.

“‘Dalan’ expresses my desire to spur young people’s interest in discovering our tribal songs,” Sangpuy said, reflecting his passion from an early age for Pinuyumayan culture and language.

“Dalan,” Sangpuy’s debut album of 2012, continues to attract attention and acclaim from music lovers at home and abroad. (Courtesy of KCS)

Born and bred in the Katratripulr community of southeastern Taiwan’s Taitung County, Sangpuy was initially exposed to indigenous knowledge and wisdom via the teachings of elders, as well as the tribe’s time-honored education system. Pinuyumayan boys are required to join the Palakuwan, a center of youth-based learning, and girls must study with their mothers or other matriarchal figures.

According to Sangpuy, this approach ensures the tribe’s language, music, oral traditions and values are passed down to the next generation. “Comprehending our language is crucial to understanding the essence of the profound Pinuyumayan culture,” he said.

“Perhaps my biggest motivation for learning the language of my people is a tape recording of my grandfather singing,” Sangpuy said. “I lost him at a young age and want nothing more than to honor his memory by perfecting my mother tongue and fully understanding the messages resonating in his voice.”

The recording “Yaangad” by Sangpuy is the first indigenous language entry to claim the prestigious GMA prize of Album of the Year. (Courtesy of KCS)

Another motivating factor is the six years Sangpuy spent as an assistant and leader of indigenous teenagers and young adults. As both positions demanded great dedication to the public affairs of Katratripulr, it was impossible for Sangpuy to leave his hometown or get married. “This experience offered me an invaluable way of connecting with the community I grew up in, as well as the priceless lesson of always remaining humble,” he said.

Through the Pinuyumayan education system, strong bonds are established among members of the tribe. This deep affection for and close link with Katratripulr remain the bedrock of Sangpuy’s life, even after he left home to work in northern Taiwan’s New Taipei City around the age of 27. The singer-songwriter believes a tribal saying best sums up this connection: “Unlike flies that only gather when there is something to be gained, our people are like bees and work together whenever or wherever for the welfare of the community.”

Such lessons on life and broader tribal philosophies are enshrined in Sangpuy’s music, especially the importance of maintaining a harmonious and respectful relationship with the environment. In “Yaangad,” the song “Kumuda,” or “What Happened,” is made up of a series of questions about what will the world be like if the ecosystem is destroyed. “The truth is humans need Mother Nature, but Mother Nature does not need humans,” Sangpuy said.

Tales told by the tribe’s elder are also a great inspiration to Sangpuy. The popular song “Sadeku na senan”, or “Light,” is based on story shared by his 96-year-old great-aunt. Centered on a warmhearted relationship between a god from the Moon and a mortal woman, the tale gave rise to a Sangpuy creation combining the familiarity of moonlight with an expression of gratitude for those who helped him in the course of his life.

With the well-being of the Earth and the tribe at the forefront of his mind, Sangpuy is irrepressible in sharing his music, life blessings, and delivering a message of care and concern for the environment. “Producing an album is like making wine; something to share with the world,” he said. “If someone is invigorated or moved by the taste, there is no finer compliment.”

As Sangpuy’s late father told him, sharing is the most noble of actions. This maxim, which has shaped his existence to date, is also helping the tribal talent remain true to his love for Mother Nature and roots while experimenting with new musical forms. (E) (By Chiang Pei-ying)

Write to Taiwan Today at ttonline@mofa.gov.tw

(This article is adapted from “Tribal Melodies” in the September/October 2018 issue of Taiwan Review. The Taiwan Review archives dating to 1951 are available online.)