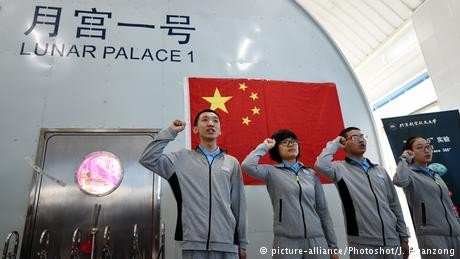 The 48-year-old astronaut Matthias Maurer might be one of the few Germans who knows how to say "lunar lander" and "descent orbit insertion" in Chinese. He's been learning Mandarin for six-and-a-half years now. He and many of his younger colleagues at the European Space Agency (ESA) understand that learning Chinese will help their careers. China is becoming increasingly important in space travel. While the United States and Russia have had to economize in recent years and private initiatives, such as Elon Musk's SpaceX, have entered into the equation, the Chinese government continues to invest more and more in space. In 2003, China became the third nation after the US and Russia to launch a human into orbit.

At the end of 2016, China provided details of its intentions for the next five years in a white paper: "To explore the vast cosmos, develop the space industry and build China into a space power is a dream we pursue unremittingly," it read. The ambitious plans include a 66-ton space station with a crew of three and a synoptic survey telescope that will resemble and surpass the Hubble Space Telescope, with a field angle that's 200 times bigger. If the International Space Station is dismantled in 2024, China will become the only nation with a permanent outpost in space.

Read more: Towards the Moon: Why Europe wants to work with China

Ambitious plans for the moon

In the next few months, Chinese space exploration will enter a new era with the unmanned landing of a probe on the far side of the moon, which is as yet unexplored territory. The plan is also for a Chinese astronaut to set foot on the moon by 2030. So symbolic in Chinese poetry, the moon of course plays an important role for China's space exploration projects. But a greater role is played by the moon's natural resources, such as aluminum and helium 3. It is thought that the latter is more abundant on the moon than the earth and has the potential of to be used for fuel in nuclear fusion power plants of the future. Furthermore, researchers assume that the hydrogen in deposits of ice recently found on the moon could be converted to rocket fuel. The moon could also be an ideal place for missions headed to Mars.

European states can only dream of such projects. Over a year ago, as a follow-up project to the International Space Station (ISS), the European Space Agency director general Jan Woerner proposed creating a "Moon Village" on the basis that the moon and the earth have similar geological make ups. The idea is to set up stations that could provide communication and navigation services or serve for storage. ESA researchers have learned that 40 percent of moon dust, of which there is a thick layer, comprises oxygen. They say that if it can be "cracked" this will allow for extended human stays on the moon. But the ESA lacks the funds.

Back to the moon

The US has also been uncertain on whether it can afford to continue participating in this costly space adventure. But while former US President Barack Obama put the brakes on certain expensive projects, his successor Donald Trump is keen on pursuing them. He wants the US to go back to the moon. "America will always be the first in space," he said when announcing a new Space Force military branch.

"My administration is reclaiming America's heritage as the world's greatest space-faring nation," he added. "We don't want China and Russia and other countries leading us. We've always led."

The last time a US astronaut walked on the moon was in 1972. NASA's new lunar mission could land another astronaut on there in 2026, four years before China intends to do the same. This would be a triumph that Trump could enjoy in office down the road, assuming he is re-elected president and that he doesn't flip-flop on the project out of fear its price tag will scare off his voters. However, US voters are no longer particularly receptive to the argument that progress in space travel is not only good for the military but also for civilian industries (telecommunications or environmental protection, for example).

This is why it makes sense to work on an international basis with projects such as moon stations or manned missions to Mars. The Europeans, Russians and Chinese are open to this, but Washington is reluctant to work with Beijing. China was not allowed to participate in the ISS, in which over 100 countries are involved. The US sees each Chinese rockets as a potential weapon and each satellite as a tool for spying.

Washington wants to develop its Space Force to protect navigation and communication satellites from attacks by Russia, China, North Korea and Iran, as US Vice President Mike Pence put it. For his part, the administrator of the China National Space Administration, Zhang Kejian, has insisted that China is looking forward to cooperating: "To the extent that agencies and countries from around the world can cooperate on space, it is absolutely in our interest to do so," he said. "I look forward to exploring more opportunities to do that."

The ESA is more open to working with China than the US, for political and economic reasons. It hopes that European astronauts will soon be able fly to Chinese space stations. Ten years ago, such an idea would have been unthinkable. The Russian space agency has also signed a deal with China to cooperate more closely, and they are planning a joint station on the moon.

That said, there are also nationalist rumblings from China. Referring to disputed territory on earth that China and other Asian states lay claim to, the head of the Chinese lunar exploration mission Ye Peijian recently said: "The universe is an ocean, the moon is the Diaoyu Islands, Mars is Huangyan Island. If we don't go there now even though we're capable of doing so, then we will be blamed by our descendants. If others go there, then they will take over, and you won't be able to go even if you want to. This is reason enough."

For now, the EU and Russia are pinning their hopes on rapprochement. ESA chief Woerner recently said that in tense times, science, especially space exploration, could serve as a bridge to weather the crisis. And Shi Zhongjun, China's ambassador to the UN and other international organizations in Vienna, has also been more inclusive: "CSS belongs not only to China, but also to the world," he said. "All countries, regardless of their size and level of development, can participate in the cooperation on an equal footing."

This is a sign of hope. After all, the moon, too, belongs to the world.