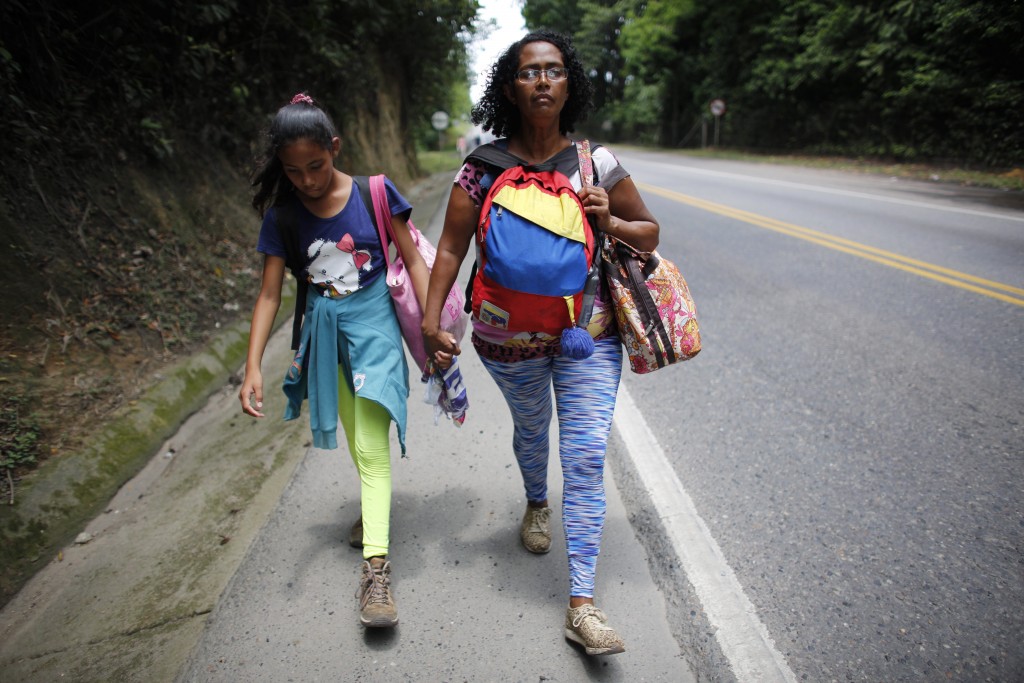 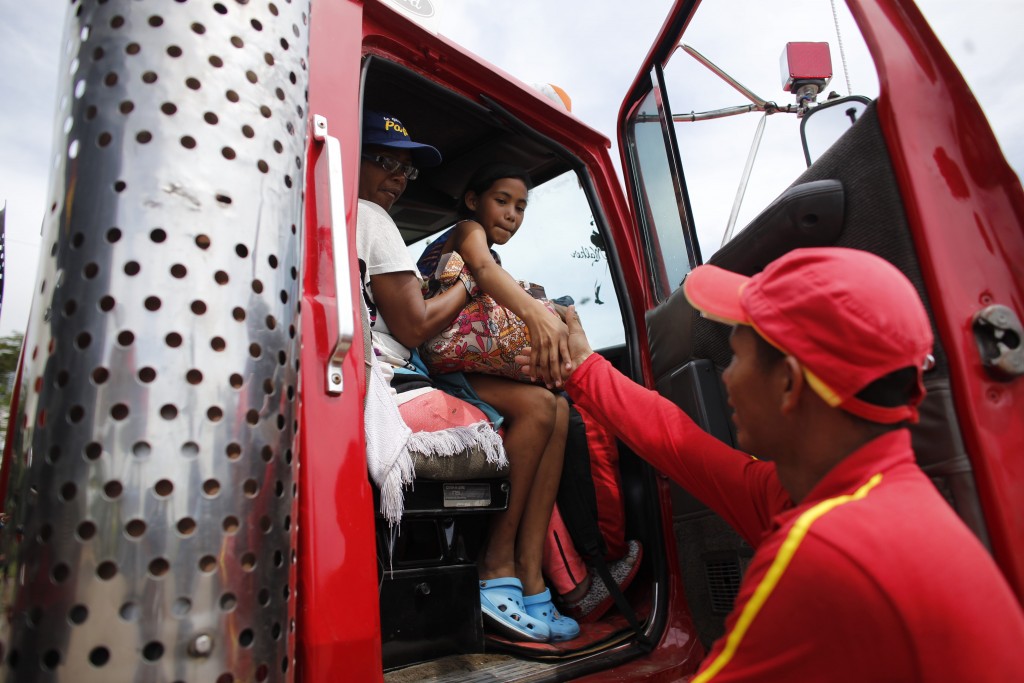 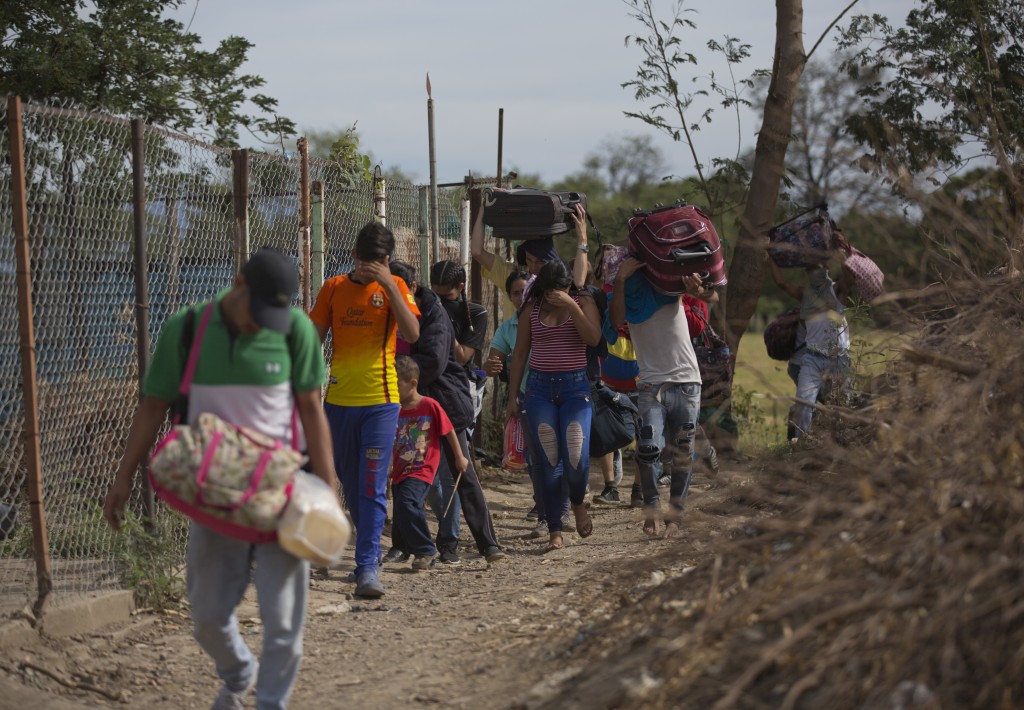 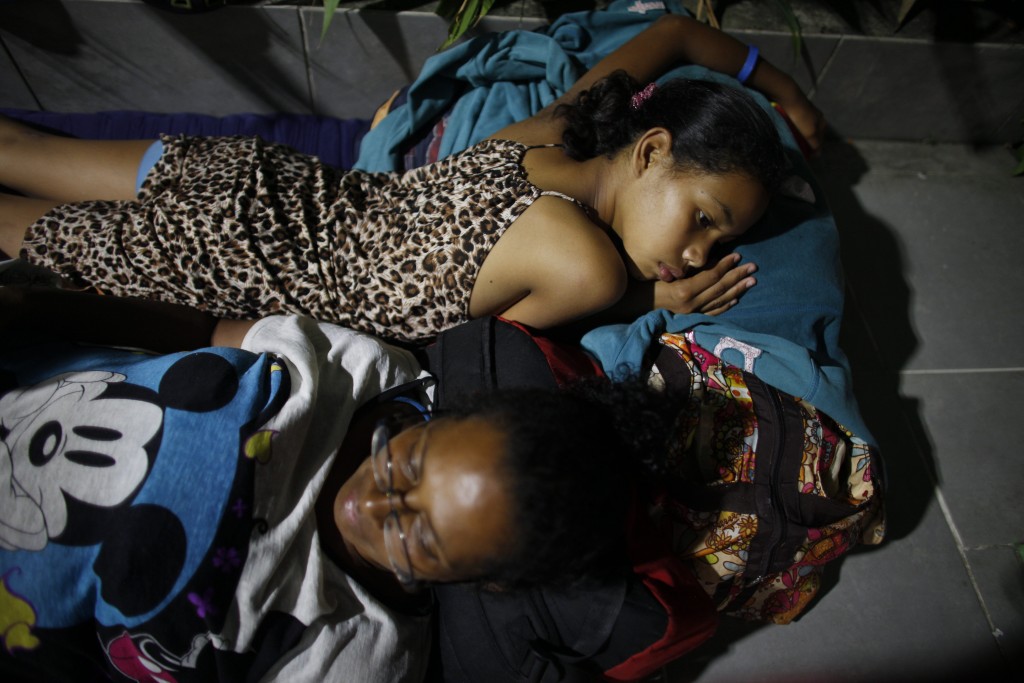 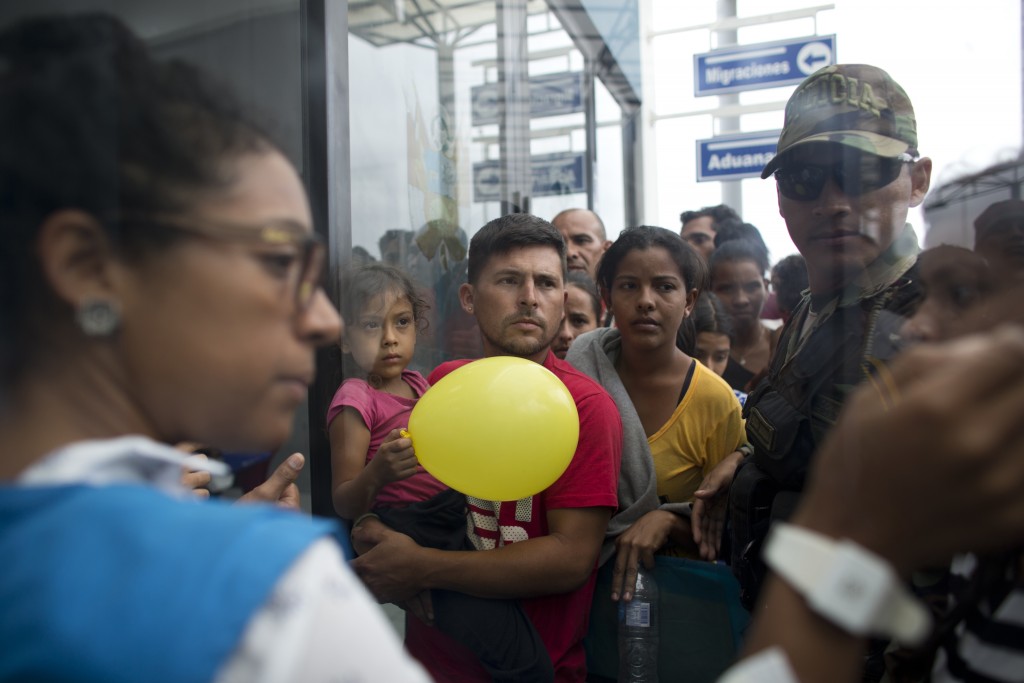 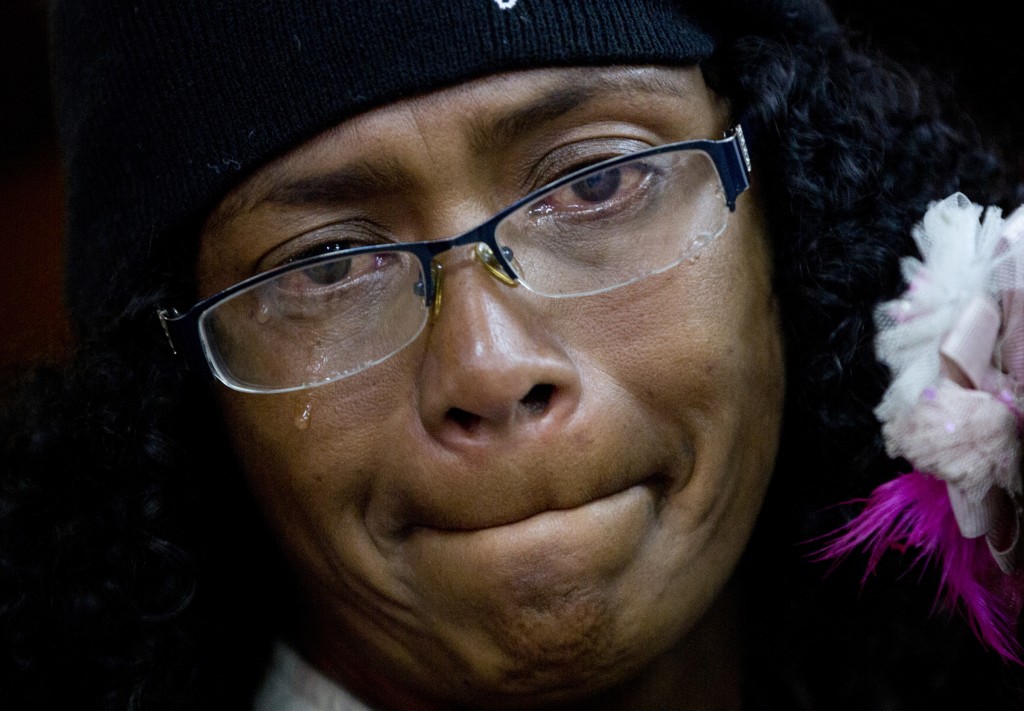 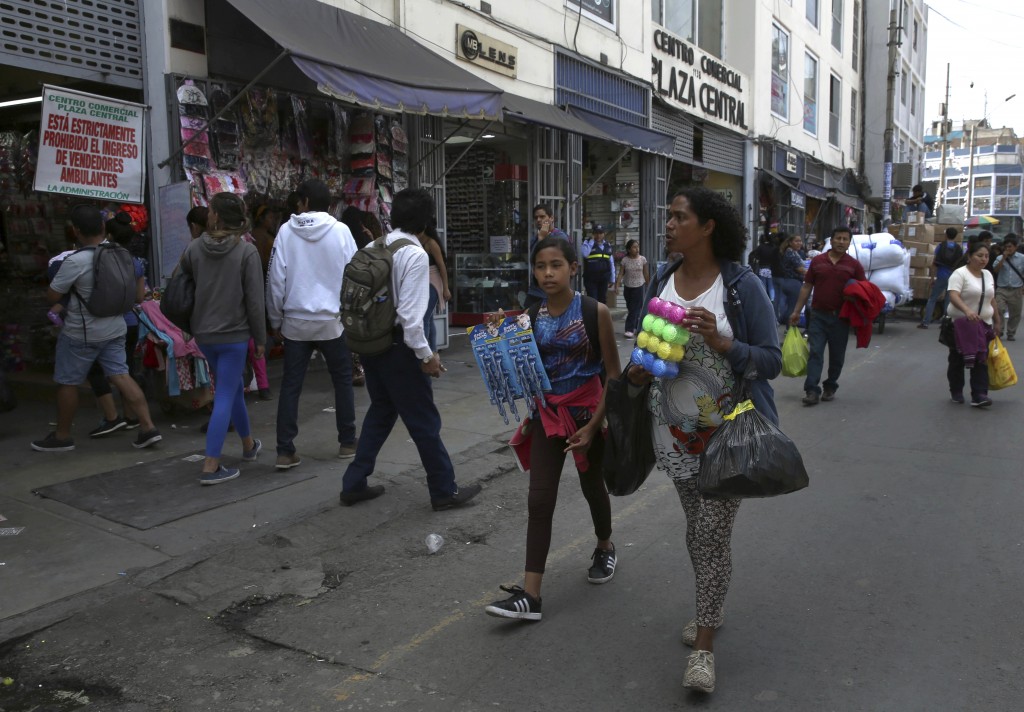 PAMPLONA, Colombia (AP) — As night approached, Sandra Cadiz wrapped her shivering 10-year-old daughter in a blanket and prayed for a ride up the frigid Colombian mountaintop known as "the icebox."

Two days before, the mother and daughter had fled Venezuela on foot for a 2,700-mile trek through four countries to Peru, joining more than 650 migrants who walk out each day because they cannot afford a plane or bus ticket. Cadiz knew not everyone survived the dangerous trek, but she feared staying in Venezuela would mean her already malnourished daughter going hungry.

Now, after five hours of waiting, Cadiz braced herself for a long, cold night sleeping on the ground outside a gas station.

"I am doing this for her," Cadiz, 51, said of her daughter Angelis.

In one of the biggest migrations in the world today, more than 1.9 million people have fled poverty, hunger and crime in Venezuela since 2015 — rivaling the flow of Middle Eastern and African refugees to Europe. Although the toll of this migration is largely invisible, data collected by AP from various agencies found that deaths and disappearances could reach a few thousand, depending on how they are counted.

At least 235 Venezuelans were reported missing in Colombia, Peru and Ecuador over the last two years. Some 334 in Colombia were killed in homicides and accidents, and an unknown number drowned aboard shoddy boats in the Caribbean. Another 2,841 died in Colombia from illnesses like malaria and malnutrition; though it's difficult to know exactly what role migration played, many arrive weakened by the exodus.

"They can't withstand a trip that hard, because the journey is very long," said Carlos Valdes, the head of Colombia's forensic services office. "They don't eat and they die."

The daughter of a housewife and a cemetery worker, Cadiz got pregnant at 15 and dropped out of school. One husband was killed in a robbery, another in a motorcycle accident. Her oldest child died at 25 in a hail of 20 bullets by an unknown killer.

As food became harder to find, Cadiz and her daughter frequently slept outside supermarkets to grab whatever was available when doors opened. Over the summer, her son, his wife and their baby fled on foot to Peru.

When the government announced a bonus to help Venezuelans transition to a new currency with five fewer zeroes, Cadiz saw her chance to buy two bus tickets to the border with Colombia. That night she told Angelis they could spend the money on new shoes, or they could reunite with her brother in Peru.

The trek through Colombia often starts on illegal dirt trails across the border ruled by armed men. Three days before Cadiz and Angelis left, police found the corpse of a 44-year-old father shot five times.

In Cucuta alone, officials have 37 unidentified bodies believed to belong to Venezuelans.

"They die and we don't know who they are," Valdes said.

Cadiz boarded a bus to the Colombian border with her passport — Angelis didn't have one — and a handwritten death certificate for Angelis' father. At the border, they got separated amid a swarm of migrants. A frantic Cadiz finally spotted her daughter on the other side; she had slipped through without being asked to show a passport.

The next day they set off walking toward the Colombian mountain highland known as the Berlin paramo, where temperatures can dip to 10 degrees below freezing. Anny Uribe, who runs a refuge for migrant walkers, said she has heard direct witness accounts of at least 17 people dying in the paramo. Officials could not confirm any deaths but concede they may never have been reported.

Migrant Isaia Alberto Munoz, 34, said he saw a family digging a hole and crying along the side of the road, as they buried someone wrapped in a white blanket with red flowers. His group decided they could not stop to help.

"We couldn't withstand the cold," he said.

Cadiz was terrified she and her daughter would get stranded and die. But after spending the night at the gas station in the freezing cold, they decided to take their chances and walk.

Over five hours later, Alba Camacho and a friend spotted them. The 27-year-old teacher stopped, wrapped Angelis in her own thick blue coat and took the pair to her friend's home for the night, where Cadiz heard Angelis talking in her sleep.

"I don't want to walk anymore!" she cried out.

Early the next morning they set off on foot again, walking and hitching rides, but the progress was agonizingly slow. By the following evening, they were barely a quarter of the way from Venezuela to Peru. They found themselves stranded at a gas station in a remote area known only as "Kilometer 17."

"We're trapped," Cadiz told her son in a WhatsApp voice message. But she had no cell signal, so the cry for help didn't go through.

They spent that night on the floor beneath a mechanic's tin roof. Exhausted, mother and daughter wept.

The next day, Cadiz decided to switch her strategy: She had collected 250,000 pesos - about $82-- from generous Colombians and would use the money to bargain for seats on buses. That day they finally made their way to Cali and then bought two bus tickets to Ecuador.

At the border, a man told Cadiz he'd buy any Venezuelan bolivars she might have. Cadiz took out all that was left of her life savings.

The man offered her fifty cents.

After more than four hours in lines, Cadiz finally reached a migration agent. She stared at Angelis' national identification card and let them through. Cadiz's relief was visible as she smiled for a photo beneath a "Thanks for Visiting Ecuador" sign.

Once across the border, they got on a bus to Peru - provided for free by the Ecuadorean government. Twenty hours later, they emerged hungry and suffering from nausea and indigestion.

Eight days after fleeing Caracas, Angelis and her mother had reached their final border. The next day, Cadiz pulled her documents out of a crinkled Hello Kitty folder one last time. After reviewing them carefully, a migration agent asked Angelis to step in front of a camera. She grinned ear to ear.

"Calm down," the agent told her coldly. "Don't smile."

By the time they reached Lima, they didn't have a cent in their pockets. But they had made it.

"I arrived by a miracle," Cadiz said.