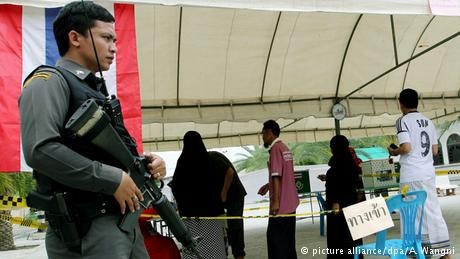 Thailand's ruling military junta declared at the start of October that it was planning to hold the nation's much awaited next parliamentary elections sometime between February and March 2019. This was, however, not the first time it announced its plans for organizing the polls. The junta has so far postponed the election at least four times, saying it has yet to complete political reforms in the country.

But some observers say the generals could be more committed to the time frame this time round. "The Thai people's patience has run out," said Wolfram Schaffar, a political analyst and Thailand expert.

"The repeated postponement of elections has caused a great amount of distrust among Thais. The loss of confidence has now reached such an extent among all sections of Thai society that there can hardly be any justification for postponing the elections once again," Schaffar told DW. There is growing discontent even among sections that have been traditionally close to the military.

When Thailand's military took power in a coup d'état in 2014, it was met with widespread approval. The months-long political power struggle that preceded the military's move had led to administrative paralysis, particularly in the capital Bangkok, which witnessed massive demonstrations between supporters and detractors of the then civilian government headed by PM Yingluck Shinawatra.

So when the military intervened, many people breathed a sigh of relief and hoped it would put an end to the chaos. The junta declared that it wanted to take on the role of an impartial referee who would pacify the situation, end corruption, reform the political system and then return power to the people.

Many observers initially regarded the 2014 coup as no more than another military takeover in Thailand; the Southeast Asian nation has so far experienced 18 military coups since 1932. But the latest one differed considerably from the previous ones, particularly when it comes to how the junta cracked down on dissenting journalists, intellectuals and political opponents.

"The military took over not to repair democracy, but to stay in power indefinitely," said analyst Schaffar. The regime installed by the generals then drafted a new constitution, which was approved in a referendum held in 2016.

In the run-up to the referendum, however, all sorts of restrictions were imposed, including barring any public discussion over the constitution as well as curtailing the freedom of expression, assembly and the press. The constitution led to a weakening of the Thai parliament and strengthened the hand of the prime minister. Thailand now resembles a presidential system.

"The military is now closely intertwined with the country's political bodies and institutions," said Schaffar. "The next elections will not be free and fair. In the end, no party that dislikes the military will actually gain the power to challenge the military."

Reorganization of the party system

Despite the military consolidating its power, it is unclear how it will deal with the election results. Thailand's political landscape has changed considerably over the past four years.

Before the coup, there were two strong political camps: the Pheu Thai party of former PM Thaksin Shinawatra, which has won all the elections since 2001 with help from rural voters, and the Democratic Party (DP), which repeatedly managed to take over power with the support of the royalist elite and the military.

The four years of military rule have changed this system. Now, the military stands above everything and will likely retain its dominant position, albeit outside the party landscape.

Within the party spectrum (more than 50 outfits have registered themselves for the election), the Palang Pracharat party, founded by the military, is considered unattractive by many.

Support for the formerly influential DP has eroded, because it lost its ideological anchor - the monarchy - with the death of the respected King Bhumibol in 2016 and the succession of his little respected son Vajiralongkorn. "This camp is ideologically extremely weakened," said Schaffar.

A brand new edition to the political game is the Future Forward Party, set up by 39-year-old Thanathorn Juangroongruangkit, the scion of Thailand’s biggest autoparts group. The party is supported by intellectuals who have had to flee Thailand since the coup and sections of the so-called Nitirat group. The group consists of jurists, who, among other things, want to reform Thailand's rigid and controversial lese majeste (royal defamation) law, which has been repeatedly exploited to arrest and intimidate political opponents.

The Pheu Thai party of the Shinawatras, whose permanent disempowerment was actually a central goal of the coup, still has many supporters and could secure a strong presence in parliament.

Thai political parties, however, are facing numerous problems in terms of organizing themselves and mobilizing their supporters.

For the past four years, political and party work has suffered from restrictions on freedom of assembly and expression. Until this September, party members weren't allowed to hold conventions or elect their chairpersons. Although these restrictions have been slightly eased since last month, the ban on meetings outside the party conferences is still in place. As a result, there's hardly any election campaign taking place outside the confines of social media.

The only exception is Prime Minister and junta leader, General Prayuth Chan-ocha, who has been busy traveling across the country to address his compatriots in so-called "mobile cabinet meetings."

"It could be the case that Prayuth waits for the elections and then uses the military's influence to remain PM," said Schaffar. "Prayuth is extremely conscious of his status and is highly ambitious. It's unlikely that he don't want to continue as prime minister."

Experts say the key question then will be how the military and the winners of the elections deal with the results at the ballot box. Schaffar pointed out that the following questions will then arise: "Will the military accept a prime minister from parliament? Will Prayuth remain the head of government? Will there be demonstrations? Will the military suppress them?"

"In this regard, the situation in Thailand is in a flux. If the democratic forces consolidate themselves and take some power away from the military, then perhaps that would even be a kind of trend reversal in Southeast Asia," the expert said, noting that the authoritarian style of governance has been on the rise in the region for years.