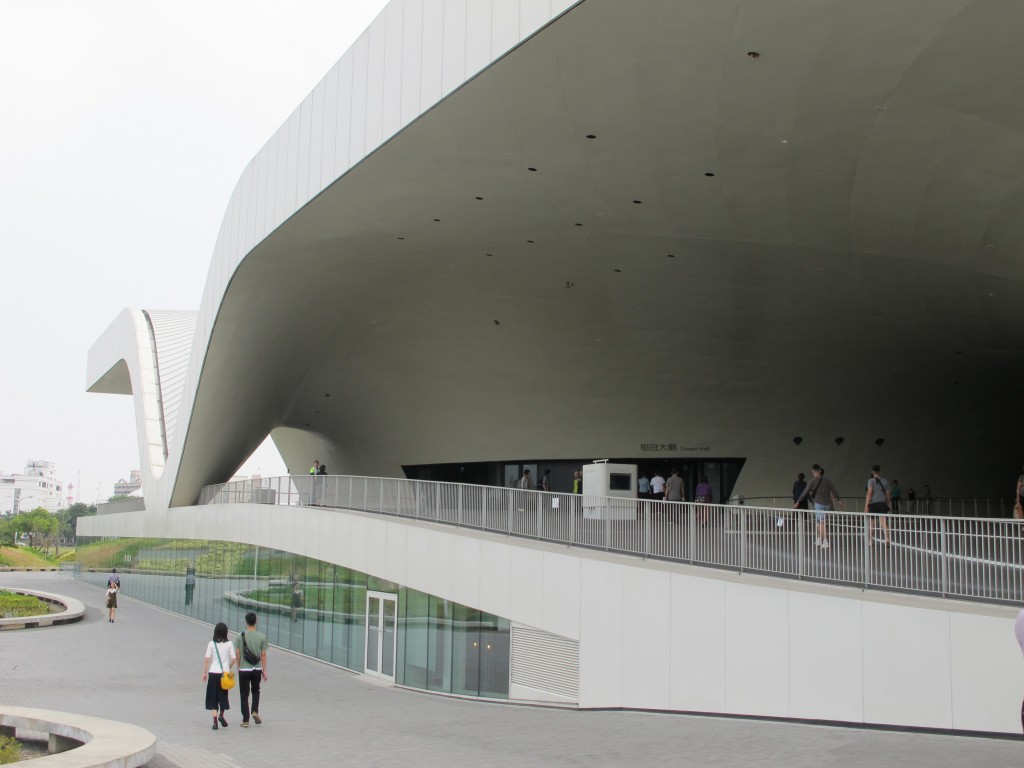 Saturday saw the grand opening of the latest large-scale cultural project in Kaohsiung, the National Kaohsiung Center for the Arts (衛武營國家藝術文化中心).

Situated in Weiwuying Metropolitan Park, on the site of a former military training facility, the new center is actually home to five venues in one complex and boasts a number of unique features no doubt intended to attract visitors.

As well as being the world’s largest single-roof performing arts center, it is also believed to be the largest arts venue in Asia and features the grandest pipe organ in Asia too. Designed and built by the renowned German organ manufacturer Johannes Klais Orgelbau, the organ consists of no fewer than 9,085 pipes and is one of the very few double organs anywhere in the world. To view the organ, you will need to attend an event in the Center’s Concert Hall, a cavernous auditorium which can seat almost 2,000 people and which played host to the Grand Opening Ceremony.

The great and the good of Kaohsiung and the Taiwanese art world were all in attendance for an hour-long concert which also featured speeches by President Tsai Ing-wen (蔡英文) and the architect behind the building, Francine Houben of Dutch firm Mecanoo, who seems to have a monopoly on new buildings in Kaohsiung at the moment having also designed the new Kaohsiung Main Station.

Those present at the opening enjoyed a performance featuring music from three generations of native Taiwanese composers, performed by the National Taiwan Symphony Orchestra and the Kaohsiung Symphony Orchestra, and led by the conductor and new Executive and Artistic Director of the Center, Chien Wen-pin (簡文彬).

It was a performance which certainly showcased the acoustic integrity of the new concert hall, with the highlight being virtuoso performances by Latvian organist Iveta Apkalna (on the new pipe organ) and sheng player Chen Yi-Wei (陳奕維) on the piece Metallic Reed for Sheng and Organ by composer I-Yu Wang (王乙聿).

The inspiration and the vision

In her speech, Houben explained that her design was inspired by the strength and unique appearance of the Banyan Trees which grow around the park and the shelter they provide to locals and animals alike. She has also tried to capture something of the climate and culture of southern Taiwan, speaking warmly about her experiences in the evening when the weather cools and the people come out to eat, shop, and play. A sense of the architect's success in expressing her connections with the surrounding culture is noted in the cavernous public space, known as Banyan Plaza, which is spread out underneath the center. With the initial appearance of something from a sci-fi movie, this open space with rolling floors, curved walls, and winding tunnels and walkways certainly has the potential to draw people in to enjoy the street dancing, tai-chi, and exercise classes which are almost ubiquitous in covered public spaces in Taiwan. There is much fun to be had for skateboarders and roller-bladers here too, while it will inevitably become a mecca for Instagrammers. The focus of President Tsai’s speech was on equitable access to the arts. She described the transformation of this former military site into a public cultural center as being “the fruit of space democratisation” and managed to gloss over the 15 years and many billions of NT$ it has taken to make this project a reality.

She explained how, with the National Performing Arts Center in Taichung, her government has now invested in major cultural venues in northern, central, and southern Taiwan, with Weiwuying completing their mission to bring arts to all the people of Kaohsiung. She also spoke of the new arts corridor in Kaohsiung, with Weiwuying joining the Dadong Arts Centre and the soon-to-be-completed Kaohsiung Maritime Cultural & Pop Music Center to provide Kaohsiung with a spine of world-class cultural centers.

The real focus of the grand opening was the evening event, which was appropriately billed ‘Arts for the People’. This took place in the venue’s outside space, where the center’s roof dips down to ground level to form an amphitheater, with its stage stretching into the park and the Kaohsiung skyline beyond. For this event, the crowd was located in the park, and thousands turned up to enjoy a free event presenting an extravaganza comprising the range of events that the new center will be playing host to in the coming months.

Seated on the ground, they were treated to an amazing spectacle put on by German company Phase7 Performing Arts, a visual arts company who specialize in lighting performances. The centerpiece was a huge representation of a Buddha onto which were projected a series of spectacular laser displays throughout each performance. Between acts, the Buddha came to life with real moving eyes, to the fascination of audience members young and old. While the lengthy and rather unnecessarily political speech by former Kaohsiung Mayor and current Executive Director to the President, Chen Chu (陳菊), was less than welcomed by some, many of the performances were stellar, including 'De-light', a choreographed performance by Taiwanese beatboxer Jimix, a powerful display from the Ten Drum Art Percussion Group, and a violin and contemporary dance piece 'Strange Particles', which saw dancers interacting with the light show to spectacular effect.

Some performances, such as a rather ill-advised mashup of Western and Chinese opera, were less well received, but the highlight was undoubtedly saved for the end when Phase7 created a stunning ‘Dancing Stars’ light display in the sky over the center. It was a mesmerizing finale to an impressive show and certainly sets the bar high for future performances. The question now is whether the center can convert these large crowds which came out for this free performance into paying customers inside the new center.

The initial ten-week program of events is a diverse one, suggesting that those behind the new center are testing the water to see what proves popular with the punters. Unfortunately, ticket prices for most events are steep and might preclude attendance by many working-class Kaohsiung residents, despite all the talk of ‘Arts for the People’ on Saturday.

Optimism was certainly high at this impressive opening ceremony. Whether that interest can be sustained, once this initial swell of publicity has died down, remains to be seen. Nevertheless, whatever happens inside the center, Kaohsiung will continue to be blessed with a powerful piece of modern architecture and a unique new public space that everyone can enjoy.