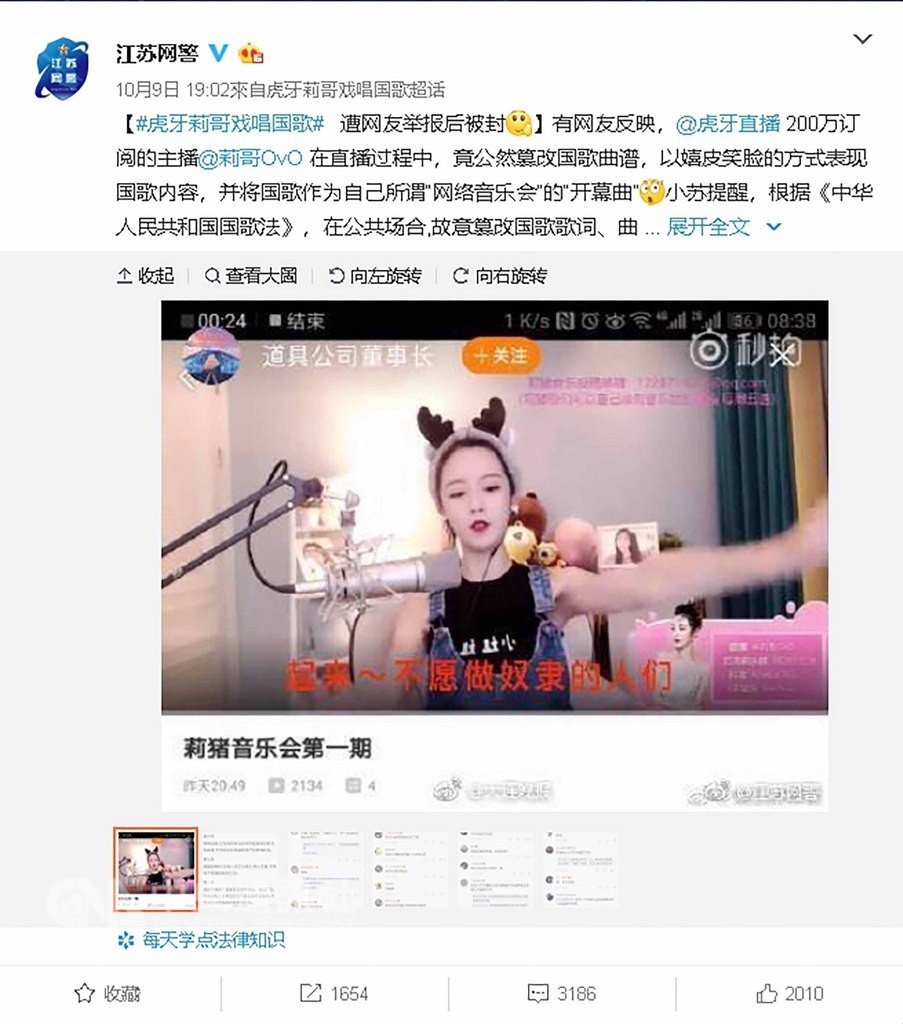 TAIPEI (Taiwan News) — A Chinese social media celebrity with over two million fans on live broadcasting platform HuYa will spend five days in jail after singing a Chinese national anthem in a live video on Oct. 7.

Kaili Yang (楊凱莉), also know affectionately as “Brother Li”, has been arrested for breaking the “National Songs Act” (國歌法) and will be detained for five days, Shanghai police reported today.

According to the video circling the internet, Yang drummed up momentum for her “national anthem” with vocal sound effects, then proceeded to sing, “Stand up, those unwilling to be slaves!” followed by, “Hello! Good evening, comrades!” The video of Yang smiling and singing was reported to authorities by netizens.

The Weibo account for Jiangsu Internet Police (江蘇網警) issued a statement on Oct. 9: “Brother Li distorted the content of the national anthem and pulled faces during the song, using it as an opening number for her online music concert.”

Media reports say HuYa deleted Yang’s video on Oct. 10 and has blocked her account, also removing related content. The star is being subject to education aimed at reforming her behavior.

Yang issued two consecutive apologies on Oct. 9 and 10. She expressed that she felt shame after viewing negative online comments and that her behavior while singing the anthem was “stupid” and “low”. Yang says she is sincerely sorry to both her fans and China for hurting everyone’s feelings and not taking the song seriously.

Shanghai police remarked that online live broadcasts are not extralegal spaces and Chinese laws and morals must still be adhered to online. They claim those violating online laws and public order will be tackled with a firm hand. The police vowed to make sure the internet is kept a clean and safe space for Chinese citizens.

The National Songs Act has been implemented in China since Oct. 1 2017. Those found singing national songs in public and deliberately distorting or falsifying lyrics and music can be detained for up to 15 days, with incidents found to constitute more serious crimes investigated accordingly.