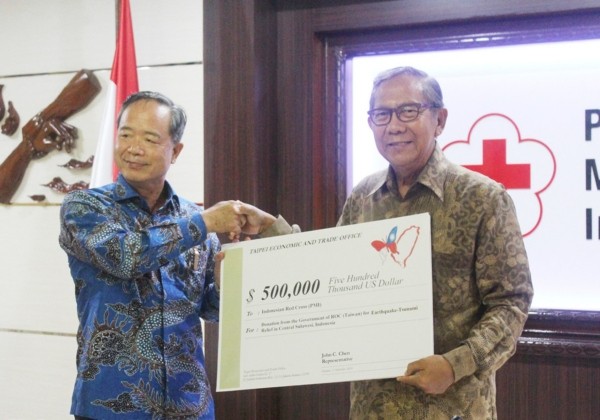 The donation was handed to assist the earthquake and tsunami disaster relief work in Central Sulawesi, as the earthquake struck Palu and Donggala on Sept. 28.

The donation was personally received by Ginandjar Kartasasmita, the acting Chairman of Indonesian Red Cross Society (PMI), and witnessed by Taiwanese businessmen, PMI officials, and some media reporters.

Chen said in his speech that the earthquake that hit Central Sulawesi has caused a huge loss of life as well as property loss, thus the Taiwanese government and citizens have felt a deep sense of grief over this disaster.

Chen hopes the donation can help the victims in Central Sulawesi to get back to their normal life as soon as possible, also help the region's recovery.

Ginandjar, as stated by CNA, said that the road infrastructure in Palu was destroyed in the earthquake disaster, and makes it difficult for the help and supplies from outside to enter the disaster area.

He added that the local community is in a devastating condition, since a lot of people lost the family members in the disasters, and victims are still looking for family members that have not been found yet. In addition, Indonesian Red Cross Society will establish a shelter in the disaster area to assist the victims until they found a new place to stay.

As for the donation from Taiwan, Ginandjar said that this is the third time Taiwan gives donation to Indonesia recently. Previously, Taiwan also donated US$250,000 (NT$7,745,000) after earthquake hit Lombok Island in July this year. Ginandjar said he feels very grateful to have received the help from Taiwan, and added that Taiwan has had a good relationship with Indonesia for a long period of time.