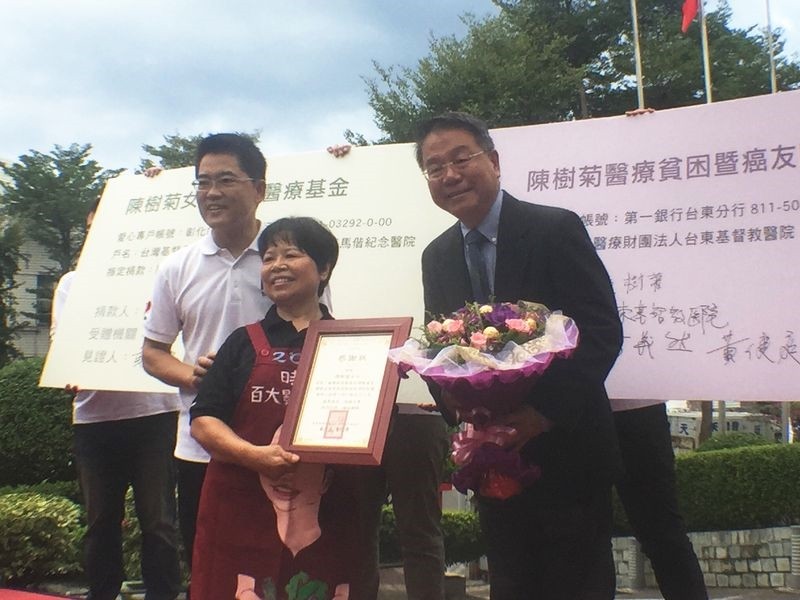 Renowned philanthropic vendor Chen Shu-chu (陳樹菊), who sold vegetables in eastern Taiwan's Taitung for more than half a century, on Wednesday donated two insurance policies worth a total of NT$16 million (US$516,500) to local hospitals to foster the provision of rural health care services.

Chen designated Taitung MacKay Memorial Hospital and Taitung Christian Hospital as the beneficiaries of the policies, which are currently worth NT$7.7 million and NT$8.3 million, respectively.

The donations were made during a flag raising ceremony held by Taitung County government to celebrate Double Ten National Day.

The hospitals will receive the donations, which Chen has stipulated should be mainly used to treat cancer patients and provide the poor with proper medical care, after she passes away.

Chen, who retired earlier this year, said she was fine with a place to live and savings to live on after retirement, adding that she did not hesitate to make the donations as the money she earned throughout her life also came from people in Taitung.

Money comes and goes, Chen said, adding that it is the way it is supposed to be as she was born with nothing and should naturally leave this world in the same manner.

Chen, now in her late 60s, became a household name across Taiwan after her good deeds were brought to light by foreign and local media.

She was honored as one of the 100 most influential figures by Time Magazine in 2010 for contributing over NT$10 million to different charitable causes. In the same year, she was also named one of 48 heroes of philanthropy by Forbes Asia.

In 2012, Chen was one of six winners of the Ramon Magsaysay Award for helping the poor, receiving a US$50,000 cash prize, which she donated to Taitung MacKay Memorial Hospital.

Chen's mother died during childbirth when she was at elementary school because her family was unable to afford hospital care. To help her father raise her younger siblings, Chen started to sell vegetables at the family stand at the age of 13.