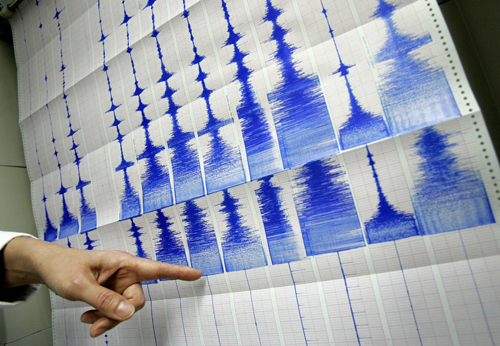 Two strong earthquakes, measuring 6.7 and 6.4 respectively on the Richter scale, rocked southern Taiwan last night, sending panicked residents in the southern cities running into the streets.
Local media reported several buildings in Hengchun and other townships in the southern area of Pingtung collapsed.
An estimated up to 20 people were trapped in various buildings around the county according to some media reports. A mother and her twins were reported trapped in Hengchun, with one of the children later being rescued and sent immediately to a hospital.
In Kenting, seven people were trapped in their collapsed furniture store as of press time, reported local news media.
According to local television news stations, six people were rescued and 27 were injured and sent to the hospital. However, a 30-year man died upon arrival at the hospital.
Many streets in the city were cracked and a major bridge was damaged, the reports said. Several fires broke out in the area, apparently caused by downed electric power cables.
One building in Hengchun was engulfed in fires last night as firefighters rushed to the scene trying to put out the blaze. One cable news station reported there were still people in that building, but it was not clear how many.
In both Taipei City and County, residents could feel a prolonged rocking of their buildings.
The temblors occurred on the second anniversary of a massive earthquake and tsunami that killed more than 200,000 people in southern Asia.
The Central Weather Bureau (中央氣象局) reported 14 aftershocks after the second earthquake which occurred at 8:34 p.m., eight minutes after the first jolt was felt islandwide.
CWB Seismological Center Deputy Director Lu Pei-ling said magnitude of the earthquake was 5 in Hengchun, the southern tip of the island, 4 on the west coast south of Changhua County in central Taiwan, the offshore island of Penghu (The Pescadores), and southeastern Taiwan, 3 in eastern and northeastern Taiwan, and in Taichung City in central Taiwan, 2 in Taipei City, Taoyuan and Miaoli Counties in northern Taiwan, and 1 in north of Hsinchu City and some other parts in northern Taiwan.
The epicenter of the first quake was about 22.8 kilometers off Hengchun at a depth of 21.9 kilometers, and the second one was 21.3 kilometers under the sea off Hengchun, Lu said.
Phone services were cut in southern Taiwan from Kaohsiung to Pingtung after the quakes occurred, but were restored shortly after.
Shortly after the earthquakes were reported, Japan's Meteorological Bureau said a one-meter-high tsunami was headed toward the eastern coast of the Philippines.
However, the Hawaii-based Pacific Tsunami Warning Center said there was no threat of a destructive Pacific-wide tsunami, based on historical earthquake and tsunami data. Japanese seismologists later also lifted the warning.
Earthquakes occur frequently in Taiwan, which lies on a seismically active stretch of the Pacific basin. Most of the quakes are minor and cause little or no damage. But a magnitude-7.6 earthquake in central Taiwan on September 21, 1999, killed more than 2,400 people and left many others injured or homeless.