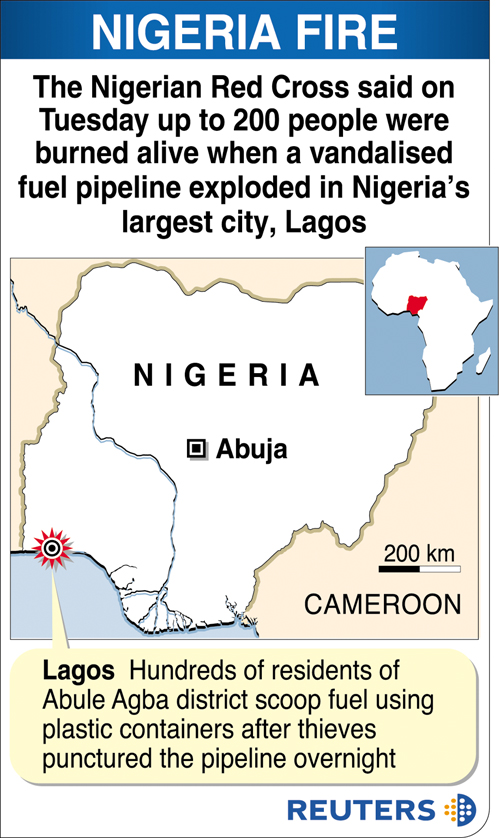 A ruptured gasoline pipeline burst into flames yesterday as scavengers collected the fuel, leaving at least 200 people dead as rescue workers tried to document more charred corpses lying at the scene.
Hundreds of bodies could be seen jumbled and fused together in the raging flames at the blast site. Intense heat kept rescue workers back as smoke billowed over the heavily populated Adule Egba neighborhood.
A senior official for the Nigerian Red Cross, Ige Oladimeji, said his workers had documented "over 200 and still counting."
"We can only recognize them through the skulls, the bodies are scattered over the ground," said Oladimeji. Workers "can't get close enough because the fire is still burning."
Witnesses said the rupture on the gasoline pipeline came shortly after midnight, with scavengers collecting the fuel in plastic jerry cans for hours before the puddles of collected petrol caught fire after dawn.
It wasn't clear what caused the rupture or ignition of the spilled fuel.
Nigerians often tap into pipelines carrying refined fuel, scooping up the raw product in buckets or plastic bags. Spilled fuel spreading in pools sometimes ignites, immolating people nearby.
In May, more than 150 people died in a similar explosion in Lagos.
Nigeria is Africa's largest oil producer, but corruption, poor management and limited refining capacity often leaves the country short of fuel for vehicles and stoves. Shortages in recent days have prompted hours-long lines at Lagos filling stations.