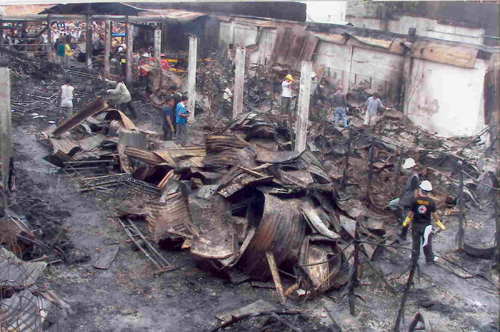 A fire that was blamed on illegally sold firecrackers which were set off swept through a department store in the central Philippines on Christmas Day, killing 24 people who tried to escape in a restroom, police reported yesterday.
The blaze spread quickly from firecrackers and pyrotechnics that ignited near the entrance door of the one-story building in Ormoc city, 550 kilometers southeast of Manila, leaving many vendors and customers trapped inside, said Chief Superintendent Eliseo dela Paz.
He said people who were near the entrance managed to escape but others were forced to go deeper into a restroom, where 23 charred remains were found.
The people killed in the fire included customers, vendors and store employees.
Another person died of injuries overnight and 15 were treated in two Ormoc hospitals. Two of them are in critical condition, acting provincial police director Senior Superintendent Manuel Cobillo said.
Dela Paz said the exit door in the back of the store was padlocked, blocking the escape route.
He said the store did not have a permit to sell firecrackers and that police had cracked down on dealers selling fireworks inside malls and stores in order to prevent accidents.
"But they put up some displays in the afternoon," dela Paz told The Associated Press by telephone. "Apparently that's where the fire started."
He said police currently were looking for the owner but could not locate him.
Many stores and malls throughout the predominantly Christian Philippines were open on Christmas Day, a public holiday, giving families a chance for last-minute shopping as well as recreation.
The use of firecrackers and other pyrotechnics are extremely popular during the holidays in the Philippines, and accidents are common despite efforts to minimize reckless celebrations.