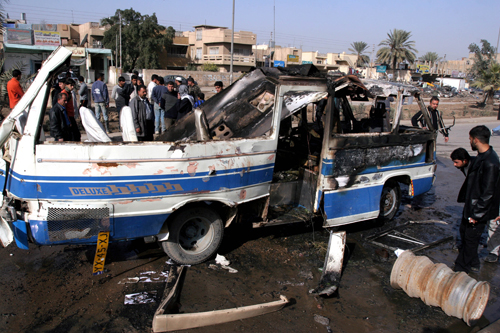 Six more American soldiers were killed in Iraq, officials said Tuesday, pushing the U.S. military death toll to at least 2,978 - five more than the number killed in the September 11, 2001, attacks in the United States.
Three car bombs killed at least 25 people and wounded 55 in a commercial area and public transport hub in western Baghdad yesterday morning, a doctor at Yarmouk hospital said on condition of anonymity. Two roadside bombs targeted an Iraqi police patrol in an eastern neighborhood of the capital, killing four policemen.
The U.S. military announced the deaths of three soldiers on Monday and three on Tuesday in bombings near the Iraqi capital. The deaths raised the number of troops killed to 2,978 since the beginning of the Iraq war in March 2003, according to an Associated Press count. The figure includes at least seven military civilians. The September 11, 2001, attacks claimed 2,973 victims in New York, Washington and Pennsylvania.
Of the total U.S. military toll, at least 2,377 died as a result of hostile action, according to the military.
The U.S. military said it killed three insurgents in an exchange of fire near Samsiyah in western Iraq. Troops discovered rocket-propelled grenade launchers, assault rifles and mine components at the scene, the military said.
British soldiers said they were on alert for reprisals a day after they raided a police station in the southern city of Basra, killing seven gunmen in an effort to stop renegade Iraqi officers from executing their prisoners.
"We fully expect more attacks on our bases and on Basra stations, but that's nothing out of the ordinary," Major Charlie Burbridge, a military spokesman, said Tuesday. "But this is part of a long-term rehabilitation of the Iraqi police service, to make it more effective and more accountable, and ultimately provide better security for the people of Basra."
After the British stormed the police station, they removed 127 prisoners, who showed evidence of torture, then evacuated the building before blowing it up, he said.
Burbridge previously said only 76 prisoners were in the station, but later said soldiers miscounted the prisoners because the operation was done under cover of darkness. Some 800 of the British military's 7,200 troops in Iraq were involved in the operation.
A spokesman for Iraq's defense minister said Monday that the Iraqi interior and defense ministries approved the Basra operation, but some members of the Basra provincial council said they were not notified.
"We object to the way the operation was conducted," council member Hakim al-Maiyahi said. "There was no need to bring in such a huge number of forces and break down the station."
Burbridge said British officials had alerted the provincial governor, Mohammed al-Waili, and that he had approved the operation. "He told us it was the right thing - the way forward. He supported our activity," Burbridge said.
Al-Waili refused to comment.
More violence
In another sign of lawlessness in Basra, gunmen on Monday robbed US$740,000 from a bank about half a mile from the raided police station.
In Baghdad, police found 40 bodies Monday, apparent victims of sectarian violence. A car bomb exploded beside a market and a suicide bomber struck a bus in separate attacks Monday that killed 14 civilians and wounded at least 33.
Meanwhile, Iraqi police yesterday denounced a film of al-Qaida militants staging a walkabout in the northern city of Mosul as a propaganda stunt and insisted that they remained in control of the area.
A video of masked al-Qaida fighters parading armed in an Iraqi street and distributing leaflets issued in the name of their self-declared "Islamic State of Iraq" was this week e-mailed anonymously to new agencies, including AFP.
Some Arabic satellite stations broadcast the footage.
"These propaganda images were filmed in small alleyways of Mosul for only a few minutes," said Brigadier General Abdelkarim Khalaf al-Jaburi, the Iraqi police's director of operations in Mosul.
"Afterwards these images were distributed, but they do not reflect the situation in the city. The number of al-Qaida elements in Mosul is very limited and confined to the outskirts of town," he said.
U.S. military rejects claim
The U.S. military, which has troops in Mosul supporting Iraqi government forces, also dismissed the footage as an attempt to mislead television viewers.
"The local and national governments of Iraq are in control in Mosul and Multinational Force Iraq continues to support their progress," said U.S. spokesman Lieutenant Colonel Chris Garver.
"Any claim by al-Qaida that they are in control in Mosul appears to be an attempt to use propaganda to reverse the sustained successes Iraqi and MNF-I forces continue to demonstrate against al-Qaida in Iraq," he added.
In another sign of escalating diplomatic tensions between the U.S. and Iran, the White House said Monday that U.S. troops in Iraq detained at least two Iranians and released two others who had diplomatic immunity.
U.S. officials have charged that Iran provides training and other aid to Shiite militias in Iraq - including the equipment used to build roadside bombs. The Tehran regime says it only has political and religious links with Iraqi Shiites.
In Baghdad, a spokesman for Iraqi President Jalal Talabani confirmed that U.S. troops had detained two Iranians who were in Iraq at his invitation.