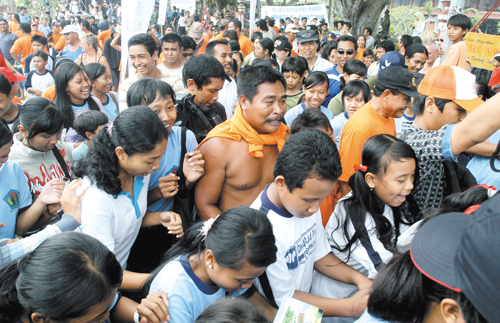 Thousands of people fled beaches in one of Indonesia's largest-ever tsunami drills yesterday, kicking off remembrances across Asia two years after the devastating waves of a large tsunami into coastlines and killed 230,000 people.
Elsewhere, survivors and mourners marked the anniversary by visiting mass graves, lighting candles along beaches, observing a moment of silence and erecting warning towers in hopes of saving lives in the future. Some volunteers were replanting mangroves, saying they were key to protecting coastal communities.
The magnitude 9.0 earthquake that ripped apart the ocean floor off Indonesia's Sumatra island on December 26, 2004 spawned giant waves that fanned out across the Indian Ocean at jetliner speeds, killing people in a dozen countries and leaving millions homeless.
Entire villages were swept to sea in Indonesia and Sri Lanka, luxury resorts and fishing communities submerged in Thailand and thousands of homes destroyed in southern India - where commemorations were small and subdued.
A dozen fishermen watched gulls circle overhead in one hard-hit hamlet early yesterday, staring at the sea and telling stories about villagers who died. Hundreds more gathered as the day went on, some throwing flowers into the water as others lit camphor sticks.