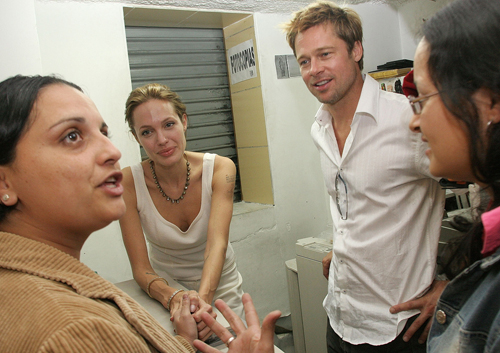 Bragelina spends holiday with refugees
SAN JOSE, Costa Rica
Angelina Jolie and her boyfriend Brad Pitt spent Christmas Day with Colombian refugees in Costa Rica, as part of the actress' work as a goodwill ambassador for the United Nations High Commissioner for Refugees.
Jolie and Pitt arrived Monday and visited a group of refugee children and families and to meet Costa Rican officials, the refugee agency, known as the UNHCR, said in a statement. There are about 11,500 refugees in this Central American country, most of whom fled Colombia because of the conflict there between leftist guerrillas, soldiers and paramilitary forces.
"My Christmas message to Colombian refugees and to the millions of displaced people in Colombia is that the world has not totally forgotten them," the actress said in a statement released by the UNHCR.
Global warming
NEW YORK, New York
Warming ocean temperatures in the Atlantic and Pacific Oceans contributed to the wildfires that burned 9.8 million acres in the U.S. this year, according to a study in the Proceedings of the National Academy of Sciences.
Periods of warm ocean temperatures can change rainfall patterns and cause droughts in the U.S. Southwest, according to the study led by researchers in Argentina. Dry leaves and grass easily catch fire, causing more wildfires during these times.
The research suggests that global warming may be worsening droughts, which occur because of because of weather events such as El Nino, and may be creating a longer wildfire season that is harmful to the environment, according to the study.
"These broad-scale climate trends do not bode well for ecosystems and human communities at risk from increasing wildfire hazards in the western U.S.," the researchers said.
Jackson files suit
LOS ANGELES, California
Michael Jackson is suing his former accountants, claiming they withdrew US$2.5 million a year from his bank accounts but did not properly pay his bills.
The lawsuit by Jackson and MJJ Productions Inc. was filed Thursday in Los Angeles Superior Court against Bernstein, Fox, Whitman, Goldman & Sloan, alleging negligence and breach of fiduciary duty.
The lawsuit asks for unspecified damages and for an accounting of money the defendants received for services.
Jackson hired the Los Angeles-based firm in 2003 for bookkeeping, opening bank accounts and filing personal, corporate and real estate taxes, the lawsuit stated.
However, Jackson alleges the accountants hired people and entered into contracts on his behalf without getting his permission.
The accountants also did not communicate directly with Jackson or keep him apprised of his financial affairs, according to the lawsuit.
The Snowzilla
ANCHORAGE, Alaska
Snowzilla the snowman is back - bigger than ever.
The original Snowzilla towered 4.8 meters over Billy Powers' yard in his east Anchorage neighborhood last winter. Now with snow piling up over the past week, Powers is resurrecting the giant figure, supersized.
This time he expects it to tower about 7.5 meters, top hat and all, he said Monday.
"It's a work in progress," said Powers. He expects to complete Snowzilla II by Tuesday.
Last year's version, with Alaskan Amber beer bottles for eyes, drew scores of photo-snapping crowds and TV crews from Japan and Russia before it melted in the spring.