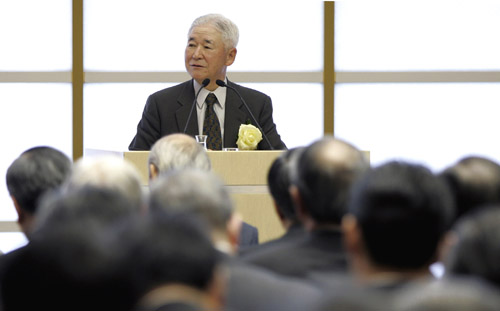 Japan yesterday heard mixed economic news for November, with unemployment falling and consumer prices rising even as the recovery still failed to generate increased household spending.
Analysts said the data confirmed that Japan's economic recovery was intact but that consumption figures were not robust enough to lead the Bank of Japan to hike super-low interest rates next month.
The jobless rate fell to 4.0 percent in November from 4.1 percent in October. When calculated to two decimal points, November's 3.99 percent is the lowest since March 1998, the Ministry of Internal Affairs and Communications said.
The total number of unemployed was down by 330,000 from a year earlier to 2.59 million, the 12th consecutive monthly fall, the ministry said.
The unemployment rate is watched closely for evidence of new hiring by Japanese companies and the positive knock-on effects on consumer spending.
But spending by households in November dropped 0.7 percent from a year earlier, declining for the 11th straight month - although by less than the 1.5 percent fall expected by the market.
"Although the fall in the unemployment rate was a good thing, what is wanted for the recovery is (increased) consumption through rising salaries," said Hirokata Kusaba, an economist at Mizuho Research Institute.
Japan, which for years was beset by stagnant growth and on-off recessions, is now in the midst of its longest sustained expansion since World War II, the government confirmed on Monday.
But whether the recovery is trickling down has become a growing political concern - both for voters alarmed by income disparity and policymakers hoping to sustain current growth rates.
"It is clear that Japanese companies are feeling the increased need for new workers amid buoyant global demand for their products, resulting in a decline in the jobless rate," Daiwa Institute of Research senior economist Junichi Makino said.
"But because more and more firms are now taking advantage of temporary (workers) in dealing with labor shortages, wage levels do not rise so sharply, thereby keeping a lid on private consumption," he said.
Noriko Hama, a professor of macro-economics at Doshisha University in Kyoto, said consumption was hurt not only by the income divide but by the decline in Japan's population.
"Now every Japanese home has about three flat-screen TVs, microwaves and computers," she joked. "So you don't really get a mass boom. Consumption is pretty much saturated and the population is getting older."
The Bank of Japan last week kept its benchmark borrowing rate at 0.25 percent, with Governor Toshihiko Fukui, who had earlier been more hawkish, acknowledging that recent data had disappointed.
The central bank last raised interest rates in July when it ended its unorthodox five-year policy of keeping borrowing costs at effectively zero to battle the scourge of deflation.
Other data out Tuesday showed that core consumer prices rose by 0.2 percent in November from a year earlier, in line with the market expectations.
Excluding energy, however, core prices were down 0.2 percent, underscoring the extent to which high oil prices have been behind the nascent inflation.
"In terms of consumer prices, factors that pushed up the index are chiefly the halt in falling prices of processed foods and the year earlier fall in prices of mobile phone handsets. Thus it is hard to say prices are on a firm rising trend," said Kusaba of the Mizuho Research Institute.
Taro Saito, economist at NLI Research Institute agreed, saying he doubted the Bank of Japan would hike rates at its January 17-18 policy board meeting.
The market concurred, with the benchmark Nikkei-225 index rising 0.45 percent, coming after early lows on declining expectations of an interest rate hike, dealers said.