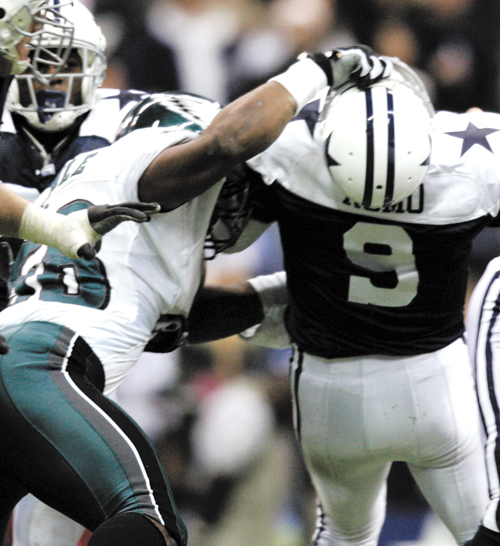 When Monday, November 27 dawned, it was cool but not cold, breezy but not really windy. The morning after the Eagles' season hit bottom was temperate, then. Quiet.
And Andy Reid said, "If everybody . . . ups their game a notch - there's a very fine line between winning and losing in the NFL. If everybody takes care of their job and does the right thing then you can get it changed."
And blah, blah, blah. Reid's team had just been eviscerated by the Indianapolis Colts. It had lost five games out of six. The whole thing was nearly gone. Still, he cliched on.
"We were not playing good football in the slightest," Eagles owner Jeffrey Lurie said. "Let's face it: We were playing poor football. I think you are what you play and we were a poor football team after Indianapolis. That's the reality. I thought we had the potential to be a very good team, yes, because the players are the players. But you are what you are."
Lurie stood in the Eagles' locker room at Texas Stadium on Monday night as he spoke, the final score - Eagles 23, Cowboys 7 - still mocking the realities of the previous month. Reid's reeling, rocked football team is now 9-6 and leading the NFC East with one game to play. A playoff berth is secured after four straight wins. Another win gains them a home playoff game. Their destiny, once so painfully obvious, remains delightfully undefined.
Now people are talking about how this could be Reid's best coaching job. That is not true, not yet - the man has been to a Super Bowl and four conference championship games, after all, and once went 13-1 in a season before resting his starters.
Still, this might be Reid's most revealing coaching job - because this is the one where he gave up some control to offensive coordinator Marty Mornhinweg, and this is the one where he bit his lip and made the decision to trust his players - even after seeing them collapse in the previous season under the pressure of Terrell Owens, even after seeing the whole thing begin to circle the drain again.
"When it was going really bad, I think the players looked around at themselves more than they looked for Andy to do something," tight end L.J. Smith said. "Just because of the fact that, when that whole T.O. situation went down, we looked to Andy: 'Andy, what are you going to do, what's going on, how are we going to handle the situation?' What we took from that was, it's our team. It's our team.
"He can't come out there and play. Coaches have to make the calls and we have to go out there and execute. We just took it upon ourselves and said, 'It's our team. Let's make it about us.'"
The whole thing has been kind of subtle. The play-calling thing had been coming in fits and starts since last season before Reid handed it over completely to Mornhinweg after the bye week this season. The trusting of the players, too, is something that Reid has always tried to do, despite the notion that he is Czar Andy.
He loves the idea that he has built a great, strong structure. He saw T.O. knock it down and it had to be sobering. Then he saw the losing begin and he wouldn't be human if he didn't wonder. I wrote then and I'll write now: When he starts to abandon the cliches, and the structure, you'll know that he's really worried.
But he never did. He gave his players off for the bye week, even after losing three straight games. He sang the same old song, even after Indianapolis.
Smith, the veteran of good and bad times, calls Reid, "Just steady, man. Not really flinching." Wide receiver Donte Stallworth, new to the whole thing, calls his coach "a laid-back California guy" and says he has been true to his personality.
It is what we all have come to expect after 8 years. Still, this year, you wondered. They wouldn't run the ball and they couldn't stop the run and now they are the mirror image of their bad old selves.
You look for an explanation for the turnaround and Reid says, "I don't know - don't tell anybody," going for the laugh line. He also says that they hadn't accomplished anything yet, which is what they all dutifully repeated, from the owner on down.
And so, as it turns out, some things never change around Andy Reid's team, even after everything (including Indianapolis).
Jets spear the fish
It wasn't always pretty - unless you're a fan of stifling defense. It was often soaking wet. It was very careful. It was full of punts.
For much of Christmas night, it was virtually point-less.
But for the Jets, the point was to just win, baby. And they did exactly that by 13-10 over their old AFC East foes, the Dolphins. And now in their first season under Eric Mangini, they will play for their fourth playoff berth in six years.
The Jets (9-6) overcame adversity and the Dolphins (6-9) on the strength of two more highlight-video catches, one by wide receiver Jerricho Cotchery and the second by rookie running back Leon Washington, plus the first winning field goal of kicker Mike Nugent's career to post their latest Monday Night Miracle.
A home win over the hapless Raiders on Sunday will clinch the playoff berth that very few outside the Jets thought possible back in September, or July, or February when Mangini took over the team.
"There were a lot of things we had to overcome, and we did it together," Mangini said. "I'm proud of them."