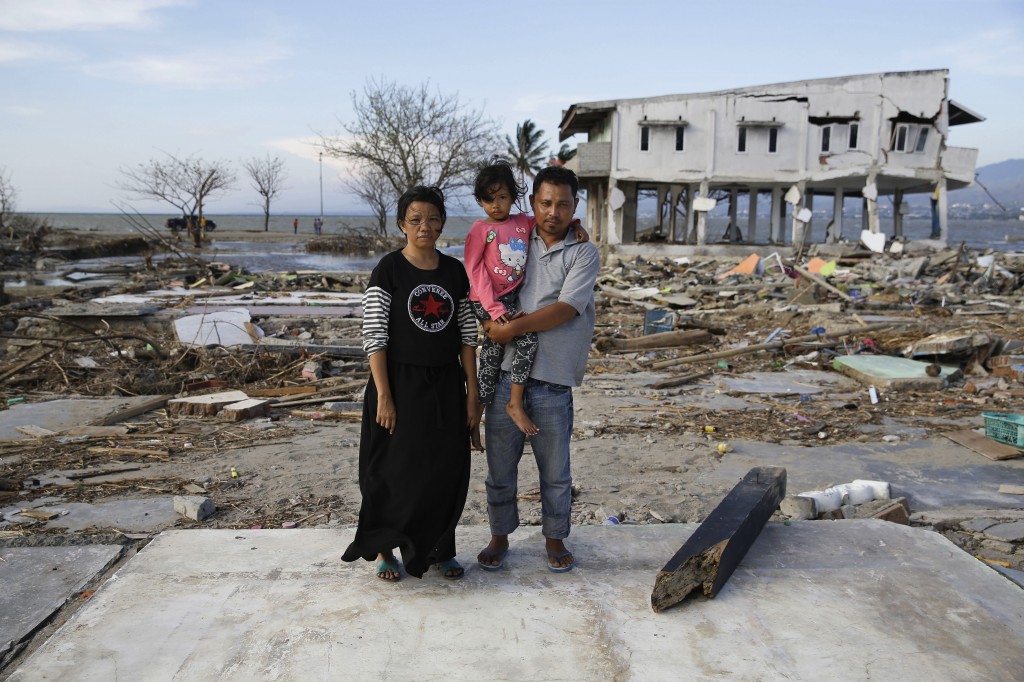 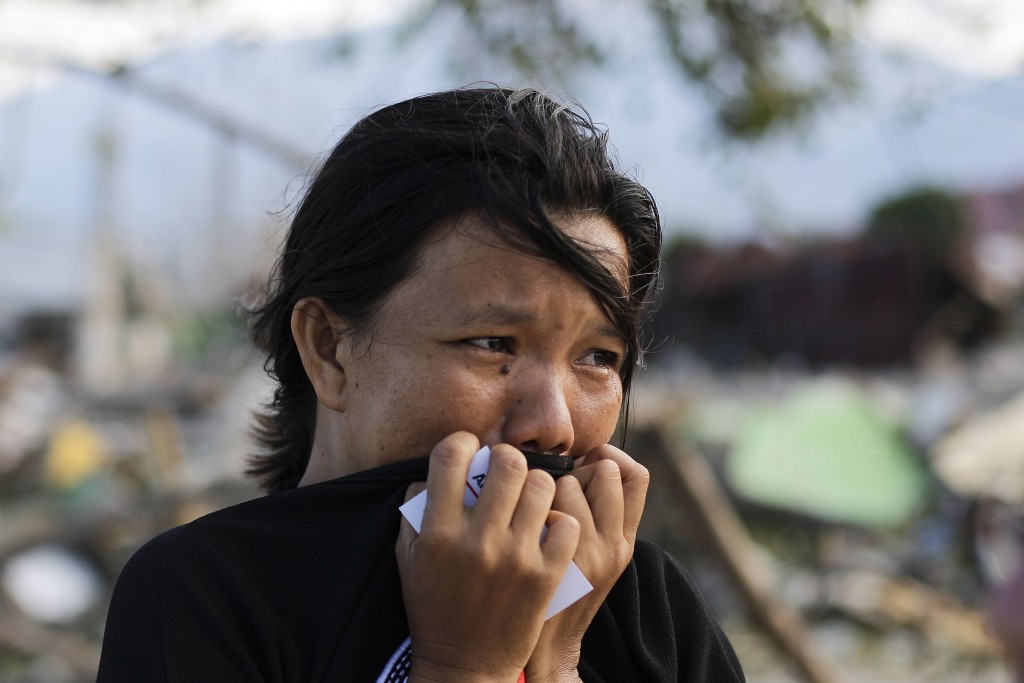 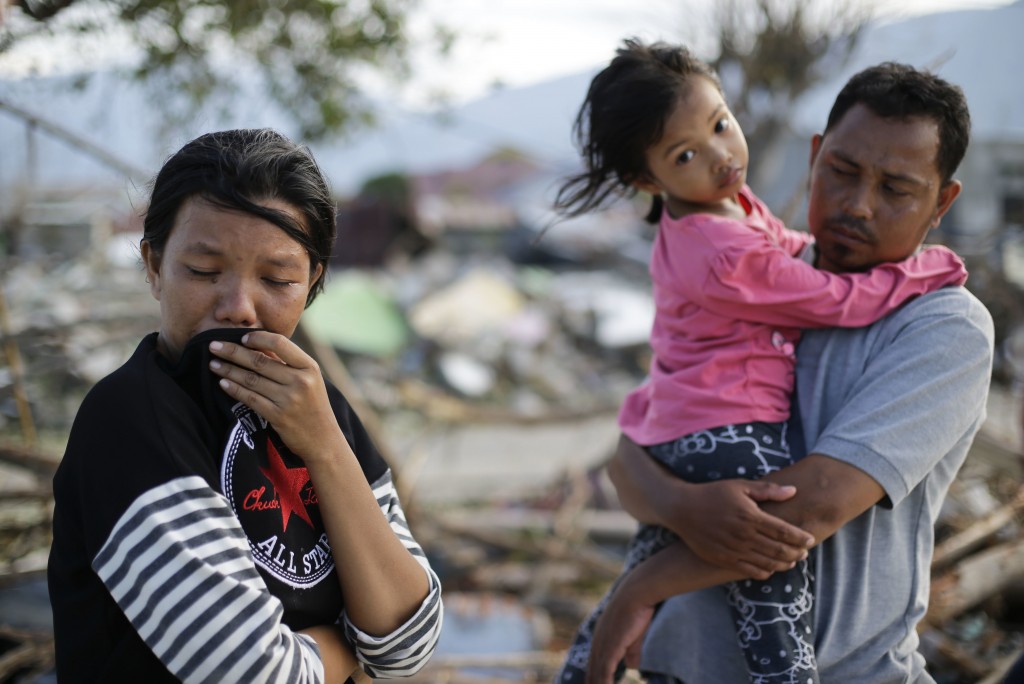 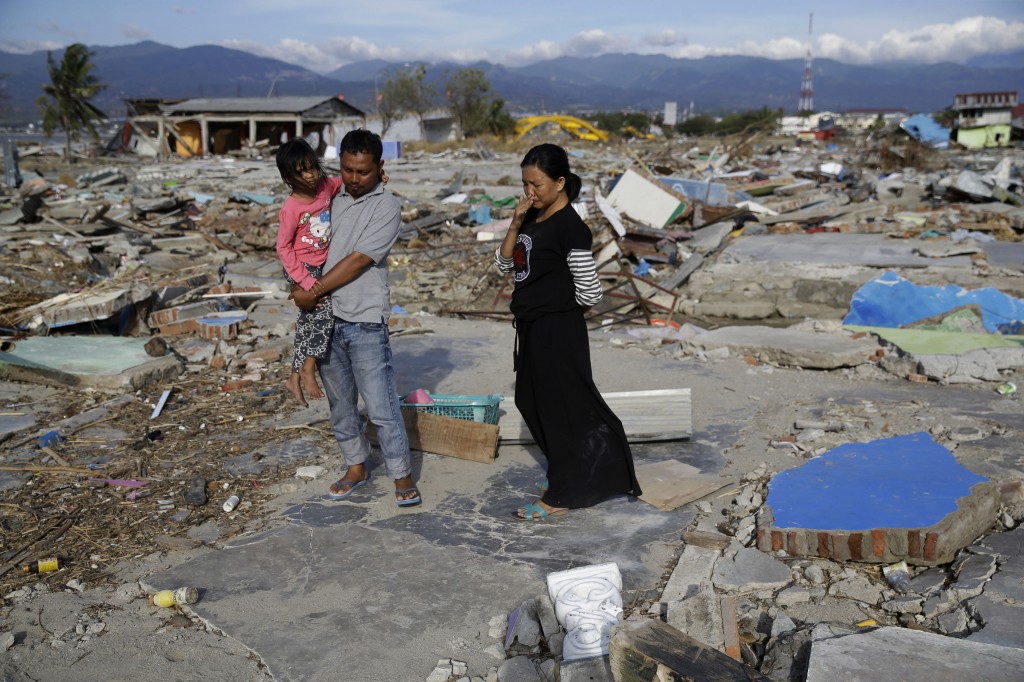 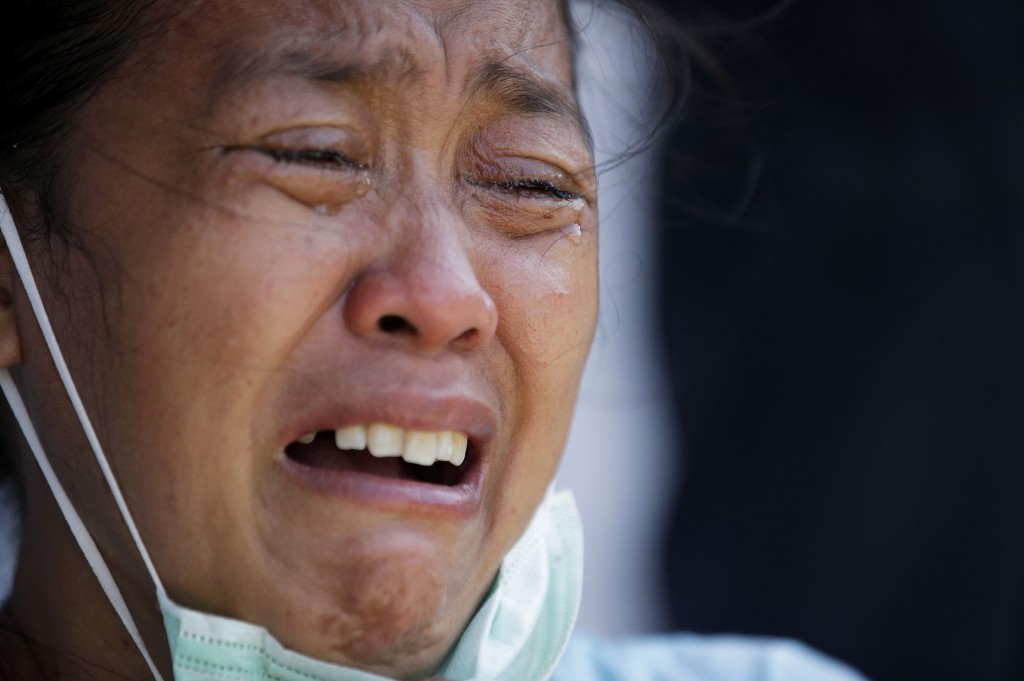 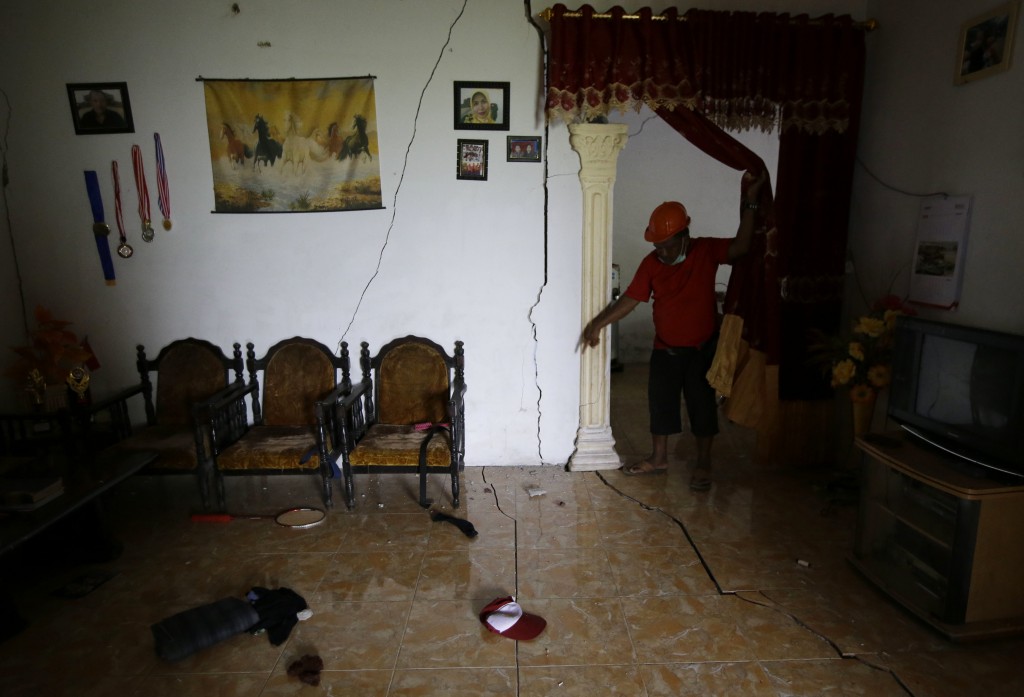 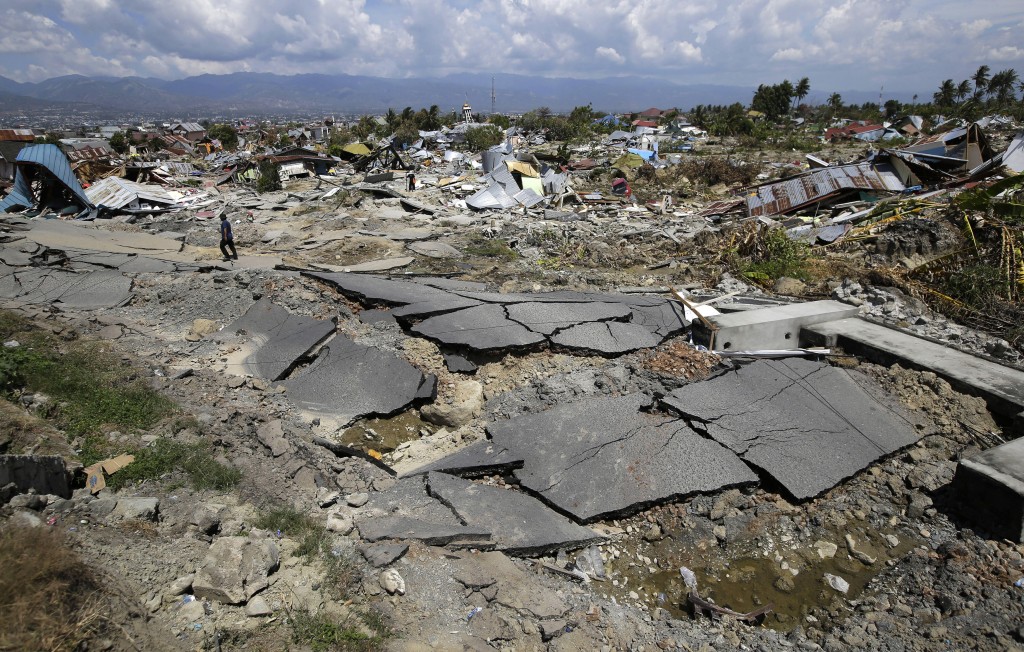 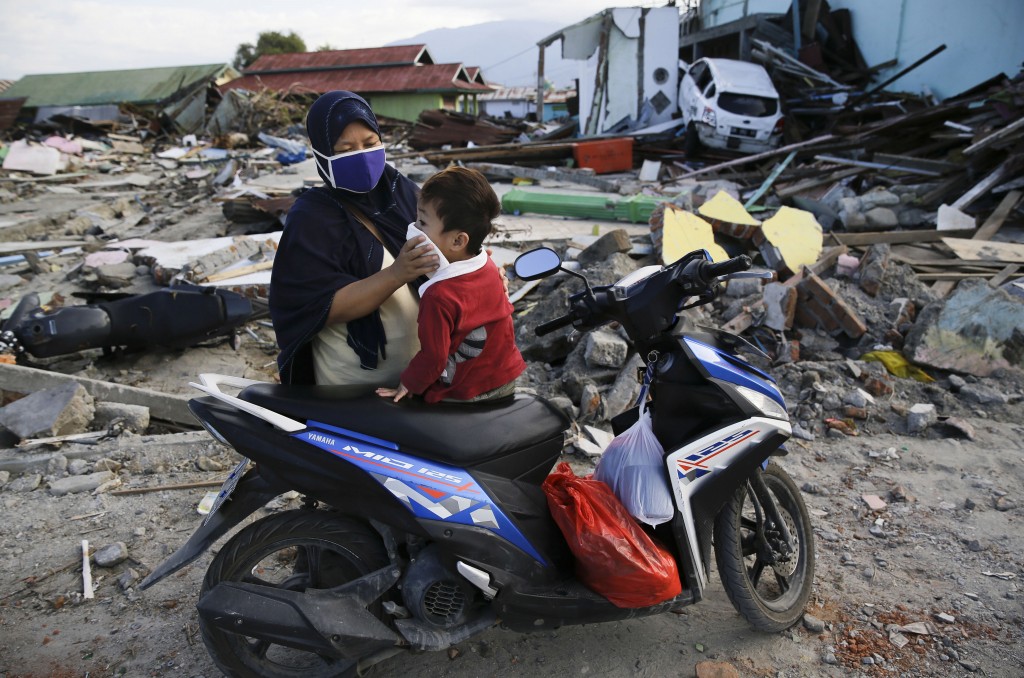 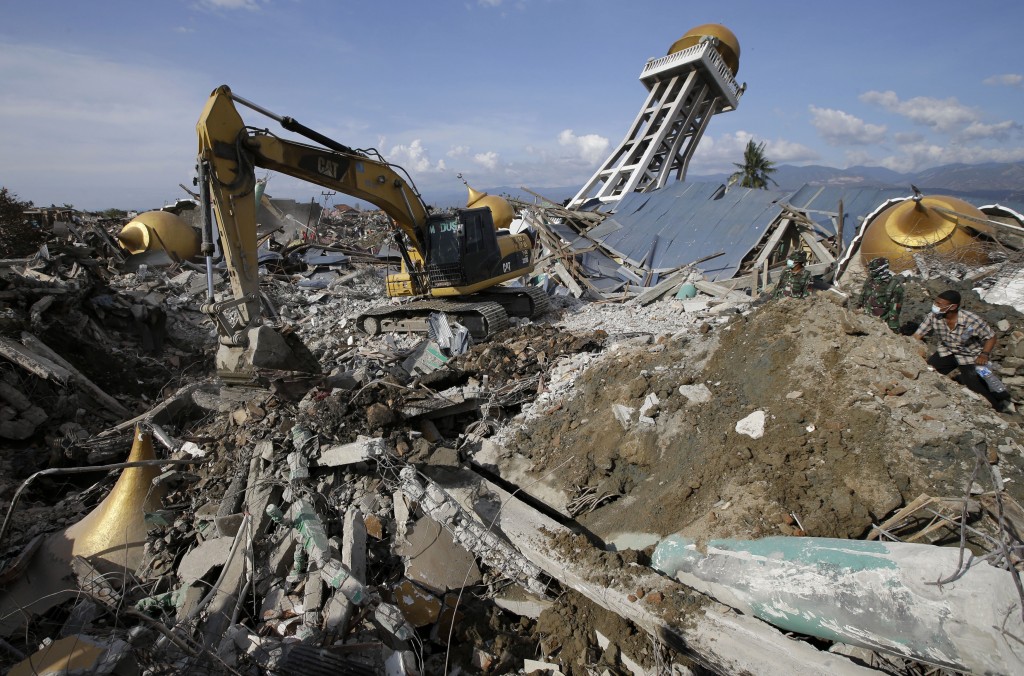 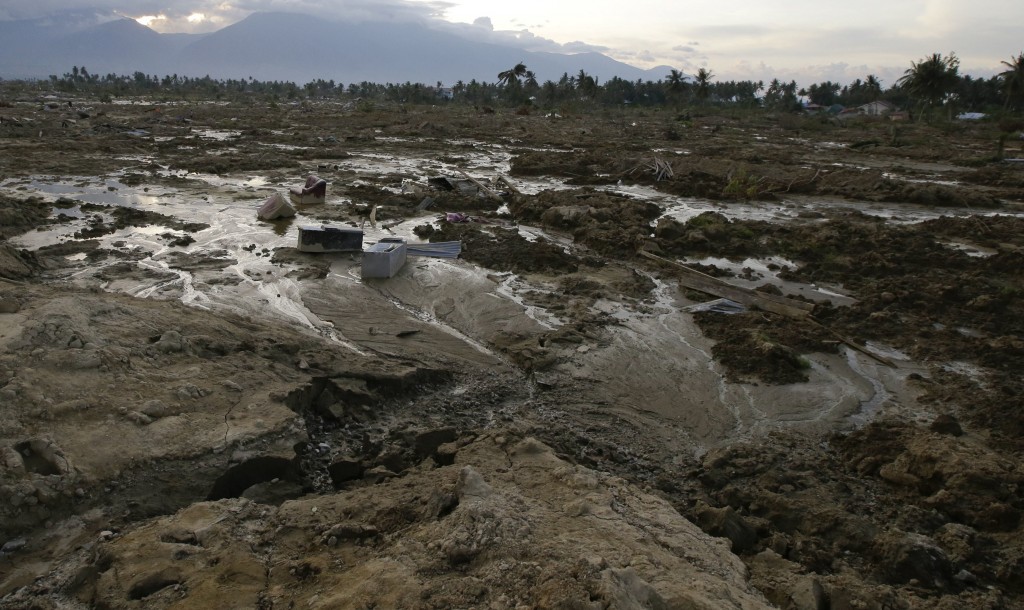 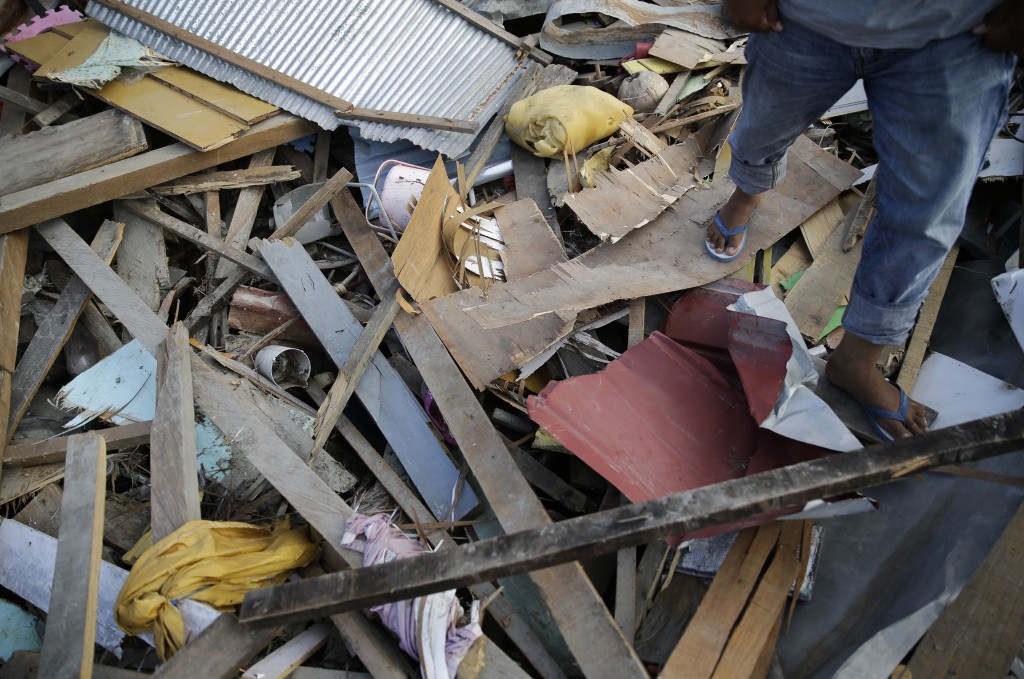 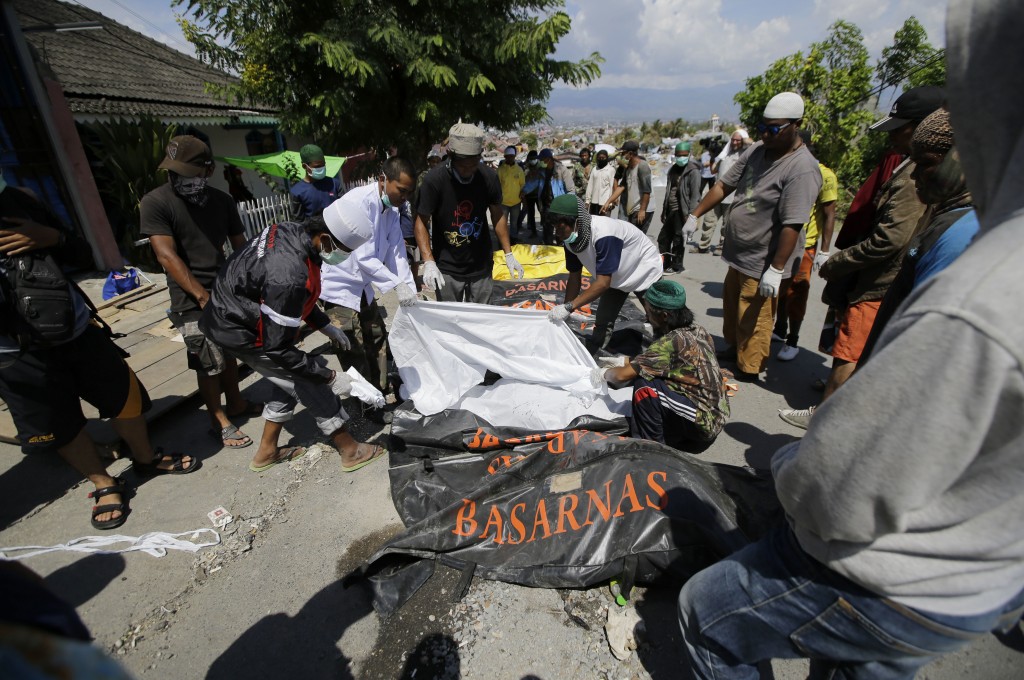 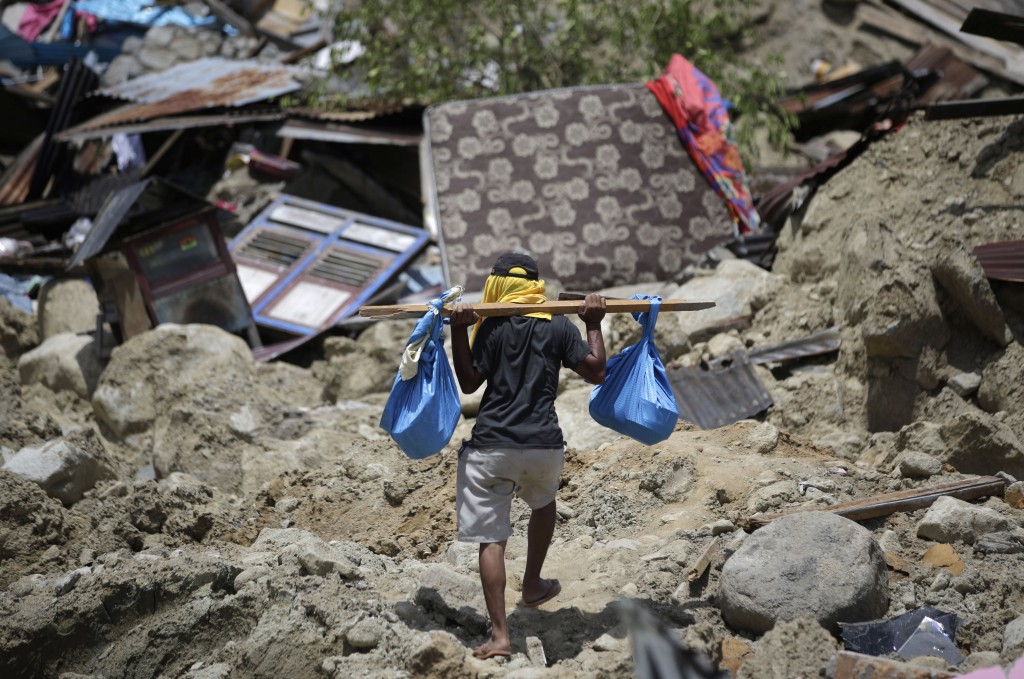 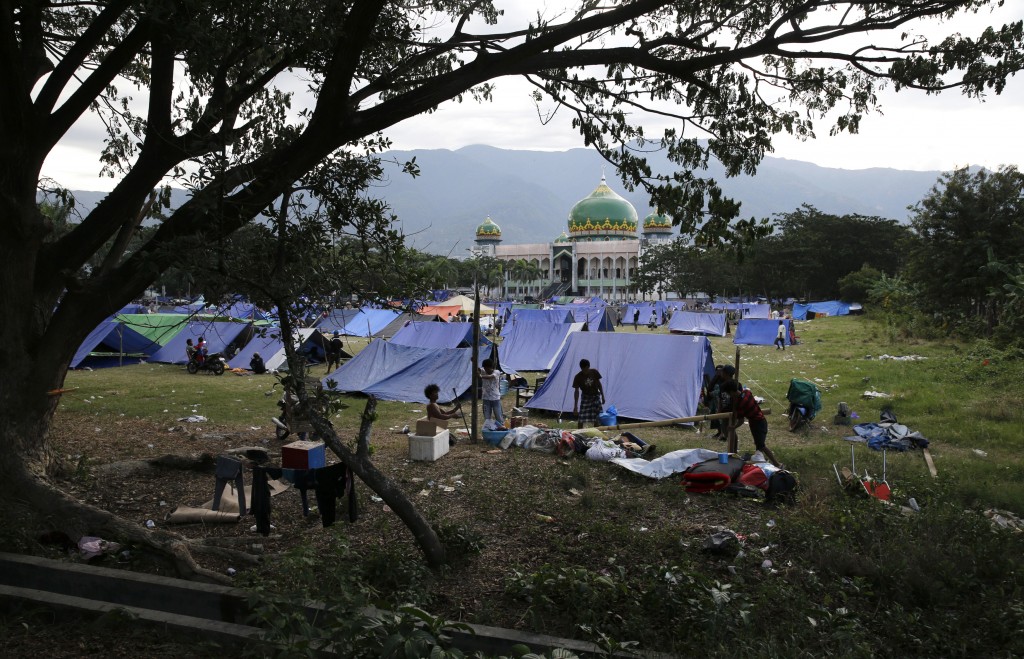 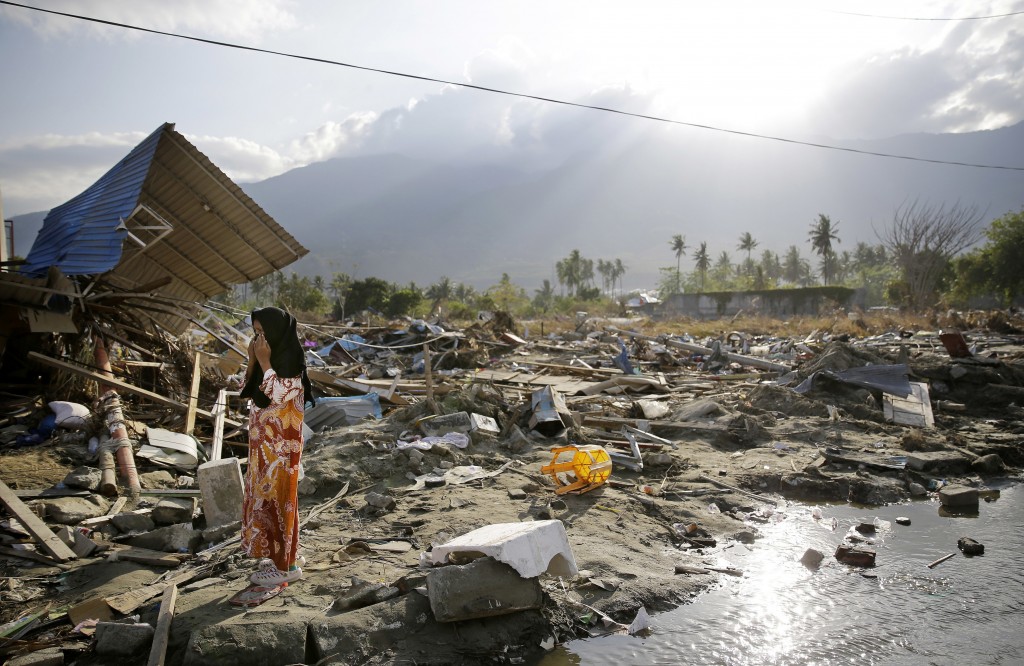 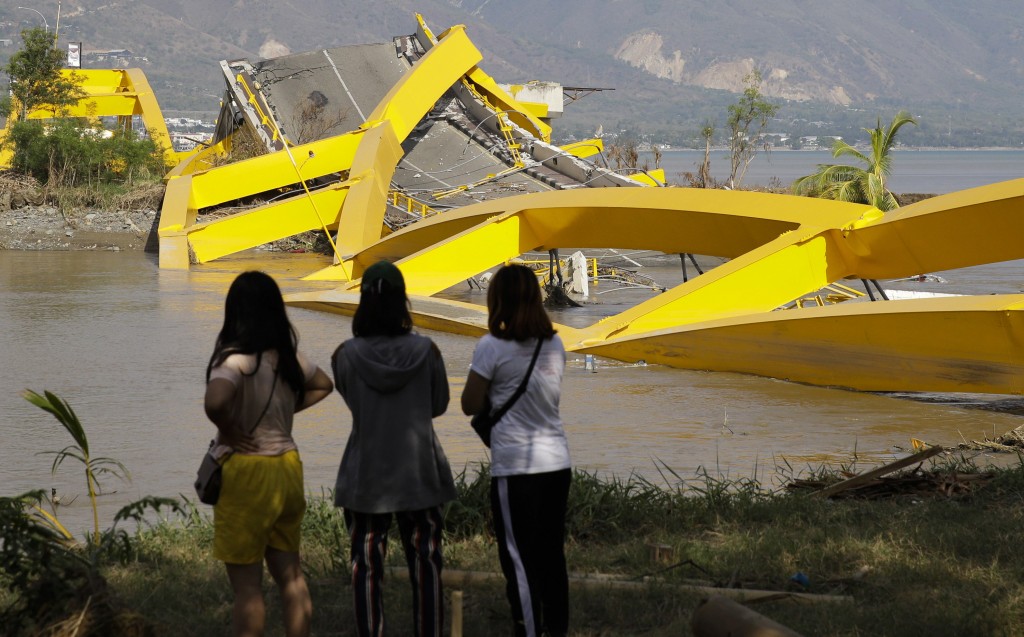 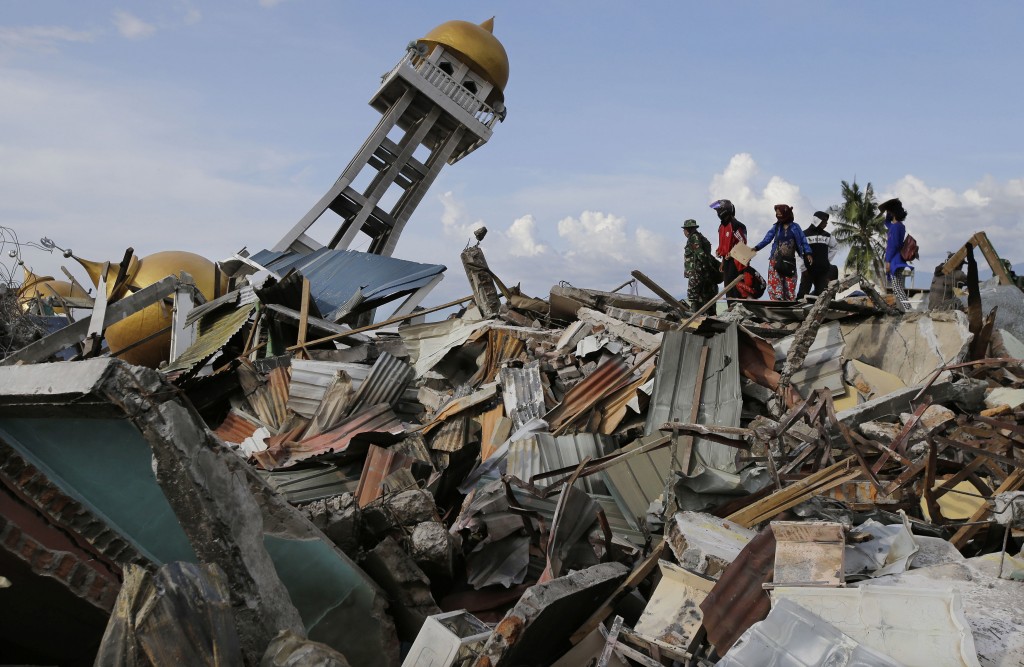 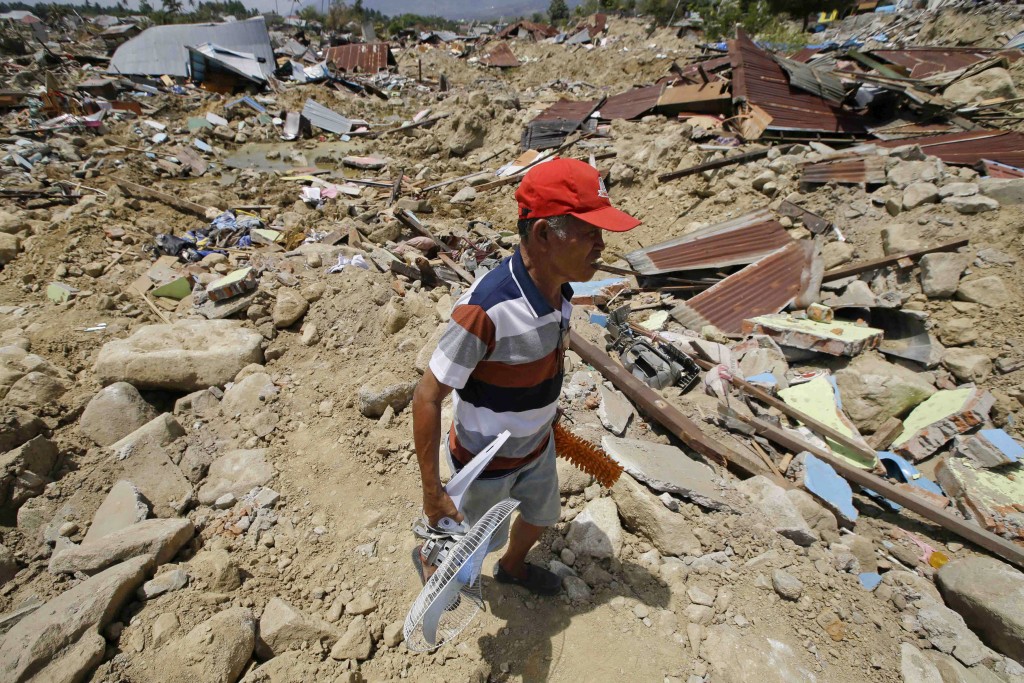 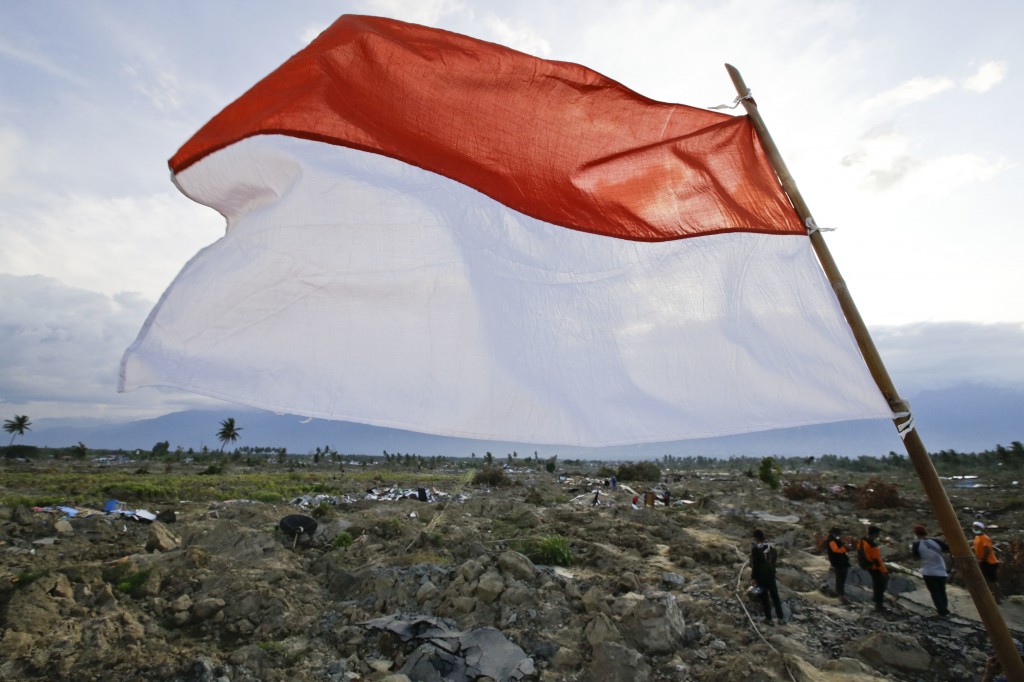 PALU, Indonesia (AP) — The Muslim call to prayer had just started echoing across the Indonesian city of Palu when Musrifah's home began to shake violently.

Family photos fell from the walls. Dishes and glasses crashed to the floor. A television smashed onto the white tiles of their living room, prompting Musrifah to scoop her 2-year-old son into her arms.

Seconds later, the concrete sides of their one-story house cracked, then crumbled, filling the air inside with pale clouds of dust.

"Mommy!" the terrified boy cried, his body trembling as his hands pressed into her back.

It was 6:02 p.m. on Friday, Sept. 28, and what followed over the next 10 minutes was a catastrophe remarkable even by the standards of disaster-prone Indonesia. The magnitude 7.5 quake triggered not just a tsunami that leveled coastal neighborhoods but also a geological phenomenon known as liquefaction in which the soil began to move like a liquid and swallowed entire neighborhoods into the earth.

The disasters would kill nearly 2,000 people. Thousands more would go missing. Among them was Musrifah's son, Bima Alfarezi.

Growing up on the island of Sulawesi, where Palu is located, Musrifah had grown used to earthquakes. Indonesia, a vast archipelago of 260 million people, is located along one of the most seismically active regions of the world, an arc of volcanoes and fault lines in the Pacific Basin known as the Ring of Fire.

Though they could be scary, quakes in Palu rarely caused severe damage.

After a 2004 tsunami killed 230,000 people in a dozen countries, more than half of them in Indonesia, the threat of deadly waves was seared into the national imagination. But Palu had not experienced one in Musrifah's lifetime, and most people believed the city was safe because it sits at the base of a long, relatively narrow bay shadowed on both sides by lush mountains.

"We thought that would protect us" from the violence of the sea, said Musrifah, a nurse who like many Indonesians uses a single name.

And few here, if any, had ever heard of liquefaction.

So when five foreshocks with magnitudes ranging from 4.8 to 6.1 shook the area over the course of several hours that Friday — the first hit at 3 p.m. — Musrifah thought little of it. She had family visiting and dinner was soon to be served.

Then the big quake struck and in the space of barely a minute, several neighborhoods in the city of 380,000 were obliterated. Buildings across town collapsed, including a hotel and a downtown shopping mall, where dozens of people were instantly killed and others were trapped and crying out for help. Cellphone towers buckled, knocking out communication lines, while the control tower at the airport crumbled just as a final plane took flight.

Although much of Palu still stood, chaos was everywhere.

At Musrifah's home, close to the shore of Palu Bay, her family rushed onto an open-air terrace only to find it blocked on all sides by the rubble of collapsed homes.

Still cradling her son, she thought the worst was over.

The shallow quake was 200 times more powerful than the atomic bomb U.S. forces dropped on Hiroshima during World War II, according to Indonesian authorities, and it triggered a massive tsunami that was barreling straight down Palu Bay.

A man filming the scene from a parking garage yells to those below: "Tsunami! Tsunami! ... Run! Go!"

As people shriek and panicked drivers honk, people can be seen running and climbing over walls to get away from the beach.

When the wave crashes through the shore, it sweeps up maroon-roofed homes, spins them around and smashes them into swamped vehicles. As the houses break apart, swirling in a dark soup of debris, the man begins to weep: "Oh God! Oh God!"

Trapped on her shattered terrace, Musrifah had no idea what was happening. The sea had burst through what was left of her home, and her family was standing in water rising above their knees.

Her only thought was escape. She squeezed her son tighter as he repeated: "I'm scared, Mommy, I'm scared."

Two minutes later, Musrifah heard another roar. Instinctively, she looked up toward the sky, above the rubble that blocked her way, and glimpsed a dark wall of water, its approaching crest towering just above a palm tree.

Before she could blink, the wave smashed down on top of them and everything went dark. The crushing force of the tsunami ripped Bima away and spun Musrifah upside down in the churn.

Under the water, she grabbed hold of a concrete slab and was able to free herself from the wave. By then, she had been carried a kilometer (half a mile) away.

Soaked and shocked, all she could do was call out, her haunting cries piercing the darkness: "Bima! Bima! Where is my Bima?"

The earthquake and tsunami hit the coast with such power that the massive yellow spine of the city's iconic yellow Teluk Palu Bridge snapped, sending it into the river below. Along both sides of Palu Bay, the coastline was littered with smashed vehicles, jagged slabs of debris and downed electricity poles.

All that was left of Musrifah's home was its foundation. Not a single possession remained.

Two kilometers (a mile) inland, as the earthquake shook the city's Balaroa neighborhood, residents faced an entirely different calamity, what many later described as a tsunami made of soil.

As the ground cracked apart, mud and dirt moving like liquid erupted through newly carved chasms, bursting through the floors of homes. It was a swirling sea of mud and rolling waves of earth that rose up and swallowed virtually everything in sight.

Multi-story villas were knocked onto their sides with cars still in their garages. The towering golden spires of one of the area's most beautiful mosques crumpled in ruins.

As twilight gave way to blackness, numerous fires broke out and would burn into the night.

The phenomenon known as liquefaction occurs when loose water-filled soil near the surface loses its strength and collapses. In places in Palu, parts of entire neighborhoods were carried dozens of meters (yards) to the east.

Balaroa resident Asran had been feeding his goats when the quake hit and he looked out in astonishment to see a chunk of his own neighborhood literally breaking away. When the ground stopped moving after a few minutes, his home — severely cracked but largely intact — sat on the rim of a fresh crater that dropped nearly two stories down

"The mud came from underneath, lifted all the buildings, then sucked them down," said the 56-year-old, who uses a single name. "It seemed as though the ground was on a roller-coaster."

Half an hour drive to the east, in the even harder-hit neighborhood of Petobo, 32-year-old Erli Yati, tried to flee on a motorcycle but only made it a short way because "left, right and back, the soil was raised above me."

"People were screaming, 'Help! Help!' but it was impossible to help them," she said. "They were being dragged away by the mud."

Video circulating on social media that appears to have been shot in Petobo shows a red-roofed home sliding past a bank of palm trees as if it is sailing down a fast-flowing river. In the distance, two palm trees are rapidly sucked straight down into the earth, one after the other, before the house the man filming the scene is straddled upon begins swaying like a boat on the ocean.

After several terrifying minutes, it all finally stopped.

All that is left of much of Petobo now is a jagged plain of mud and soft dirt that, like Balaroa, sits in a newly created crater. Along the edge, a once-flat rice field now zig-zags up the hillside as if was taken apart and replanted on multi-story terraces.

The government says more than 5,000 people may be missing from these two neighborhoods, where more than 3,000 homes were either destroyed or disappeared.

Extracting the bodies is so difficult authorities are debating whether to simply turn the devastated areas into mass graves.

Back along the shore, Musrifah followed droves of other traumatized survivors along darkened streets to a nearby mosque that quickly turned into a relief camp.

It was there, just after midnight, when Musrifah was reunited with her husband Hakim and their 5-year-old daughter who had been out together before the earthquake.

The couple held each other tight and wept.

Then Hakim asked the question Musrifah didn't want to hear: "Where is our son?"

"I couldn't hold onto him," she said. "I'm so sorry. I couldn't protect him from this."

The next morning, the couple combed the area around their former home, now a flattened field of intertwined lumber, concrete, sheet metal and other rubble.

For five days, they walked through wreckage, calling Bima's name as emergency crews pulled bodies from the debris.

They visited every hospital in the city, asking officials to unzip bag after bag containing the corpses of young children. There were too many, it seemed, to count.

None of them was Bima.

Then, at midday Thursday, something inside Musrifah told her to look in a mangled pile of debris about 200 meters (yards) from where their house once stood.

Almost immediately, she saw a little body pinned face down between a gas canister and a shredded pile of wooden beams. The boy was wearing a dark gray shirt and turquoise pants, just like Bima was the day the tsunami snatched him from her arms.

His bloated body had decomposed so much, though, it was not possible to recognize his face. But when she saw the blue Ultraman sandals on his feet, she was sure. It was him.

An hour later, an emergency crew placed him in a black body bag and zipped it shut. And then Musrifah did something she had dreamed of, and dreaded, for almost a week.

She put her arms around her son, and hugged tight.